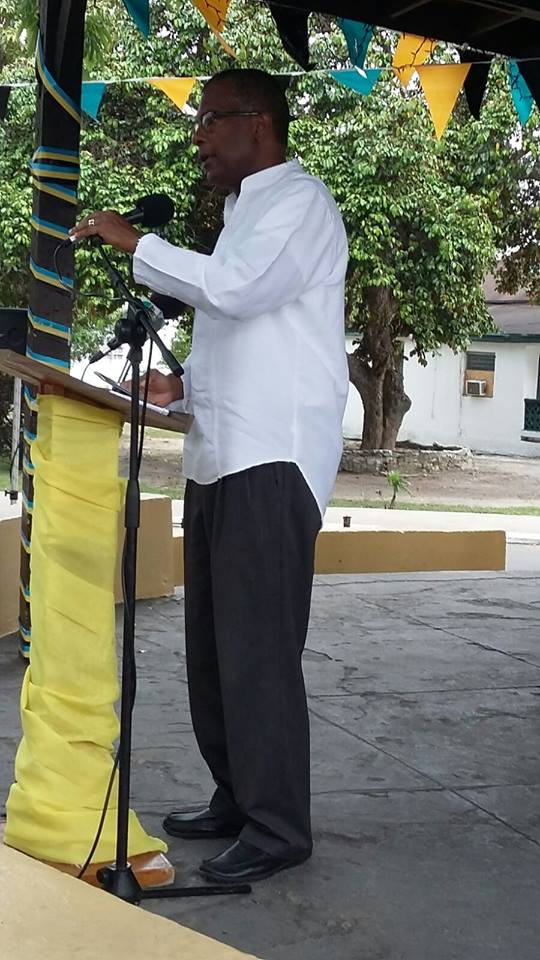 Here is the full statement:

Today marks 182 years since the slaves were set free by the British throughout their then empire. The Bahamas was a part of that and history tells us that the act of emancipation was celebrated and marked every year since then. Today we mark the occasion once more.

I welcome you here to mark this momentous occasion.

I invited a friend of mine to this event and he refused. He said that he would not come to a celebration of the British freeing the slaves. He found the idea repugnant and not worthy of celebrating.

I disagree with him. It is a part of our history. It is not a celebration of what the British did as if freedom was accomplished by them. We are here to mark what he slaves did and the former slaves, the sons and daughter of Africa who led the revolts and forced the end of slavery and began the larger fight for the humanity of the Black man in this world.

You know that the fight continues today.

The Bahamas is a part of the Caricom movement for reparations for slavery. Many people have asked why we are wasting time, that it’s not a struggle worthy of our time and money that it cannot succeed.

With respect that is what those who fought against slavery were also told. But our ancestors did not give up the quest to be free.

The next most momentous occasion on that freedom calendar was when in 1967, the majority African population of this country obtained Majority Rule. And the end of the white oligarchy and the beginning of true representative democracy.

Fox Hill, the village today, made up of Congo Town, Burnside Town and Nango Town is one of the last redoubts of the African culture in its purest forms in The Bahamas. The history tells us that Samuel Fox was given a grant of land in the vicinity of St Augustine’s College in 1703. That grant and the surrounding villages morphed into what is now known as Fox Hill. We are the last community in The Bahamas to celebrate Emancipation Day. In doing so we celebrate the African presence in The Bahamas.

Today then I salute our ancestor who caused us to be free.

In a particular I pay tribute to my predecessors George Mackey and Frank Edgecombe who revived the modern Fox Hill Festival as a means of marking the occasion. They are now both gone on to their reward but both had me promise that I would continue this tradition.

I remember also today the former Chair of the Fox Hill Festival Charles Johnson, Eric Wilmott and William Rahming who gave of their time and talents to ensure that this Festival would be successful.

We remember too Mrs. Paula Tynes who at her husband’s side continued the work of the Festival. Sadly she too is gone too soon. We thank Mr.Maurice Tynes and his whole team for all the work which they do to make this the success that it is.

You all know that The Bahamas is part of the effort by Caricom to seek reparations for slavery. Many people have asked us why we are wasting time, money and effort.

The former British Prime Minister David Cameron insulted the leaders of the Caribbean when he went to Jamaica and rejected the idea of the British paying reparations and told the Jamaican Parliamentarians they must quote “get over it”.

I recall a story that I read about Georgetown University, the Catholic Jesuit School in Washington D C which produced the basketball player Patrick Ewing. Georgetown University had a mortgage in the 18th century and the mortgage was about to go into default. In order to save the University they sold their slaves to a planation in Louisiana. The three million dollars they made from the sale was able to save the university from bankruptcy.

The New York Times reported earlier this year that the head of the University, responding to the moral shame in which the university was involved sought out the descendants of the slaves that were sold and began talks about what can be done to make amends for the moral shame in which they were involved. So you see that the great Georgetown University was literally saved on the backs of African slaves. That was a moral wrong. Slavery was a moral wrong. That is what the quest for reparations is about to compensate for the moral wrong. It will never end until justice is done both in America and here at home and in the wider Caricom region. The cry will always go up for justice.

The legacy of racism still abides with us. Majority Rule came in 1967 but still some people who were associated with the acien UBP regime, do not get it. When I say do not get it I am reminded of the interview with Newt Gingrich, the former Speaker of the United States House of Representatives who said that he gets it, that he understands what black people in the United States go through every day of their lives and that white Americans cannot understand what it is to be black in America. If he gets it and he is a white man from Georgia and one of the most conservative people you can meet, then we have to ask why don’t the descendants of the ancien regime, those who ruled us before 1967, don’t get it.

They too have told us to get over it.

The only and marked exception to that attitude is that of Sir Durward Knowles who has publicly apologised on no less than four occasion to black people in The Bahamas for how they were treated by white people.

Recently though we have evidence that many don’t get it. One example is from a man who is a former Deputy Prime Minister of our country, who went to a segregated school as a child in this Bahamas, who has no experience of being a young Black male or having young Black male children tells us that we should not have warned out children and their parents about the dangers they face in American when they travel and live there as young black males dealing with US policemen. Scores of parents have thanked us because they get it.

Last week, the country was astounded as one of their lot now a Member of Parliament Richard Lightbourn without thinking about what he was saying, about who he is and what he represents in the history of our country, blithely suggested that women should have their tubes tied involuntarily, completely insensitive to the larger meaning of what he was saying and closing his eyes to the obvious issues that would cause.

That here was a White Bahamian, tied to the old UBP regime, whose doctrine was racial discrimination, saying in effect that black women were having too many babies and it should stop. It’s what you call a dog whistle. My mother used to say, even if you think that, there are some things you just don’t say.

Since then he has apologised but no one for a minute believes that the apology was anything more than a politically correct patch up job that was uttered because it might adversely affect his political fortunes.

There ought to be sanctions for that and he ought to consider whether it is advisable for him to stay on as a MP for the Five Pound Lot and for Kemp Road in the circumstances of his statement.

There is an example of what to do from the United States. When the former Majority Leader Trent Lott made a statement in which he supported the segregated South in America, the then US President George Bush from his own party disassociated himself from the remark and Mr. Lott not only lost his job as a Majority Leader but as a Senator as well. It seems to me that this must follow in The Bahamas.

The organization to which he belongs must make that clear and fully dissociate themselves from it. They must ensure that he does the appropriate thing in the circumstances which is not to return to Parliament and give another person a chance in that seat.

Some have drawn this as a matter of women’s reproductive rights and the freedom to choose. I am sure it is that and I agree but there is something much larger at stake here. The racist element in it cannot be overlooked. Even if it were not intentional, closing one’s eyes to the obvious shows the disregard for the humanity of the African people of this country and women of African descent in particular. It is so serious that it must not be overlooked.

Remember the history of calls for forced tube tying, with experiments on aboriginal peoples in Australia and in the United States; the report of Peter Knaur in the early 1960s who advised the pre 1967 government which unveiled a plan by the then oligarchy on how to keep people of African descent in this country under the domination and control of the minority ancient regime.

I have said many times before that we teach our young their history not because we want them to be prisoners to it but so that when they see it repeating itself, they why will know and recognise it and stop it dead in its tracks. That is what we see here today. 2016 is not that far away from 1834 in that context and those in that time who said the slaves should not be freed.

And so I wish you all a good day. I hope that you remember this day as a tribute to the men and women of African and other descent who went before us to ensure that we are free.

This is likely the last time I will be addressing you on this theme and certainly on an Emancipation Day before I have to return to you and ask for permission to stay on in this job. It has been an enormous privilege and pleasure, an honour, and I must thank you for the privilege of serving. It has been my honour.

May mighty God bless you, bless Fox Hill and bless the Commonwealth of The Bahamas.