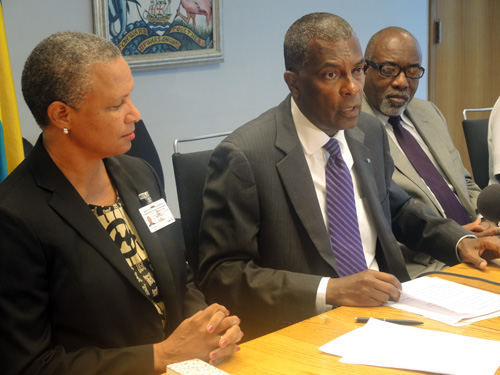 I am responding this morning to a number of events in connection with immigration in The Bahamas.

cialis sale prescription times;”> This is prompted by a report in this morning’s press quoting statements on immigration by the former Minister of State Zhivargo Laing. There was also a report on an immigration check at the Straw Market which took place yesterday.

purchase times;”> I want to say that the statement by Mr. Laing is the second such statement by him within a week on the subject of immigration. This morning’s statement was a more general philosophical statement about the nature of migration and the value to the economy than the earlier statement. Both however require some response.

Mr. Laing was reported to have said the following in The Tribune two days ago 22nd June: “Unless there is a liberalization of the immigration policy… we can expect, without some significant foreign investment taking place, this stagnation in the Grand Bahama economy for a very long time.”

I am appending to this statement and an earlier statement that I made in response to comments made by the former head of the Chamber of Commerce Dionisio D’Aguilar who made similar comments with regard to The Bahamas generally.

I am quick to respond to these because I do not want the impression to be given here or overseas that The Bahamas has an immigration policy which is a retardant to foreign investment
It is not. There is no policy by the Department of Immigration or the government which retards economic growth or development. Indeed, I say again that no business can legitimately complain that they cannot get the workers they need to run their businesses if it requires the permission of the Department Of Immigration.

Some people complain legitimately about matters taking too long. The real issue there has to be identified. The reason for delays has to do with resources and capacity – not the policy. This country is an easy country to migrate to lawfully. We admit there are issues in capacity to respond as timely as we would like but there is no policy which stops a legitimate migrant from coming to The Bahamas.

This brings me to the second part of the statement of Mr. Laing in today’s paper

He is quoted as saying that whenever governments become unpopular they start to be reactionary and panic and say whatever it takes to make the people happy again.

I wish to assure the public that the immigration policy of The Bahamas is not a panicked reaction, nor is it reactionary.

We came to office by our Charter or Governance promising to fix the immigration problem.

We could not for reasons of national security have our borders constantly breached by thousands of people who simply jumped on a boat and came into The Bahamas without permission. We have taken measures in the national security interest of our country to put a stop to it.

If we followed the advice of Mr. D’Aguilar and Mr. Laing, it appears that we should do nothing and allow people to breach our border without let or hindrance.

That cannot stand. Not on my watch. I am pledged to defend the sovereign integrity of The Bahamas and to the best of my ability and with the help of God I will.

Now an update on the immigration checks and repatriations:

The Department of Immigration is continuing operations throughout New Providence and The Family islands, the goal of which is to ensure that every immigrant have a legal right to live and work in The Commonwealth of the Bahamas. As a result of intensive efforts an operation was conducted on Bay Street and the Straw market for Status check. This resulted in the arrest of 21 persons of various nationalities. Nine (9) persons were committed to The Detention Centre. The other twelve persons were released after paying delinquent work permit fees.

We sincerely thank the Bahamian Citizens in providing us with very good intelligence of persons working in a number of key business establishments and various areas. The information given has led to a number of arrests of persons who were subsequently repatriated.

We will continue to check the market from time to time.

The Immigration Act has recently been amended enabling charges to be brought against persons for the Harboring of illegal Immigrants. An illegal Haitian boat landing occurred in Bannerman Tow Eleuthera on 3rd June 2015

As a result of this, Three Haitians namely Sinfilien Remy, Estilus Tide and Robenson Guerrier who held valid work permits were charged in the magistrate court on the 8th June 2015 for Harboring illegal persons as they were found with 10 persons who had illegally landed. They pled not guilty and they were remanded to the Bahamas Department of Corrections to reappear in court on 13th July 2015. In addition, A Bahamian citizen Frankie Smith was charged on 8th June 2015 also with Harboring illegal persons as he was found with 14 persons who landed illegally of that Haitian vessel. He also pled not guilty and was granted $1500 bail to reappear in court on 16th September 2015.

On the 9th June 2015 Antoine Armad the boat captain was charged with Knowingly Assisting in illegal landing. He pleaded guilty and was subsequently convicted to two years imprisonment or two thousand fines. Deportation was recommended upon payment of fine or served time. His fine was not paid and he is serving sentence at The Department of Corrections.

Additionally, Frankie Pierre another boat captain was charged in Magistrate’s court number 8 for Assisting in illegal landing. He pleaded not guilty and was remanded to Department of Corrections to reappear in court on 13th July 2015.

During the Immigration and Police search operations based on intelligence where illegal migrants were hiding out, a Haitian male Jean-Mary Justilien was apprehended and tried to escape lawful custody which resulted in him obtaining some injury. After checking our records, he is an illegal immigrant. As a result, he was charged in the magistrate’s court on for illegal entry. He pled not guilty and was remanded to Department of Corrections to reappear in court on

The Department is continuing its repatriation exercises on a weekly basis.  Presently there are a total of 180 persons   detained at Detention Centre 139 of which are Haitians. Additionally six (6) persons are detained at the Safe House Three (3) adults and (3) children.

Repatriation of persons from June 1st to 23rd totaled 420

There is one (01) each of the following nationals: Indian, Peruvian, Mongolian and Bangladeshi