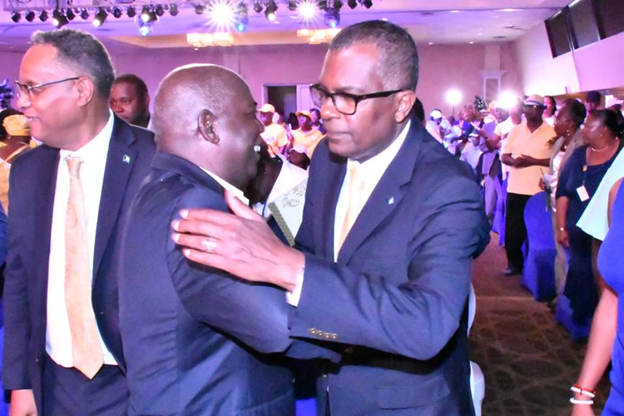 *Chairman of the Progressive Liberal Party*

On the 53rd. Convention of the PLP

On behalf of the Leader, the Deputy Leader and officers of the PLP, I wish to thank all the many PLP supporters and well-wishers for their support, hard work and prayers during this past week as the party met in its 53rd convention.

This convention was in many ways a watershed event for the party. It solidified the transition to a new leader arguably for only the third time in its 64 year old history; it saw the historic participation of people from across the country from all age demographics in the convention; it cemented a commitment to rebranding and rebuilding the PLP.

The PLP’s constitution says that its number one aim is make the PLP the Government of The Bahamas. In that aim the party is recommitted coming out of convention.

We thank all Bahamians for their well wishes and their desire to see the party once more take its place as that great influencer of public policy, and the defender of our national independence and sovereignty. There was also a renewed commitment to economic empowerment.

In thanking all people generally, it is appropriate to say thanks to the outgoing Leader of the Party the Rt. Hon. Perry Christie for his tireless efforts toward building a better PLP and country.

I say a special thank you to my immediate predecessor Bradley Roberts for holding the fort as the defender of the PLP faith for so many years.

Our party showed the country how to conduct an internal election without rancour and with grace. All of the candidates deserve the praise for the manner in which this election was conducted. Congratulations to the winners of the principal offices Leader Philip Brave Davis, Deputy Leader Chester Cooper, Deputy Chairman Robyn Lynes. Grateful thanks to Mrs Glenys Hanna Martin, Dr. Erecia Hepburn, Mr. Obie Wilchcombe, Mr. Glendon Rolle and Mr. Ricardo Smith who were candidates in the competition for those offices.

A word must also be said to the FNM, who are now governing with a large but assailable majority. The evidence over the past week is that the FNM just does not get it. Their press releases in response to the PLP’s convention were filled with silly, childish invective, forgetting that they are now a governing party and not a set of children in a playground throwing mud pies at one another. The FNM’s National Chairman should be well advised to conduct himself and to use language which is at the level which matches their role in the country and not down in the gutter. The PLP is dedicated to the debate and the critique of public policy. We want better laws. We want our people treated fairly. We want the FNM to stick to their promises to the Bahamian people. Their responses over the past week were disappointing.

Having said all that, the FNM should be assured that we will meet them at every corner and on every street, in every island in the nation in the battle for the supremacy of ideas and in the competition for the hearts and minds of our people.

I extend my personal thanks to the Leader of the PLP Philip Brave Davis for seeking me out for this special work of Chairman and I trust that I will be equal to the task. I thank in particular those people who rallied to the cause from across the country, old friends and new allies. I single out the people of the Fox Hill Constituency PLP Branch who continue to watch my back and of course my siblings Ian, Carla, Mathew and Marva.

God Bless the Commonwealth of The Bahamas.