MOUTH CAN SAY ANYTHING 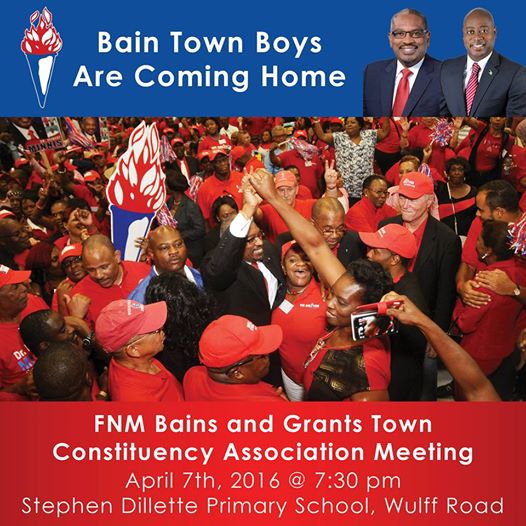 The old people used to say that mouth can say anything.  That is what you have to write in answer to the assertions made by Dr. Hubert Minnis, the Leader of the FNM, at a meeting held by his party in Bain Town to introduce the candidate Lionel Sands to the people as the next candidate for the FNM.  Mr. Minnis claimed that not only was Bain Town going to go the FNM but that Tall Pines ( Leslie Miller ) and South Beach ( Cleola Hamilton) were all going FNM.

This is a man who does not know that he is neck deep in do do. He does not have the support of his own party. Every week there is some disclosure or other which shows his fundamental weaknesses as a Leader and the lack of confidence which the FNM itself has in him.  The Nassau Guardian Thursday 7 April’s Front Porch pieces slew him and cut him to pieces.  That column is a spokesperson for the establishment of the FNM and believed to represent the views of Hubert Ingraham, the former Prime Minister.

Meanwhile on the front page of the Nassau Guardian that same day was Frank Watson, the former Deputy Prime Minister of the country and former Deputy Leader of the FNM lamenting the two choices for Chairman of the party: former MP Sidney Collie and perennial gadfly RodneyMoncur.  He said that there had to be better choices than that.

We agree that a party is in a sad state when it has to consider Rodney Moncur as a possible candidate for Chairman of a national party.

Over at The Tribune it was not much better.   Fred Smith’s little pal Adrian Gibson was defending Rodney Moncur as the best choice for  FNM Chairman, using the argument that he could match Bradley Roberts in grass roots appeal.  That came off as the laugh of the week.   Mr. Gibson can’t be serious.

We keep asking ourselves what are these people doing.  They are slashing and cutting one another in public. It seems clear that they don’t like each other particularly.  Yet this is the same crew who says they want the people of The Bahamas to  give them the opportunity to govern next year.  They must have a  hole in their heads.  Their heads are certainly buried the sand.  There are none so blind as those who will not see.

The PLP’s best friend at the moment is Dr. Hubert Minnis.  He steps into one pile of do do after the next and doesn’t seem to realize the mess that he is in.  The problem is that the PLP cannot at the same time think that it will coast to victory.

Preliminary steps are being taken soon  to deal with that issue and we hope that it does in  fact involve the United States IRS  and that the money is cut off.

These are treacherous times.  Mouth can say anything.  But the PLP needs to get started with trying to win this election and not simply coasting on the coattails of FNM failure.

A day in politics is a long time and the tide can turn quickly.