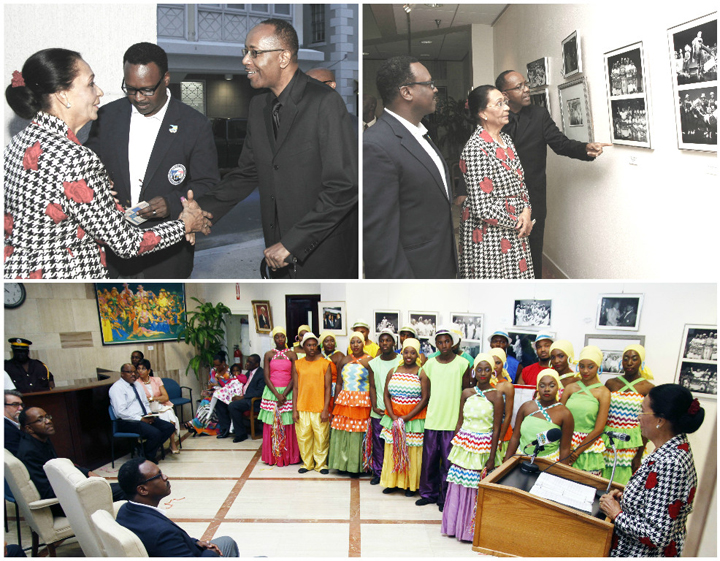 NASSAU, The Bahamas  18  September — The Bahamas National Youth Choir celebrates 25 years of service to arts and culture in The Bahamas.  On September 17, they performed for the Governor General of the Commonwealth of The Bahamas, Her Excellency Dame Marguerite Pindling and invited guests on the occasion of the Official Opening of their 25th Anniversary Exhibition at the Central Bank of The Bahamas.

Dame Marguerite applauded the consistent excellence of the award-winning choir over its 25 years, under the direction of Cleophas R. E. Adderley, establishing it as a cornerstone of Bahamian cultural achievement and an inspiration to all.

She said: “In the highly technological age of instant information exchanges, never- ending product upgrades, relentless drives to move swiftly on to the perceived next best “thing”, be it economic, religious, political or cultural, it is reassuring to have constant elements in our society on which one may rely.  As the Bahamas National Youth Choir celebrates 25 years of service to our beloved Bahamaland, it has become one such constant and reliable element in the field of arts and culture,” said Her Excellency Dame Marguerite Pindling, Bahamas Governor General.

“Twenty-five years in any undertaking is a relatively long period of time, and this is no less so with cultural endeavors.  This celebration therefore is indeed a laudable milestone worthy of recognition and commendation.”

Dame Marguerite said she recalls attending the first concerts of the fledgling choir when she and her late husband and were the choir’s first patrons.

“It pleases me tremendously to observe the maintenance of high standards, decorum, and the consistent presentation of excellence by the choir during the ensuing years,” said Dame Marguerite.

“It is no surprise, therefore, that the Bahamas National Youth Choir is the recipient of numerous local awards, including The Bahamas Government Silver Jubilee Award in 1998 commemorating the 25th Anniversary of Independence and the Ministry of Tourism’s Cacique Award in 2011 for excellence in the creative arts.”

Dame Marguerite also said the choir is the recipient of numerous international awards including two awards at the Seventh China International Chorus Festival in 2004 and two gold medals and a silver medal at the 2012 World Choir Games in the United States of America.

“The Choir has performed for many Heads of State, among them, Her Majesty Queen Elizabeth II and the late Dr. Nelson Mandela.  Additionally, the singers gained international acclaim having locally performed at The Federation of International Football Associations World Congress in 2009, and the 2015 CARICOM Heads of Government meeting.  The accompanying band performed their joyous mantra “Celebrate” at the 2009 Miss Universe Beauty Pageant held at Atlantis, Paradise Island before an audience which is estimated to have had about one billion viewers,” said Dame Marguerite.

“The Bahamas National Youth Choir is said to be the most recorded choir in The Bahamas with nine releases of commercial compact discs.  It has therefore, quite rightfully, become a feeder-source for other choirs, as well as a training ground for choir directors, instrumentalists, solo singers, arrangers and composers.”

Dame Marguerite said the Bahamas National Youth Choir has been described as a passageway to musical and personal development.  She said also that it inspires its entrants to strive consistently for higher standards and excellence, education and global exposure.

“The Founder and Director of the Bahamas National Youth Choir has drawn from his personal attributes of being musically gifted, educated, culturally exposed and a man of spiritual integrity in the formation of the Choir.  Cleophas R.E. Adderley grew up surrounded by musicians and educators in the person of his late grandfather R.M. Bailey and his late

father Cleophas E. Adderley.  His inherent drive for excellence is why some refer to him as a “perfectionist” however these traits may, hopefully, translate into conduits which can contribute to the stability and advancement of our sovereign nation.”

“My heartiest congratulations are extended to Mr. Adderley, to the musicians, choreographers, staff, volunteers, costume designers, seamstresses, and tailors; and to all who have helped to advance the cause of this important national cultural institution.  May you continue to be successful in perpetuity,” said Dame Marguerite.

“I wish also to commend the Central Bank of The Bahamas for its foresight in hosting this and other similar exhibitions, over the years, to showcase the talents of our youths.  It is now my pleasure to declare the 25th Anniversary Exhibition of the Bahamas National Youth Choir officially open.”  (BIS Photos/Derek Smith)