The PLP Leader’s Press Conference | 1 May 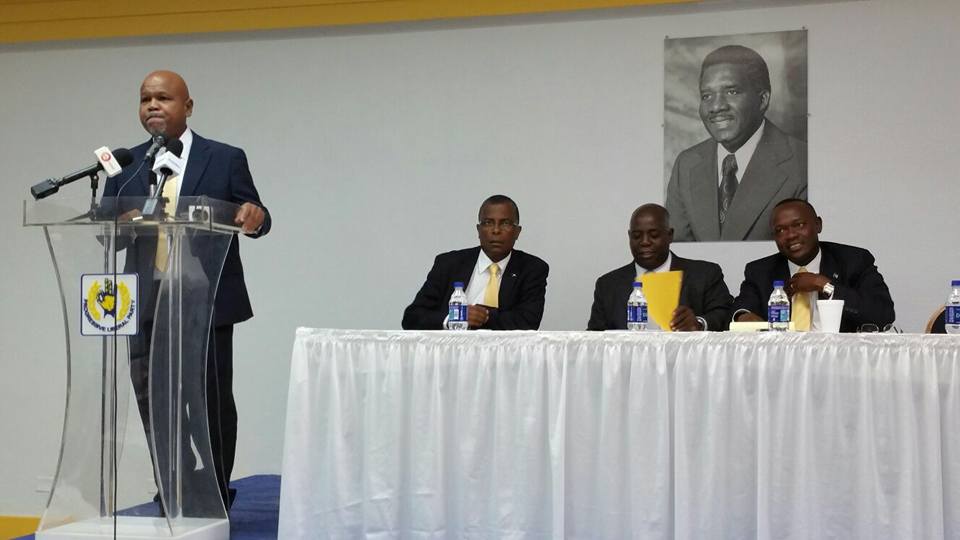 A pleasant good morning to the media, parliamentary colleagues and party officers. Thank you for coming.

It was reported that the regulations were suspended by cabinet conclusions but without a formal order of revocation order so how does the government compel civil servants to ignore the existing and valid regulations and not enforce them under these dubious and unclear circumstances?

The government claims that the suspension was driven by a 40% decrease in the fly fishing business. We disagree with this assertion. What empirical data can the government produce to support this assertion? Where is the annual reporting mechanism on the number of filed and approved applications year over year as an objective measure? We are reliably informed that the fly fishing business has never been better. Business 2017 was better than 2016 and 2018 year to date is better than 2017. Fishing lodge owners and operators, both foreign and Bahamian, have publicly confirmed that business is brisk.

THE INTERCEPTION OF COMMUNICATIONS BILL

The PLP has extensively communicated the rationale behind the Interception of Communications Bill. The Bahamas government had to necessarily modernize this 40 plus year old law due to advances in technology with email, cell phones, texts, whatsapp, Instagram etc.

The initial draft tabled by the FNM placed the authority with the Minister of National Security. This was unacceptable. The amended version places the authority with the Attorney General, another political appointee. We also find this unacceptable. This provision also flies in the face of the principle of an independent public prosecutor, a piece of legislation advanced by the FNM.

The approval jurisdiction must be the courts where legal arguments must meet strict and objective evidential criteria to qualify for approval by an independent body.

I would be remiss if I did not point out the rank and blatant hypocrisy within the leadership of the FNM on this bill.

Senator Ranard Henfield of We March fame had to say:

“If they pass this Bill, we won’t ever be able to organize another march or protest.”

“This (bill) is frightening and to my mind it’s no more than a spying act.”

“Let’s call their (the PLP government) spy Bill for what it is – an effort to gain a political advantage; for an oppressive government to use the power of government to intimidate and spy on Bahamians who would stand up to them.”

THE WHITE PAPER ON THE OVER-THE-HILL AREA

Since the tax concessions will result in obvious loss of revenue to the treasury, the government must explain how it intends to recoup or compensate for the revenue shortfall.

Since web shops and liquor stores are within the physical perimeter of over-the-hill, to exclude these businesses is inherently discriminatory and might be illegal, therefore subjecting the government to a redundant legal challenge. Why not have these businesses contribute to the community in some meaningful way as an alternative?

The government must say if this policy as envisioned by them will result in gentrification because the over-the-hill area sizable residential pockets occupied largely by the indigent on a rental basis. I point out that since there are high levels of unemployment and many homes off the electrical grid and without electricity, free wifi can only benefit those affected individuals if and when these more fundamental problems are addressed and solved. This project is different from the revitalization of downtown Nassau that is a purely commercial district. The few residential pockets are already upscale and high end.

A few pertinent questions for the government:

Has the government expressed how they will deal with the renting poor who will have to move out of these renewed areas?

Where will they go?

How will they afford housing?

Who will pay for them?

At the very least, this policy should answer these basic human rights questions.

As you are well aware, the FINANCIAL TRANSACTION REPORTING ACT is now before the Senate and the opposition has raised some concerns about the fairness and practical application of some of the reporting criteria and provisions in the bill, especially with respect to country’s friendly societies such as lodges (Elks and Masons) and other non-profit and NGO’s. The application of the rigid financial reporting requirements of large financial institutions such as banks and web shops also apply to our friendly societies and we believe this is burdensome to say the least. The decision of the government to protect general insurers by releasing them from this requirement is all the more reason to remove friendly societies from these rigid and burdensome reporting criteria.

The Progressive Liberal Party released a statement yesterday evening on these legislative concerns and I wish to reinforce our position. We received the assurances of the Attorney General that in the committal stage in the Lower House, the government would look at these concerns we raised.

“In the committee stage the Attorney General said that the Government would look at the matter again.

“Senator Mitchell said the act’s requirements will be burdensome for the friendly societies having to fill out know your customer forms and have compliance officers.

“The Bill now goes back to the House for further amendments and the PLP believes that all friendly societies ought to be removed from having to conform with the new requirements.

The Health Minister Dr. Duane continues with his penchant for describing the problems with the health care delivery system. While the Minister is on social media and talk shows describing the problems, there is a bed shortage, a medicine shortage and now the families of deceased loved ones cannot afford the hiked fee to have the bodies released for burial. He was in the media recently complaining that the bodies are piling up.

We now have another crisis in the public health system with what appears to be a mass sick out by nurses.

Concerns of the nurses that reportedly prompted the mass sickout include the following:

         Mileage not paid for staff at the Department of Public Health.

         Lack of opportunity for more training in specialty areas.

         Nurses are seeking an increase in on call allowance for family island nurses.

Additionally, Police Reserves, small, medium and large contractors are not being paid and Customs Officers transferred from their island of domicile are not receiving the requisite housing allowance from the government and are forced to live with relatives and friends. This again raises the question of the $1.7 billion borrowed by the government. What is the government doing with this all of this money if so many people are complaining that they are not getting paid.

I wish to advise that I will lead a delegation of party officers on a tour of Grand Bahama. It will be a fact-finding mission and listening tour. We will be meeting with community and civic leaders, business leaders and party officials who are resident there.

With that I will be happy to answer a few questions you may have.