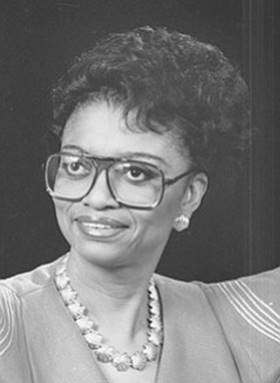 The Pro Cathedral of Christ the King

To be a happy one,

Of smiles when life is done.

Whispering down the ways,

Of happy times and laughing times

And bright and sunny days.

Of those who grieve,

To dry before the sun,

Of happy memories that I leave

When life is done.

My respects to Pastor the Venerable Archdeacon Harry Bain, other Ministers of the Gospel, the family of Christ the King and my dear brothers and sisters in Christ.

Firstly I wish to extend profound condolences to the Jones family on behalf of the Rt. Hon. Prime Minister and the Minister for Grand Bahama who are both attending CHOGM in Malta and on behalf of my immediate family and the family of the Progressive Liberal Party on the passing of our very dear friend of many years the late Hilary Vernie Elizabeth Jones.

The Jones family resided on York and Shirley Streets and my dad established the first coin operated laundry on York and Bay Streets a short distance away from the Jones’ homestead. This was many years ago so our families have been friends for many years.

As a boy I fondly recall watching Hilary’s uncle Henry Crawford conducting exercise drills on the Eastern Parade and Clifford Park with a cadre of young promising athletes including Thomas Augustus Robinson in whose honour our National Stadium is named. Hilary’s uncle has been credited with developing the finest track and field athletes in our Bahamaland. Track and field Hall of Famer and former Minister of Youth and Sports Neville Wisdom reminded me just yesterday that Hilary was a member of his track and field team.

I fondly recall a group of progressive young men organizing themselves into the Rockery Social Club and among other activities this club became renowned for hosting parties at various members’ homes. Hilary and her sister Joan attended those parties and it was at one of those gatherings that a relationship developed between Hilary and a very dear friend, the handsome and debonair Mr. Leslie B. Johnson of Chapel Street. That relationship produced Hilary’s only biological child, Trevor W. Johnson, who from day one became the apple of his mother’s eye.

During the sixties and seventies, many Bahamians embraced the opportunities to improve their fortunes and economic wellbeing in a new free trade environment in this fledging city to the north called Freeport. Hilary was one such Bahamian as was my older brother who migrated here in 1973. The rest as they say is history as Hilary took up the challenge and with vision, hard work, determination and self-confidence she became a defining personality in the Real Estate industry in Grand Bahama and a very successful entrepreneur.

As a corporate citizen and community leader, Hilary and her dear sister Joan positively impacted the lives of many young ladies in New Providence and Grand Bahama through the facilitation of expanded opportunities and personal development in the areas of beauty pageants and entertainment.

I recently listened to ZNS radio with a great deal of pride as her son Trevor paid tribute to his dear mom whom he loved deeply. Trevor expressed himself and portrayed his mom as a lady of class and substance who freely gave of her financial resources, time and talents and left an indelible footprint and enduring legacy on the community of Grand Bahama. Hilary imparted to her son all of the skills and knowledge she gained in the highly competitive, unforgiving, rough and tumble and male dominated industry of real estate. There is no question that the industry she helped to build and shape in return helped to build and shape her strength of character. It was the perfect business marriage as they both grew from strength to strength together.

Hilary was a giver and to use a fitting sports metaphor, Hilary left it all on the field of life, ensuring that her God given talents and moral attributes will live on in perpetuity through her dear son Trevor and the scores of people whose lives were touched by this giant of a woman.

We shall miss Hilary as the Master in His infinite wisdom has called her home.

Hilary was a product of Shirley Street and was called to be with her Maker at PMH located on Shirley Street. In a proverbial sense, Hilary’s life had come full circle and therefore was complete.

I wish to leave these words of consolation to the family and all assembled here today.

Death is a gift from heavens above,

Death is something you cannot run from,

Death is something you cannot regret,

Death is a wish, A wish you might soon to regret,

Death can scare you,

Death is not a game,

When your number is called you know death is calling for you,

There is no pain, No more regrets, No more broken hearts,

Someday soon we all will die in deaths arms.

May the soul my dear and lifelong friend Hilary Vernie Elizabeth Jones rest in peace and rise in glory.