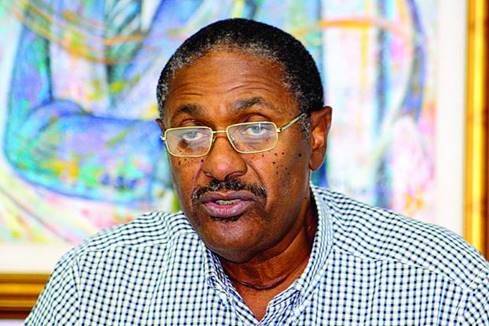 patient times;”>One thing you gotta say about Eileen Carron is that she is got a lotta balls, to be able to demand that the FNM has a convention and to really think that Hubert Minnis has to listen to her.  Who died and went to heaven and made her God?  She gets that from having a fawning presence of Hubert Ingraham during his Prime Ministership, giving her the impression that she is the Queen and can summon the powerful into her presence.  Mr. Ingraham is still at it with a report that on Thursday last he and his sidekick Frank Watson went to see her for God knows what.  But Mrs. Carron has met her match in Bradley Roberts, the PLP Chair.  Here was his first salvo.  We publish her reply and his reply afterward below:

The Editor of the Tribune Eileen Dupuch Carron demanded in her editorial on February 10th 2016 that Opposition Leader MP Dr. Hubert Minnis is a mystery “wrapped up in an enigma” and therefore demanded that the FNM Party must hold a Convention within the month to somehow settle the leadership of the party and place it on the right footing.

The Editor went to great pains to point out some of Minnis’ weaknesses as a leader.

To date, there has not been a response from Dr. Minnis to this vicious attack on him in this editorial.

One has to ask what would possess the Tribune’s editor to take such a politically biased position and more pointedly, who in the FNM inspired the editor to lambaste Minnis? Whose political interests is she representing?

She clearly does not like the return of Tennyson Wells and his racist charge against Montague Member of Parliament Richard Lightbourn.

Some have argued that Mrs. Carron is shamelessly using the Tribune to openly campaign for the return of Hubert Ingraham who abandoned the FNM at their weakest point shortly after their   loss at the polls in 2012. If the Tribune is seen as a substantial mouthpiece or lap dog for Hubert Minnis, then it loses credibility in its ability to objectively report the news and to be the honest broker and gatekeeper of truth the fourth estate demands of it.

On the other hand, one is also compelled to ask if Dr. Minnis is firmly in charge of the FNM? Is he convinced in his mind that “THE INGRAHAM ERA IS OVER” as he stated in 2012 during the heat of the North Abaco Bye Election. He must demonstrate that he is firmly in control of his organization and not one who is wishy washy and watching over his shoulders for a political threat that may or may not exist.

Dr. Minnis must put the likes of Carron in their places as this kind of vitriol and diatribe, if continued unabated, will cause the continued airing of the party’s dirty laundry in plain public view.