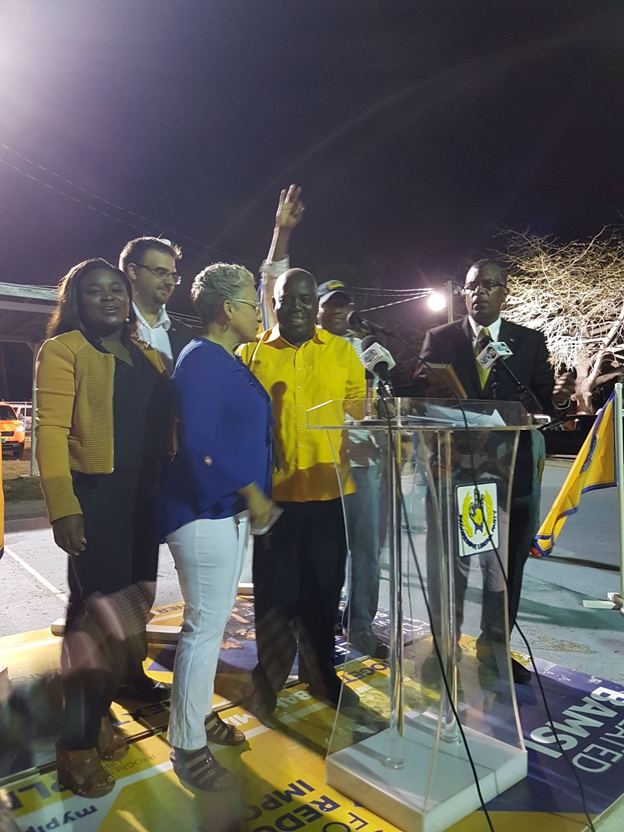 Today I stand in solidarity with my colleagues to protect the democratic rights for which our forefathers valiantly fought. I call on all right-thinking Bahamians to do likewise.

After the atrocities of today’s sitting of parliament I am reminded of the story of [Martin Niemöller 1892–1984] who was a prominent Protestant pastor who emerged as an outspoken public foe of Adolf Hitler and spent the last seven years of Nazi rule in concentration camps. He was quoted as saying:

“First they came for the Socialists, and I did not speak out—
Because I was not a Socialist.

Then they came for the Jews, and I did not speak out—
Because I was not a Jew.

Then they came for me—and there was no one left to speak for me.”

Today I speak up! This day marks a dark chapter in our democracy. We must speak up for and defend our sacred Democracy. Today in Parliament, the Speaker silenced the voice of the minority with the complicity of the entire contingent of the Free National Movement.

For hours, the speaker and FNM MPs went on a laughable tangent with pre-prepared scripts intended to demonize the honorable member for Englerston.

Having no clear agenda and set about on a course only to waste the people’s time, the FNM has displayed that it has no plan, no intention to govern, but only to posture and use our honored House for purely political gamesmanship.

I read a few minutes ago the Speaker’s remarks for the very first time. As a new member I find them not only troubling but frankly disgraceful. I denounce and condemn the unparliamentary personal innuendos contained in those remarks. No doubt more will be said on this matter.

I call for more civility and maturity in the Parliament as we were elected to do the people’s business and move our country forward.

Indeed, I am emboldened by the fundamental principle of parliamentary democracy that the Majority Rules, but the Minority must be heard.

The principles of fairness and justice are universal and should not be trampled upon simply to sooth the ego of any member including the Speaker, who himself was elected in the same process as other members.

Having all been suspended, we will decide, as the opposition parliamentary caucus, the way forward. Be assured though that this is not the end this is only the beginning.

But know that I remain resolute in my commitment to represent the people of the Exumas, Exuma Cays and Ragged Island no matter what roadblocks this administration seeks to place in the way.

PrevPreviousSENATORS WITHDRAW IN SYMPATHY
NextTHE WORK OF THE MISSIONS ABROADNext