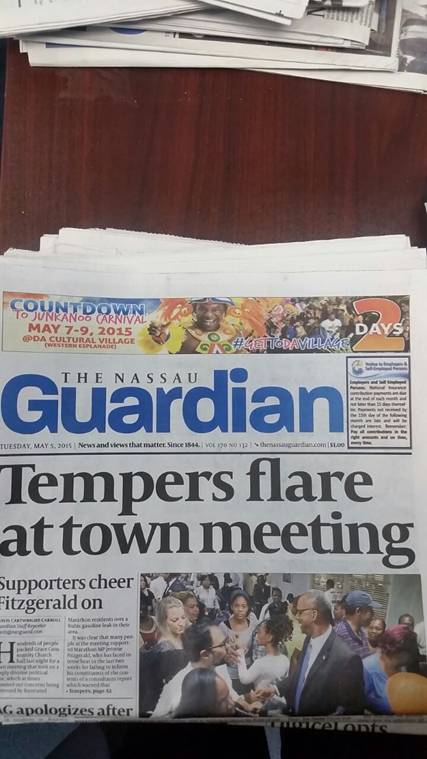 buy viagra cialis times;”>(The photo shows the scene at the Marathon Town Hall meeting held to discuss the Rubis oil spill and the headline in the press the next morning)

viagra sales clinic times;”>Way to go PLP.  We are so proud of the PLPs for finally standing up on their hind quarters and fighting back.  The programme of response and retaliation executed by Jerome Fitzgerald the MP for Marathon was brilliant.  It was great theatre.  The opponents were stunned into silence.

cialis sale times;”>PLPs showed up at a meeting on 4th May that was obviously designed by FNM sympathizers to embarrass the government and the PLP over the Rubis oil spill.  PLPs had had enough. They came by the busloads.  They filled the room. There was standing room only.  The organizers of the meeting invited everyone but the Member of Parliament Jerome Fitzgerald.  He came anyway and he brought his supporters.

Fred Smith the quizzical Queen’s Counsel was shown that not only one woman born a crazy child that night.  He was stunned into silence.

The so called Environmental Lawyer Romi Ferreira was said to have been embarrassed by his own wife who put the question about him that if he knew all the information he had about Rubis how come he did not say it to his own ex-wife and child who live in the area.  Interesting.

The PLPs lit up the web as well with their commentary, savaging the FNM.

Our point in all of this is that there are always two sides to the story.  The PLP seems never to want to tell their side of the story.  Jerome Fitzgerald shows us the way forward.  Not in there and not that night.  You were not going to come into his constituency and take over.  They got run.  They got silenced.  That is a good thing for our democracy and we congratulate him and the PLP for a job well done. Let’s do it again.