RBDF Fired Upon By Dominican Vessels 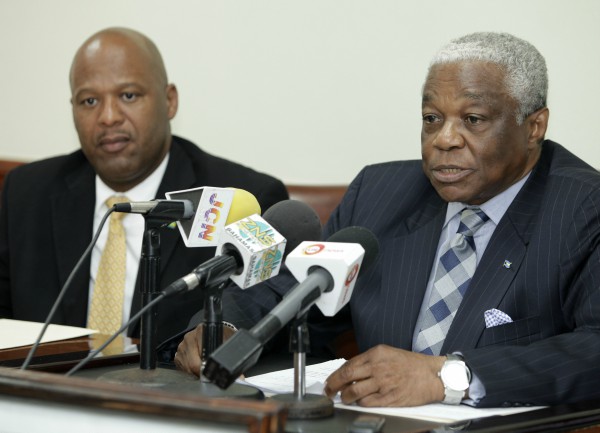 NASSAU, The Bahamas – The crew of Her Majesty’s Bahamian Ship (HMBS) Cascarilla was forced to return fire at a fishing vessel registered in the Dominican Republic at 8:00 p.m. Monday, June 13, 2016 after being fired upon (engaged) first by the crew of that vessel.

The incident took place in Bahamian waters in the area of the Great Bahama Bank. No Defence Force personnel were injured during the exchange. The crew of the Dominican fishing vessel was suspected of poaching in Bahamian waters.

National Security officials say the incident occurred after the crew of the HMBS Cascarilla launched its sea boat in an attempt to board the Dominican vessel after receiving information from local fishermen in the area and confirmation from the Defence Force’s air assets that the crew of the fishing vessel was illegally fishing in Bahamian waters. The crew onboard the HMBS Cascarilla returned that fire.

HMBS Cascarilla subsequently engaged the Dominican vessel in hot pursuit south of Cay Lobos near the southern limits of the Great Bahama Bank. The chase continued towards Cuban territorial waters. HMBS Cascarilla called off their pursuit once the vessel entered Cuban waters.

Minister of National Security, the Hon. Dr. Bernard J. Nottage said the Cuban Border Guard was later informed that the Dominican vessel had entered their waters. Dr. Nottage said Minister of Foreign Affairs, the Hon. Frederick Mitchell, who was in the Dominican Republic on Government business at the time of the incident, is meeting with officials there to address the matter.

“The obligations of the Royal Bahamas Defence Force are very demanding and are becoming more challenging as The Bahamas is increasingly threatened with illicit activities including the poaching of our marine resources,” Dr. Nottage said Tuesday.

“The Government’s commitment is to ensure that the Royal Bahamas Defence Force is equipped to effectively protect our territorial waters and meet The Bahamas’ obligations in the area of maritime safety and security.

“The Government of The Bahamas recognizes the critical role that security plays in the continued development of our nation. We have also clearly expressed our commitment to ensuring the safety and security of the people of this country.

“The Minister of Foreign Affairs is currently in the Dominican Republic on official business and has taken the matter up with the Government of the Dominican Republic. Additionally, I have directed an immediate and thorough investigation into this incident by law enforcement agencies,” Dr. Nottage added.

Reports indicate that the vessel that fired upon the HMBS Cascarilla, might have been accompanied by three other Dominican vessels. The crew of the HMBS Cascarilla was able to take two Dominican nationals found onboard two fishing skiffs in the Cay Lobos area into custody. She is continuing her patrols in the immediate area.

The HMBS Cascarilla was commissioned into duty in March of this year, purchased under the agreement contained in the “Sandy Bottom” Project, and has been conducting patrol missions around the Great Bahama Bank. She is a 98-foot long coastal patrol craft that was built with a shallow draft, which allows her to conduct missions in coastal waters and the shallow waters of The Bahamas.

The HMBS Durward Knowles, a Legend Class vessel that was also purchased under the “Sandy Bottom” Project, has joined the Cascarilla on patrol in the area.

The “Sandy Bottom Project” represents the single largest capital investment the Government of The Bahamas has ever made in the Royal Bahamas Defence Force since its inception in 1980. Total cost of the project is $232million and includes the acquisition of patrol craft, the dredging of harbours and the development of bases and port facilities.

The “Sandy Bottom” Project will facilitate the implementation of the Defence Force’s decentralization programme. This extensive programme includes the development of Defence Force bases at strategic locations in the northern, central and southern Bahamas, along with deployment of personnel, ships and aircraft.

This strategy is expected to enable the Defence Force to provide operational coverage of the Bahamas’ 100,000-square-mile maritime domain in the fight against illegal migration, poaching of marine resources, arms smuggling, illicit narcotics, human trafficking and potential terrorist-related activities.

“The decentralization strategy will also enhance the Defence Force’s overall efficiency in conducting search and rescue and disaster relief operations, in addition to maintaining marine navigational aids for the safety of lives at sea and ashore,” Captain Bethel said.