SARKIS IZMERLIAN SHOULD BE EXPELLED FROM THE BAHAMAS 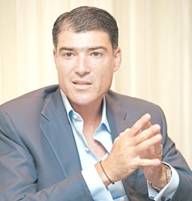 Once again we are forced to comment upon the actions of Sarkis Izmirlian who if people did not agree with the Prime Minister about a concern for Mr. Izmirlian’s mental health before, ampoule must now be convinced.

Over the past week, he refused to engage in negotiations in China where the Export Import Bank and the Government’s representatives were. He sent his front men instead. He stayed away.

What came out of it was that Mr. Izmirlian now wants the government to back by a sovereign guarantee his private debt of 175 million dollars in the bank.

The government has flat out refused.

The talks broke down.

Mr. Izmirlian then had his surrogates at the project in Nassau release a number of statements.  First he had Dioniso D’Aguilar, the laundry man and a member of the Bahamar board, on radio and TV in a plaintive voice, almost on the verge of tears say how Mr. Izmirlian’s back was up against the wall because of the government.

The Government decided to pay the salaries of the Bahamian employees.  They refused to pay the non-Bahamians.  Mr. Izmirlian had his agents issue a statement  attacking the government on that.

Times have really changed in this country.  That Vice President who wrote that letter would have been out of here the next day in the old days.

Then Mr. Izmirlian went to speak to religious leaders trying to get them to arrange a meeting with Prime Minister Perry Christie.  Amongst them Bishop Neil Ellis.  He was also threatening to go see the Catholic and Anglican Bishops.

He went on the radio with an offensive piece on Jeff Lloyd’s radio show in which he suggested that the people of The Bahamas will decide whether the government made the right decision.  He is now engaged in our politics.  On the radio, he attacked the Prime Minister saying that the Prime Minister was not acting in the best interests of The Bahamas.

On Friday 31st July when the Government moved to postpone the court hearing on the liquidation, Bahamar issued another statement accusing the government of not knowing what it was doing and deriding the whole process.

What does this profit Sarkis Izmirlian and his project?  It does not.  What is the end game?  There can be none except to launch pot shots.  At the end of the day, he does not have the capacity to take the government on and win.  He will lose.  We have said before, it cannot be a wise business strategy to take on the government, the unions, your neighbours, the lenders and the contractor.  How will that help bring this matter to a successful conclusion? ‘

The government itself has to consider why it is engaging in these negotiations because Mr. Izmirlian has proven to be a duplicitous and unreliable partner.  Why would you want him to continue to run this project knowing the content of his character?  The government must also know that the he has surrounded himself with FNM supporters and advisers.  He intends to put money behind the FNM to take the PLP out as he did in the bye-election that saw Ryan Pinder MP defeat Dr. Duane Sands of the FNM.  Yet the PLP government wants to continue to do business with this man.  If that’s the case, the PLP needs to have its head examined.

We say again Sarkis Izmirlian is done.  He is a turkey.  Stick a fork in him.

All of this is incompatible with his status as Permanent resident of The Bahamas.  It is now time for the authorities to act aggressively to bring this matter to ahead and write him a letter to show because why his permanent resident permit should not be revoked.

It is time for him to go and not a moment too soon.