SAVE THE BAYS AND THE GENERAL ELECTION 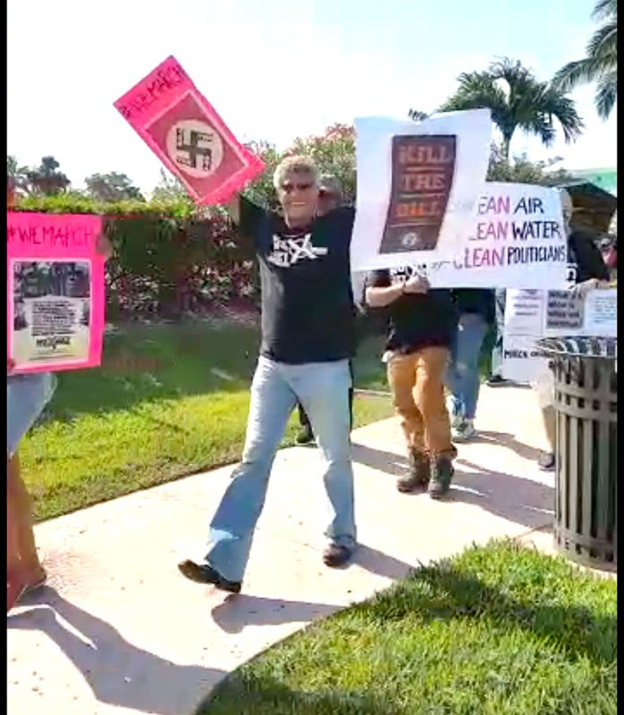 Fred Smith has been called a jackass and a clown.  His attitude is all that but that is too generous a set of words for someone whose actions are those of a natural fool and borders on being insane.  The picture we use today sees him with a poster and on it is the Nazi symbol, the swastika and he is in The Bahamas using that as a means of attack on The Bahamas government. There is no comparison between anything that happens in The Bahamas and the Nazis.

What is certain is that he on every occasion has engaged in a behaviour that is suspicious at best and treasonous at worst.  At every opportunity, he is in the press bashing not just the PLP but the Bahamian people, its institutions, its government.  One time after the next he sides with foreign interests against The Bahamas.  He is well funded and is using the money which the Parliament was told is supplied by the billionaire Louis Bacon to try to upset the PLP at the polls and replace it with a government which is compliant to his cockamamie mind and evil skills.

Imagine a man who claims he is a human rights activist, employing a  Nazi sign as a means of his defence, something which is clearly anti-Semitic.

It is clear that the FNM is an easy party to buy.  Three of the candidates for the FNM are connected to Mr. Smith and his evil designs on The Bahamas.   They are Adrian Gibson of Long Island, Romauld Ferreira of Marathon and Michael Pintard of Grand Bahama.  Money is being spent as if it’s going out of style and the question must be asked where the money is coming from.

The information that was sent to the Parliament says 8 million dollars passed through the account of Callanders and Co and Fred Smith Q C to engage in activities through a fake Environmental Organization called Save The Bays to destabilize The Bahamas government.    Another 15 million dollars was then on the way.  The PLP did nothing in response to it, seeing it merely as a fight between Fred Mitchell, Jerome Fitzgerald and Fred Smith.  Now the scope of the conspiracy which is afoot should be clear for all to see.

The PLP would be wise to target Michael Pintard and identify his source of funding.  He should be called out on it.  The Save The Bays accounts should be seized by the Financial Intelligence Unit and they should be investigated for laundering money through the accounts of the law firm Callanders and Co.  A formal complaint should be laid at the FIU for such an investigation.

This is not something to play around with.  This is so serious a challenge to the stability of this country that the law must intervene.  Even the question of who hears these cases before the judiciary ought to be carefully approached.  We simply do not know what is happening in this country at the moment.

The law firm Callenders and Co ought to wash their hands of Fred Smith immediately and cut their ties.

The latest information coming that moneys from the Bacon source through Fred Smith have found their way to this other nut case in politics Omar Archer, who is being paid to simply say the most outrageous and salacious things about PLP leaders in the country.  Again Callenders and Co have a responsibility to say  why these monies are being paid to Mr. Archer allegedly and if so, they should cease the payment and if not then cut their ties with Mr. Smith.

The word is that Mr. Smith is on stand-by anticipating that the FIU will seize his accounts and is waiting with a judicial review application in that case.  The Government of The Bahamas should not take this lightly.

We have gone as far as we can go.  The PLP , the FIU, the Police, Callanders and Co have one week left to get at this man Fred Smith and find out all the answers to these very dangerous reports.  If what is being said and alleged is true, this means our country is being sabotaged from within.  We must do all that we can do to stop it.  We must pray.