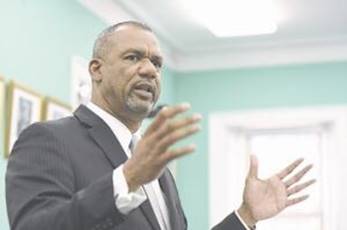 Jerome Fitzgerald MP in the House of Assembly 17th March.

The saying what a difference 24 hours makes in politics is apt for this occasion and in this column. Last week in a line, the PLP kicked ass and it was the FNM that for once was on the defensive.

It appears that an array of characters, gathered by Fred Smith QC, paid for by largesse from the trust established by Louis Bacon, the vexed billionaire in a silly fight with Peter Nygard, another billionaire, who says unfortunate and silly things out there in the geriatric ghetto named Lyford Cay on the western end of New Providence island, where the capital city Nassau sits.

The whole thing reads like a novel, acted out like a movie script and seems to prove the adage truth is stranger than fiction.

Each week, the Bahamian people are tired of the imploring of a group called Save The Bays. Jerome Fitzgerald, the Minister of Education, who made a comprehensive presentation in the House of Assembly on Thursday 17th March, said that Save The Bays masquerades as an environmental group but it is really a political organization.

He listed the names of a number of people including Michael Pintard, the FNM Chairman, Joe Darville, the other half of the ventriloquist and his dummy of Fred Smith QC, and he named Romi Ferreira, who is an FNM candidate and had led the fight against Mr. Fitzgerald in another front organization called Justice For Marathon.

Mr. Ferreira is a television presenter and even as he is named as a candidate for the FNM continues to appear on television interviewing people. He has no sense of shame. Mr. Fitzgerald said he wondered how the Justice for Marathon group was getting money to fund all of their activities. Now looks like and it may turn out that they were getting money from Save The Bays, who in turn was being funded by Louis Bacon’s Trust.

That set the cat amongst the pigeons and the FNM was scrambling. One by one, first Neko Grant, then Loretta Butler Turner, then Hubert Chipman all MPs, all disassociated themselves from it and said not to mix them up in it. We expect more people to make that point as well.

Michael Pintard, the FNM Chairman, has simply been stupid. In his mad quest for money, being a converted socialist, he has gone over the mark, and may have left himself open to the allegation that he openly coached a set of criminals to act to his detriment. He is said to have received some 100,000 dollars from the Save The Bays group. There are e mails which show that the Save The Bays Group were in intimate contact with him and Mr. Ferreira and one e mail even went to the Leader of the Opposition Dr Minnis.

So the question now is, when is confession time? The time is now? Hubert Minnis, the Leader of the Opposition, must say what he knows and when he knew it.

This cannot be swept under the carpet.

This is not a time for silence and obfuscation.

To quote Mr. Fitzgerald, we must follow the money trail. We must also follow the e mail trail. Wherever it leads, to quote Loretta Butler Turner: let the chips fall where they may.

As for the young PLPs, we told them last week in this column do not be shaken by untested affidavits in the public domain, always wait to hear the other side. We told the truth.