discount viagra sildenafil times;”>How from where we started, cialis sale ed
did we ever reach
this Christmas?

—Eleanor Of Aquitaine in the Lion In Winter 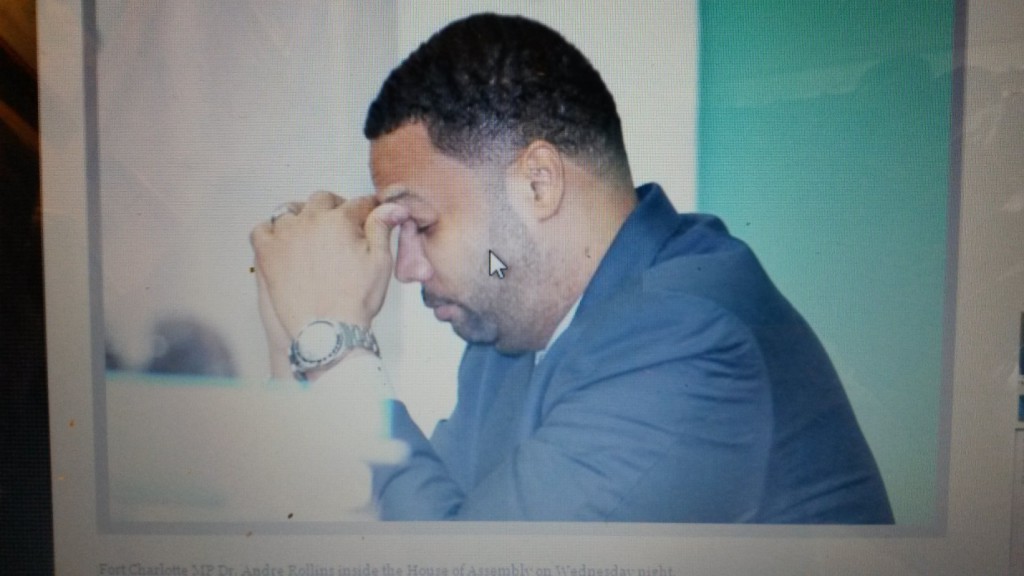 There is a photo which they used in the press with Andre Rollins shortly after he finished his speech in the Parliament at the end of which he resigned on Wednesday 17th June.  He looked exhausted.  He held his face in his hands.  The speech while full of chutzpah and hubris left him absolutely exhausted.  He was done and the expression on his face looked like: “what the hell have I done?”  There is a scene in the movie Ragtime which this reminds you of.  Just before the protagonist in the story meets his end, he said “Lord why did you put such a rage in me?”

And in Andre Rollins case, rage indeed and Lord who can figure?  This is a fellow who was given a seat on a platter.  Didn’t have to work for it.  No struggle, just grabbed up from the pile and placed in a seat. He met a machinery in place.  The PLPs were happy to work for him.  He won the seat. All he had to do was keep it.  He got a plum job as Gaming Board Chairman: no work required there; the staff would do the work.  All he had to do is keep the job.  Yet within three short years, after professing to be part of the future of The Bahamas, Mr. Rollins by his own hand implodes his political career and ends up from a safe position on the inside right plumb on the outside. Only Rodney Moncur, the perennial iconoclast could have constructed a greater collapse of political sense.

Who can figure?  And Jesus, maybe you can tell us why you put such a  rage in him?

The matter of his resignation had been coming a long time.  Greg Moss, the MP for Grand Bahama, beat him to the punch the week before by announcing he was gone.  He too had been gone for a long time and his resignation simply capped what we had all suspected. Mr. Rollins ducked speaking in the House all the week long as the tortuous debate on the budget wound to its slow and grinding close.  He claimed that he had to see a doctor.  Strange said the PLP in response that: he was in the press every day with much to say while he had to see the doctor. He defied the party whip again. He was told he would speak in a slot allotted for him that Wednesday morning.  He decided to speak when he felt like it.  When the government tried to close the debate on Wednesday 17th June, he had missed the spot allocated for him in the morning.  The Speaker Kendal Major overruled the government including most pointedly the Prime Minister and refused to allow the move for closure of the debate and allowed Mr. Rollins to speak.  The speech was a tour de force of what is wrong with the PLP and by extension The Bahamas. It was simply incredible, a mix of half-truths, faux economics, idle protestations, yes everything and the kitchen sink.  It wore thin at the end.

The final moments for him in the PLP came when he said just before sitting down and while being allowed to run over time, that he had not come to the house intending to resign but after he was treated by the PLP where they wanted to stop him from speaking ( not true of course) he had to leave.  How do you allow yourself as the Leader of the Opposition would say to be “goosied” into resigning when you never intended to do it?  So the PLP that had wanted him out but whose leaders were stopping the faithful from pushing him out got their wish by his own hand.  He said parting is such sweet sorrow—you know the lines from Shakespeare and then said he resigned.  The PLPs clapped.

On the PLP sites on What’s App and on Facebook and Twitter, the cry went out: where the party at.

The Ft. Charlotte branch had a Junkanoo celebration.

The PLP feels it is in a stronger position now than before.

We say do not accept that as gospel. In one sense the party certainly is.  The PLP is united and strong and undivided. Nothing Mr. Rollins or Mr. Moss said has shaken the party or its resolve.

While the logic of it feels all fine now, the fact is we must also listen to what he said because some of it resonates to too many.  The damage done by it along with the departure of Greg Moss and the possible departure of Renward Wells means that the coalition of 2012 has broken down.  What replaces it in the next general election campaign?  We must be about that business. Time is short.

So Mr. Rollins has gone. It is a sad end to a political career that could have been a happy one. But politics is a strange thing. And who knows why or when or where?  The PLP must press on to victory and while shedding a tear for the loss of what could have been a good member, we rejoice that those who are left behind are more than able to carry on.