SO WHAT LESSONS DOES THE PLP LEARN FROM JA? 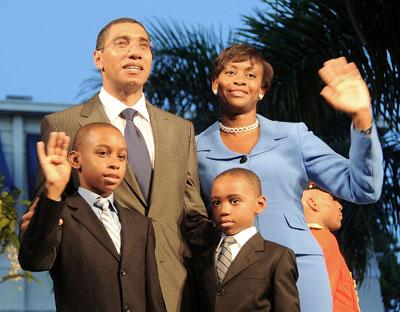 ailment times;”>The new Prime Minister of Jamaica Andrew Holeness with his wife and children.  She too is an MP and according to her husband qualified to be in the Cabinet.

W. and his wife are in a fix. They need money.  Both work. He has just gotten a new prosthetic leg, price 49,000 dollars.  His wife worked in Nassau for a public corporation and is owed monies from four years ago when she was sent to do training in the capital.  Despite their best efforts the money has not come.  Says he: “ My people are in power, and I don’t expect to get treated this way.”

C’s roof needs to be fixed.  Her floor is nonexistent. She and her children live in the building nonetheless.  There is no toilet.  Experts and inspectors and officials have come and looked.  They promised it would be fixed.  It’s been six months now.  Rain storms have come and gone. The wind howls.  The centipedes come.  Experts have come again and gone but the roof and the floor are not fixed.  She says: “ I have never voted anything other than PLP.”

G has a proposal for crown land down in Exuma.  He heard a message of empowerment during the campaign of 2012.  He took the bait.  Helped to  support the cause because he knew the Black government was in power and would empower.   His proposal still awaits action.  It’s been four years.

P was put on a list of potential hires for a government department.  It’s been three years.  All the papers are in. No phone call.  No response.  Told it’s the budget.  The budget came and went in July.  Nothing.

J sits in Abaco and broods.  He needs an acre and half to put up a new shopping plaza and expand his business.  The crown owns the land.  It’s been two years since he applied and nothing.  He too believed in the message of empowerment.

L and B In Inagua want to go into business. They put in proposals.  In this case they need land from the Government.  They got it.  They put their proposal to the bank.  They want to be a franchisee, to sell the products of a major vendor. They were turned down by the franchiser.  But now the franchiser is about to go directly into business it appears with the same business model. The franchiser has ties to their party.  They too believe in empowerment.

M used to be on the Bodie show rowing for the PLP.  What she wanted was this problem fixed: her daughter was hired by the government , got a letter of appointment just as the general election of 2007 took place.  As soon as the FNM came to power in 2007, they ignored the letter. She was sure that the PLP would fix the problem when they came back to power in 2012.  It’s been four years now, nothing.  Her voice is silent and missing from the radio. Hasn’t been to a branch meeting in months.

B in  Fox Hill was hard done by one of the public corporations during the time that Hubert Ingraham was in office.  He was a part of the Union. The Prime Minister then thought he was anti FNM, so the Corporation refused to pay the overtime or extra pay that he requested, required and was due by contract.  When the PLP came to power, he was PLP and he knew like M, that  with the new party, it would get straight.  That was four years ago, the meetings are still taking place.

People are shocked at the result in Jamaica,  Portia Simpson Miller called an election one year before it was due, hoping to catch her opponent Andrew Holeness off guard.  She badly miscalculated.  When the campaign was launched, she said she was waiting for God to tell her when to call it. If 25 February was the date “ God ” told her, then she didn’t hear right.  She lost 33 to 30.   Less than 400 votes separated her from victory again.  Only 47.5 per cent of the electorate in Jamaica turned out to vote.

A young Bahamian doctor speaking to his friends in Jamaica said that his Jamaican friends did not vote because they did not care, it mattered not who ran the country.

Like Mr. Holeness, the FNM has already started its campaign.  We can be fooled and distracted by the nonsense that Candia Dames and Eileen Carron are printing in their respective newspapers about fights in the FNM, and perhaps we ought to encourage them to continue to fight.

We start in a deficit. So what is the answer, when all the good things have done, all the heavy lifting, all the state craft, all the  high debates, legal reform , constitutional amendments, all is said and done. It’s still down to : what have you done for me lately?

In all of our recent elections something like less than 500 votes separated the PLP or the FNM from victory or defeat. In other  words, 400 people voting the other way can make a national difference.

There is an ad on TV  for Delta Airlines. The scene is a  company  selling copiers and he calls the staff together to say that his customers are complaining they don’t know  company anymore.  So he says to the staff;” I’ve bought tickets for everyone to go back to the markets and visit our customers so we can get to know them and hear how we can serve. And I’ve bought one for myself to go see that old friend.”

So every PLP has their marching orders.  Look at the paragraphs up above and the examples of the opportunities to fix small problems, not stratospheric ones.  Just small ones.  That will do. That is the lesson of Jamaica.