THE AIRPORT IS A MESS: NO VISION 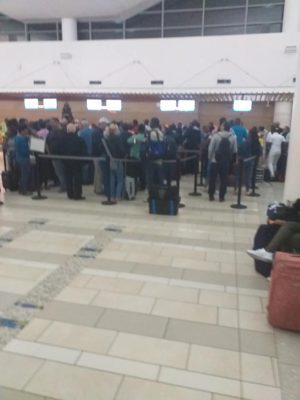 The pilot on the outbound American Airlines flight apologized to the passengers. The delay on the runway he said was due to the fact there the air traffic control in Nassau was overwhelmed by the amount of traffic that they have to handle at this time of year. That comment came on Boxing Day 26th December at about 4 p.m.

The days which followed were a nightmare for the Lynden Pindling Airport in Nassau.  While the Minister of Tourism Dionisio D’Aguilar was busy patting himself on the back for being the Tourism Minister of the Year, claiming other people’s work, he was not paying attention to the longer term and more fundamental problems of our tourism sector.  The basic infrastructure is sagging under the weight of all the traffic which now wants to come to The Bahamas.

For the past two years if not more Senator Fred Mitchell has been saying that LPIA is inadequate.  The airport is simply too small for the traffic and the ambitions which we have as a nation in the tourism business.  The runway and the tarmacs and taxiways it turns out are problems which need to be fixed pronto. We also need to be thinking about the new terminal for the airport.

That’s what countries do.  They always plan expansion. Unfortunately, we have these Bozos who now run the country and all they can do is talk about cutting back at a time when we should be talking about expansion and planning expansion.

The first thing the press and their FNM bosses did was to blame the matter on industrial action. The President of the Air Traffic Controllers Union Hinsey McKenzie says that is not true.  He said that they have meetings scheduled with the Government for mid-January. They have been working without a contract and the Government cannot seem to get its ducks in a row but there is no industrial action.

The fact is that during this period the LPIA has handled some 1200 movements per day.  Compare this to Jamaica that handles 250 per day.  The Bahamas handles more than Jamaica, Trinidad and Barbados combined.

The fact is the alternative runway the 9500 feet one is on a day to day basis because it needs to be repaired.  It has cracks in it.  The main runway 32 is overused and every time the weather changes, there is need to have the long separations.  Thus, when the traffic increases near the end of the year, we have the long lines and long waits.  Several flights by Bahamasair and international airlines had to be cancelled and delays are numerous.

So, it’s over to the FNM to fix this problem. But the PLP has to put it on its list, if it’s not fixed, to fix it when they return to office.  Put people to work.