The Americans Make Fun OF Their President 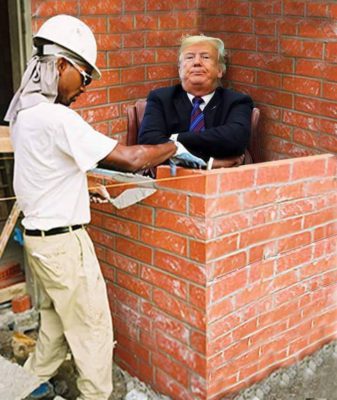 For nearly 70 years, the establishment in the United States built up a construct based on institutions which were to look out for the common good of the world.  Their constitution, they boasted, prevented the kind of autocracy and tyranny that had plagued the old empires of Europe and Asia.  In one election in 2016, however, all of that went out of the window.  Last week we reported that it appears that there is a criminal enterprise now in charge of the United States. They appear not to able to get rid of it.  Now we go further, and it appears that the people of the United States are themselves apoplectic about what to do about a loony enterprise which seems to be at the centre of their Government.  The latest is their President who agreed to a resolution which would continue to fund the Government; then some right wing nuts who support him on Fox News said he was a coward for not insisting on the wall to prevent the Mexicans from coming in and he reversed course. Senators had to come running back to re-vote.  The House obliged to his will. He blames the Democrats, his opponents; even though when he threatened the shutdown, he said he would own it.  The memes have been interesting, and we show one them in this column, The caption was that the Mexicans have agreed to pay for the wall.