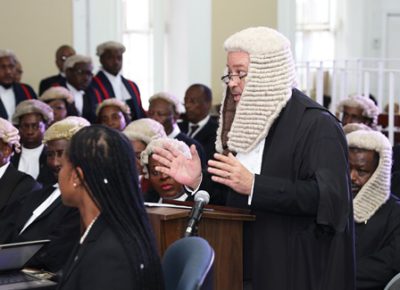 One cannot help but think that, now that Carl Bethel Q C, the Attorney General, has intervened publicly in the case of Ashe vs Shane Gibson or more particularly the Crown vs Shane Gibson.

You all know the story.  The FNM in pursuit of victor’s justice brought three cases against former PLP Members of Parliament.  Shane Gibson was one of them and the star witness, who was allegedly complicit in paying Shane Gibson money which the Crown said was originally extorted, is Jonathan Ashe.  Mr. Ashe, it turns out is still on the Government payroll. The invoices which have been doing the rounds on social media show that all the payments date from post March 2018.  This means that the pattern that has been established in the case against Frank Smith obtains.

On the face of it, it appears that the Government is sweetening the pot so that the star witnesses can sing like canaries whatever preordained story the Crown wants them to sing.

Shane Gibson has gone to court to get the whole thing set aside.  Unfortunately for them the Judge who has the case is not the best.  She is the Judge who sought to stop Parliament from discussing emails about Fred Smith and Save The Bays who were accused of seeking to subvert the PLP while in office.  She should in fact be challenged and removed but they have decided to proceed.

Carl Bethel told the press outside the Cabinet on Tuesday 25 September that there was nothing unusual about the payments to Mr. Ashe.  He said they were for previous invoices for work already owed by the Ministry of Finance. People looked at the invoices and saw 2018 and VAT applied at 12.5 per cent and wondered how if they were pre-existing contracts before VAT rose how could that be.

Mr. Bethel then went on to describe Mr. Ashe as a whistleblower.

Just as we are uploading, we have received news that the Court was upset about Mr. Bethel’s remarks and wanted to bring him but got weak kneed because he was a Cabinet minister and so sought to make a more general order described by the Judge Indra Charles, who previously sought by order to gag the Parliament, to no now gag the press so that they cannot talk or report on the Shane Gibson case.

She should be removed as a Judge from The Bahamas and sent packing.  At the very least this matter should be sent to the Court of Appeal and set aside.  It is wrong in law for a this and different reasons.

But the fault for all of this is the dear Attorney General whose midday confession set the cat amongst the pigeons and caused the courts to lose their way.

We hope that the press and the political parties get together and challenge this stupid order by this Judge.