THE BI POLAR MAKE UP OF THE FNM 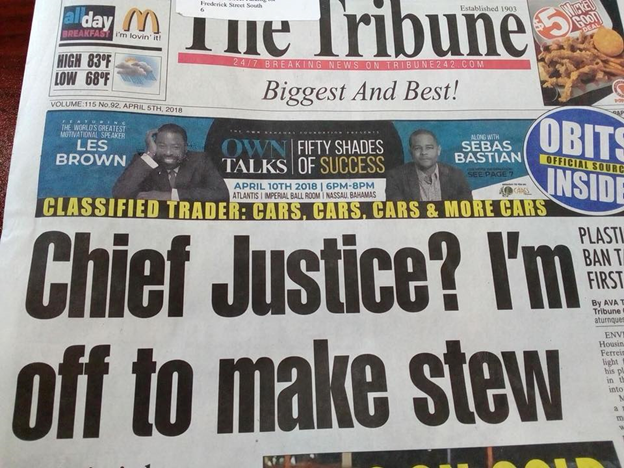 Like the pageWe support Frederick Mcalpine. FNM MP in GB

Posted by Bahamians Against Corruption on Thursday, April 5, 2018

The FNM is in complete disarray; that much is clear. You cannot figure out what they are going to do next or for that matter what is going to come out of their mouths. Leading the pack of lost souls is of course the Prime Minister Hubert Minnis. Before you get to his vacuous mind, bereft of ideas, you have to get past his grammar. Who can remember when he talked about the quagmire of a web? People said then: “say what?” Today they can only shake their heads.

The latest was when confronted about the failure to appoint a substantive Chief Justice to the job, his answer was that he was going home to finish cooking his stewed fish. This is against the backdrop of the a Minister of State Ellsworth Johnson in the Attorney General’s office telling him that he saw no reason why a Chief Justice should not now be appointed to the job.

It is clear that that remark flew in the face of Cabinet conventions and he should have followed up with a resignation letter. Instead, Mr. Johnson who at first stuck by his guns, a few days later, grovelingly stepped back from the breach and said that he had apologised to the Prime Minister for what he had said.

Someone ought to tell the Parliamentary Secretary Vaughn Miller that he needs to to do the same thing since he also launched a broadside against the government of which he is a part, during the most recent midyear budget debate.

Then there is the case of Rev Frederick MacAlpine, the MP for Marco City. This is the man who said that the government is off course and losing credibility because of the decision to approve the Oban Energy Deal in Grand Bahama. The video clip which we enclose in this column says it all. If you didn’t know, you would swear that this fellow is a PLP MP.

So the point we make here is that 11 months into the Government, the FNM has nothing to show for being in government. They have a track record of locking up their opponents and blaming the PLP for everything under the sun. They are still doing it. Everything else which they have touched has turned to mud.

The Minster of Health is busy trying to rob poor people of the food which they eat by increasing the taxes on the food in the name of forcing people to eat healthy foods. He cannot keep the medicine stocks in the hospital and he is unable to put patients in beds because he has run out of space. People are dying because of it and the negligence of the Government.

The central government as in the Cabinet is one thing but the ones we want to speak about today are the MPs who have been speaking out: Messrs. Miller, Johnson and MacAlpine. They must know that they cannot be fish and fowl. You have to be one or the other. Right now they think that they can straddle the fence. But they cannot. It is only a matter of time if they do not get in line that they will be ostracised and pushed out into the deep and left on their own. That is that particular graveyard that claimed Andre Rollins and Greg Moss.

This is what we call the bi-polar nature of the FNM. Like Leslie Miller MP under the PLP who was a good MP and believed that by being frank with his constituents that might save him from the wave that came and brushed he and his colleagues away, no amount of speaking up will save Messrs Johnson, MacAlpine and Miller from the damnation which is coming.

Only one way to save yourself, hop off that boat and get on board the SS PLP.