THE COMMISSIONING OF THE ROLLY GRAY 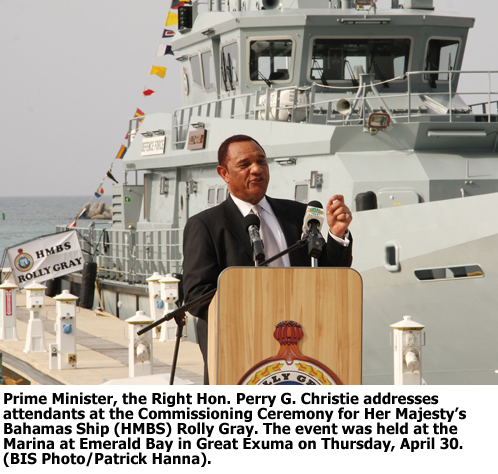 GREAT EXUMA, The Bahamas – The fourth of nine patrol vessels has been named after legendary Bahamian sailor, Mr. Rolly Bertram Gray. Her Majesty’s Bahamian Ship, Rolly Gray was commissioned during an official ceremony held at the Marina at Emerald Bay in Exuma on Thursday, April 30.

Prime Minister the Rt. Hon. Perry G. Christie led a delegation of Cabinet Ministers and Senior Government officials to attend the ceremony. Bahamians and a number of international guests were present despite the overcast weather conditions. Prime Minister Christie said that he was honoured to participate in the event. He said that Mr. Gray was a great Bahamian who contributed much to The Bahamas.

“I am satisfied that all Bahamians alike, will unquestionably agree, that Rolly Gray is deserving of this great honour,” said Mr. Christie. “This is a man who dedicated his life to promoting his country and his craft. He deserves this honour, posthumously, from a grateful nation.” 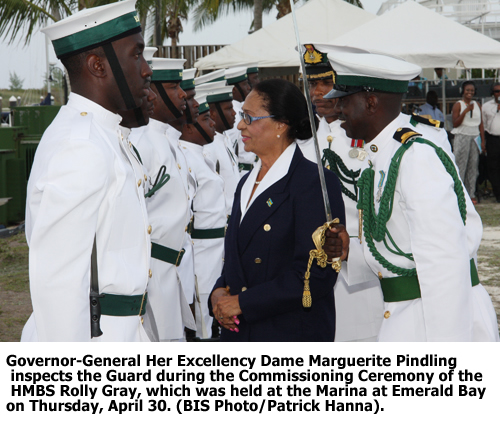 For decades, Captain Gray’s name has been synonymous with regatta competitions. He was born on August 22, l922 to Richard Gray of Staniel Cay and Blanche Smith-Gray of Farmer’s Cay. In 1937, at the age of 15, Captain Gray went to sea for the first time with his uncle on an 18-foot boat. One year later, he went out on the 36-foot Ragged Island sloop “The Return.” Then at the age of 18, he became the captain of the 25-foot “Dolly.” Gradually, Captain Gray manned larger boats and more powerful boats, winning the first Out Island Regatta in the ‘A’ and ‘C’ divisions (which later became the National Family Island Regatta). 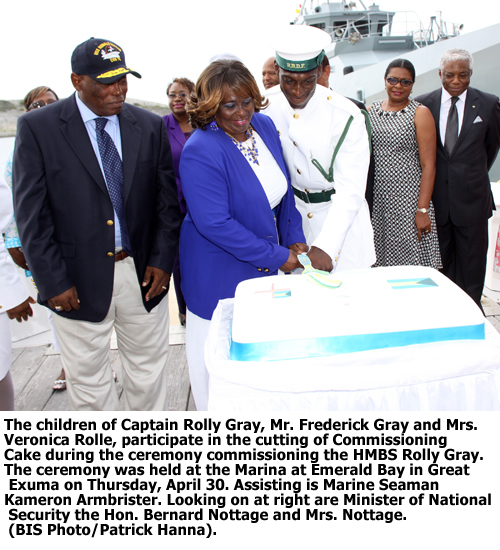 National Regatta Hall of Fame, All-Exuma Association, Burn’s House, Long Island Sailing Club and the Long Island Association, among others. In 2007, Captain Gray was an inductee on the ‘Wall of Fame’ at the Lynden Pindling International Airport by the Ministry of Youth, Sports and Culture. Captain Gray was married to Maggie nee Bodie of Black Point, Exuma and the couple had eight children: Veronica, Barbara, Penelope, Yvonne, Ruel, Tony, Freddie and Sandy. He died on February 17, 2008.

The HMBS Rolly Gray is the fourth in the Damen Stan Patrol 4207 vessels. The other three ships that have already been commissioned include: HMBS Arthur Hanna, HMBS Durward Knowles and HMBS Leon Smith.

The Commanding Officer of the HMBS Rolly Gray will be Mr. Granville Adderley, Acting Lieutenant Commander of the Royal Bahamas Defence Force.