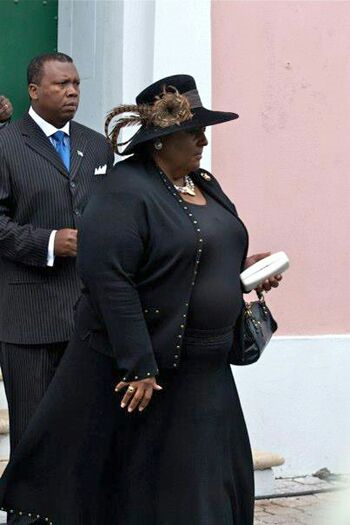 They that have done this deed are honourable.

What private griefs they have, alas, I know not,

That made them do it. They are wise and honourable,

And will, no doubt, with reasons answer you.

—- Mark Antony at the funeral of Julius Caesar

“Heaven has no rage like love to hatred turned, nor hell a fury like a woman scorned,
— The Mourning Bride by William Cogreve

It is probably sexist to say so but the story that has been doing the rounds in the face of the inexplicable action led by Loretta Butler Turner FNM MP for Long Island that sometimes a woman will burn the house that she and her children live in, burn it down by her own hand, then sit outside crying that she has nowhere to live.

What happened last week, was the action of a dragon lady.  Hubert Minnis, the Leader of the FNM and up to Wednesday 7 December, the holder of the constitutional post of Leader of the Opposition, had no idea what a nightmare his daylight work would have been.  He was blindsided as the Speaker of the House of Assembly Kendal Major read into the record a communication from seven FNM MPs that they no longer had confidence in Dr. Hubert Minnis as their leader and that they were choosing Loretta Butler Turner whom he had defeated in two leadership elections this year.  With that Dr. Minnis was out and Loretta Butler Turner was in.  She is to be given her instrument of appointment shortly after this column uploads.  The ceremony will take place at Government House with Dame Marguerite Pindling residing.

The real question every PLP was asking was: what is the end game?  In the short term it is clear that this is the second gift that the PLP has been given this year. Andre Rollins the MP who had been casuing trouble all term long is part of this trouble as well gave clue when he told the press he thought that Dr. Minnis should have resigned. How lost the seven are if they thought that was going to happen. With the fortunes of the PLP down in the dumps and the assaults on its leader going at it every day, some good news was welcomed by the PLP.  That did not stop the wonderment at what was wrought in the Advent season by the FNM.

Those PLPs who were around in 1977 remembered quite clearly the run up to that election when there were pitch battles in the press and at least one time in the streets over who was going to control the FNM. There is a cleavage or fault line in the FNM along ethnic, class and ideological lines which dates back to their amalgamation out of necessity way back in 1972.

The rump of the racist Bay Street Boys party the United Bahamian Party, joined up with those who broke away from Sir Lynden Pindling’s PLP to try and make a go of it as the Opposition party.  They were broadly known as the UBP faction and the Cecil Wallace Whitfield faction.

In the 1977 iteration, they went to war with one another.  They went to the general election with Cecil Wallace Whitfield leading one group as FNM and Henry Bostwick leading another group as Bahamian Democratic Party (BDP). Sir Lynden Pindling, having passed the Public Disclosure Act, and cast off all the MPs who had been involved in some scandal or other political dispute with him: Arlington Butler, Lionel Davis, Earl Thompson, Carlton Francis, Ed Moxey, Franklin Wilson, went on to win the 1977 general election hands down.  You would have thought that this crew would have learned their lessons.

The MPs could not have thought that they could start a political party and within the five months left to a general election date. mount a credible effort at being the government of The Bahamas.  What they seemed to have in mind is that when they forced Dr. Minnis out, he and the FNM machinery would fall away in their favour.  They would then grab the reins and then move on like nothing happened.  They are lost in space.

Hubert Minnis did what Pindling did to those who broke away from the PLP when they disagreed with the Black Tuesday incident in 1965.  The PLP decided to boycott the House after that incident on 27 April 1965 but the PLP members who had not been told about it Orville Turnquest, Paul Adderley and Spurgeon Bethel all decided to defy the boycott and return to the House.  They were then suspended by the PLP and subsequently left the party and fought the general election under the banner of the National Democratic Party (NDP).    The PLP went on to win the general election.

So Dr. Minnis is now at that same stage, although Sir Lynden never lost his leadersip.  However, the thinking is that the FNM has the party, the name, the building, the machinery nationally.  They simply stay put against an unpopular government and Bob’s your uncle.

Not so fast says the PLP.  The immediate impact is to give the impression of a weak and feckless Minnis, without the leadership skills  to be able to spot someone right next to his bosom who had the capacity to kill him and like Brutus stabbed him in the back.  Secondly, it is clear that the Opposition is divided.  Even after history was pointed out to each side, the dragon lady continued with another press release promising a programme of radical opposition work and leading to removal of the PLP. They are all pipe dreaming, even in the age of Trump.

Now for the PLP.  Stop counting the chickens before they hatch.  The underlying problems are still there.  If you go out into the streets and survey the the public, the new voters have paid absolutely no attention to the drama that unfolded last week, don’t care and didn’t take any notice of it.  There are still no jobs.  Still the fatigue factor of inertia by an organization that seems incapable of getting past all this deliberation and just doing what is necessary to be done and be done with it.

The hurricane bonus has been blown.  Now we have another gift.  This might be the Hail Mary pass that we were asking for, praying for two weeks ago.  Let’s not blow this opportunity.

PrevPreviousTHE CABINET AT LUNCH WITH THE GOVERNOR GENERAL
NextBREAKING NEWS: THE DEED IS DONE LORETTA IS OPPOSITION LEADERNext