THE FNM DOES THE DIRTY DEED IN GRAND BAHAMA 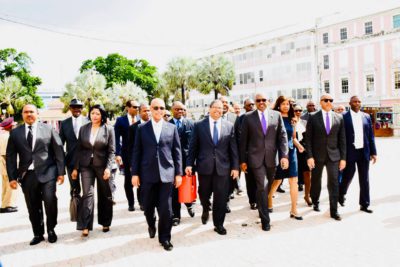 The FNM Government is as crooked as a corkscrew.  They are masters of deceit.  This has become the mantra of the PLP and the wider public since these folks came to office in 2017.  They came to office on lies: saying one thing and then doing another.

Nowhere is this starker in reality than with the tourism product.  You can hardly believe your ears and eyes as the Minister of Tourism, the lapdog of Sarkis Ismerlian, the failed developer of the Bahamar project, is busy yelping about how great the tourism figures are.  He conveniently forgets of course that they would not have been great if the FNM had had their way and the Bahamar project had failed. They did their best to make it fail.

The fact that the tourism figures are what they are is because of the PLP’s work on Bahamar.  No additional rooms, Nassau would have been a ghost town dependent on the Atlantis Resort that seems to be shrinking every day of the week.

So that causes us to turn to Grand Bahama.  This crew came to office saying that they would not go into the hotel business.  One year and fifteen months later, they are in the hotel business.  Then in the equivalent of saying they tried marijuana but didn’t inhale, they now say they will buy the hotel but they won’t renovate it.  They will simply sell it.

So get this now.  They are going to spend 65 million of the Bahamian people’s money into a project that is not a going concern.  They are going to take on the liabilities of the employees including severance.  They are not going to fix it but sell it.  Mr. Motor Mouth, the Minister of Tourism, says that even if the Government has to take a loss on it, they will do it because its worth it. That’s FNM economics for you.

But wait that’s not all. At first, they said they would not renovate it at all. Then they said they might said Michael Scott who is head of the special purpose vehicle that bought the hotel. He says well no not quite.  He says they have buyers and they think they will flip the property in six months.  Or is that a year.  You can hardly tell.  Like conch salad this is mixed up crew. They have no idea what they are doing. Making it up as they go along.

In the meantime, the former owners of the hotel Hutchinson have dispensed with it. They told the employees last week the hotel belongs to the government and look to them for your pay. Hutchinson says the hotel will be a going concern so no severance.  The employees have said in response: “the devil is a liar; we want our severance.” What you do after that is your business. We don’t blame them.

So that’s where we are?

This deal is so inexplicable.  Given what we see unfolding with BPL and the corruption surrounding that, what is to make us believe that this is any better.  Sixty-five million is a lot of cash for these broke ass people who came to office without two coppers to rub together. So, you can be assured that there is some crookedness underlying this.  Who are the lawyers? Who are the engineers? Who are the surveyors?  Who was the broker? Something is rotten in Denmark and it ain’t cheese.

We said it.  You read it here. The FNM Government is a s crooked a corkscrew.

PrevPreviousP.M. ON MURDER OF BLATCH GOOD AT RAGE BUT NOTHING ELSE
NextFAREWELL INSPECTOR CARLIS BLATCHNext