THE FNM IN MORE TURMOIL 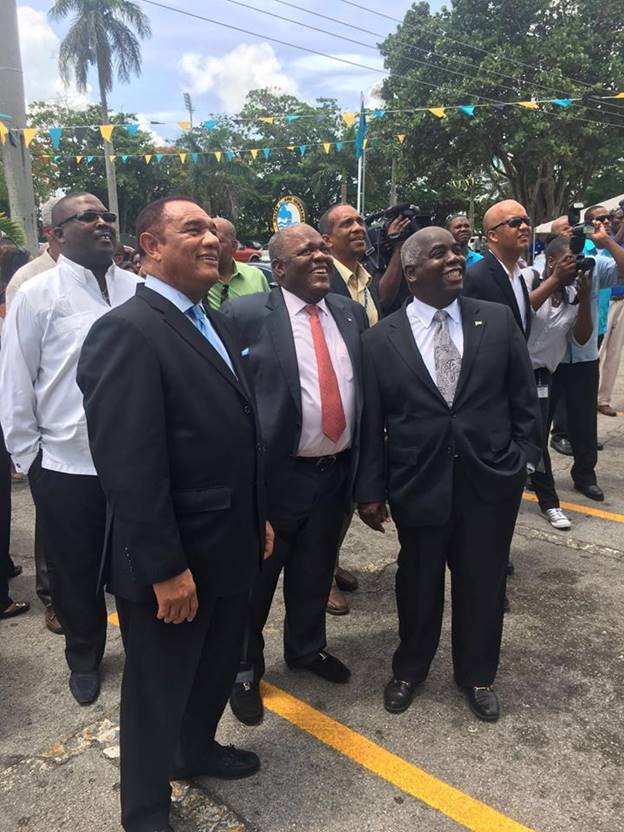 Shall we say that we look to the hills from whence cometh our help. Or are they gazing into the future, a future in politics on which the country is hyped and keyed up to see who will be our king? The three contenders in the race are there Prime Minister Perry Christie and former Prime Minister Hubert Ingraham. One newcomer, Philip Davis, the Deputy Prime Minister. The old law firm is back together: Christie, Ingraham, Davis and Co. Mr. Davis is new to the fight. The others are been there done that folk. Mr. Ingraham has since told The Nassau Guardian that he is retired. Well where have we heard that before?

The occasion was the naming on 22 July of the building for Water and Sewerage after George Moss, its former Managing Director. The Prime Minister Perry Christie took the time to address in an oblique way a small crisis brewing within his own party over the fact that he appeared to say that he was staying on to run for office because he was asked by younger PLPs to do so and that he needed to stay on as a stabilizing force.’’ His Deputy Prime Minister Philip Davis said he had no idea what Mr Christie was talking about because the party had after all survived losing its founding Prime Minister Sir Lynden Pindling. Former MPs George Smith and Philip Galanis were much less polite and the Speaker of the House Kendal Major said well if someone did ask him to stay on, it wasn’t him and he certainly wouldn’t have said it and he has strong views on the subject and he didn’t wish to discuss it in public.

This is the first public breach in the silence imposed after last year’s round of press speculations that the Deputy Prime Minister Philip Davis was going to oppose the Prime Minister at the convention which never took place.

What is happening in the PLP though is small potatoes compared to the meltdown in the FNM. The recriminations continue, with Loretta Butler Turner saying that she will be dumped by Dr. Minnis if she loses in the convention fight against him. The press went to speak to her constituents and some of them said they would be happy to be rid of her. Tennyson Wells, who is the mouthpiece for Dr. Hubert Minnis, Leader of the FNM, said he would campaign against her if she got the nomination.

Then up in Freeport, they are saying that Hubert Ingraham, the former PM, is in fact ordering his T shirts for the run which he is expected to make at the last minute for the Leadership of the FNM when the convention time nears. They are saying that this is the real reason why Loretta Butler Turner was not anteing up the 100,000 dollars she promised to help pay for the convention because she feared that she would be fattening the foul for a snake in that Mr Ingraham would simply come in at the last minute and nominate and that would be that and she would have spent her money in vain.

The only thing more comical than this show in Nassau was the show on CNN put on by the hapless and stupid Donald Trump who is running for President of the United States.

How will they (the FNM) get over this stuff; the names they called each other; the things they said about their party and the individuals in it, in time for an election will be a minor miracle? In the meantime, it appears that a small head of steam has built up in the PLP over leadership as well.