THE FNM MPS DIG THEIR GRAVES 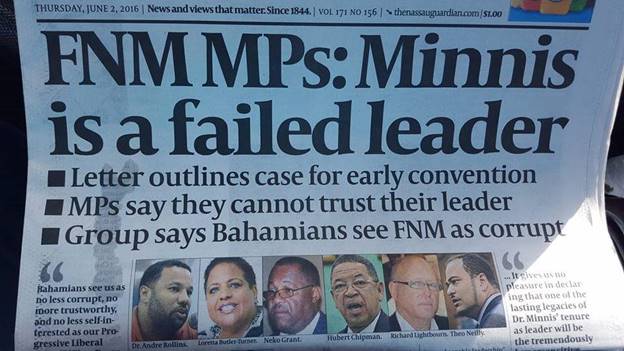 We have read with great interest the letter by the FNM MPs, the six that you see in the picture that was sent to their Leader and to the Councilors of the FNM explaining why they have taken the actions that they have taken with regard to their party.  The letter was damning.  The letter could only have been leaked to the press by one of those Members of Parliament or a source close to them.

The question is what did they hope to gain by it?

Who was their strategist?

They obviously were unaware of the Bahamian saying that when you dig one grave, you dig two.  This is a real case of that in action.

They thought they were hurting Dr. Hubert Minnis and they may well have condemned him by their harsh words and uncharitable comments to an election campaign with the PLP using the FNM MP’s words to kill him.  In reality though, they also have killed themselves.

Darron Cash said the right thing when he said that the matter should not have been aired publicly.  But he has been busy himself saying too many things in public. All of it damaging to the cause.

Everyone was piling on.  Even Branville McCartney, who has no dog in the hunt, was busy saying what Dr. Minnis should do to his colleagues for what they have done to him.  His advice: cut their balls off. Well except for Mrs. Butler Turner of course.

The FNM was described out of their own mouths as corrupt.  That was perhaps the most damning of all.  The PLP now has only to repeat it.

We thought that these were smart people.  That they knew that what they proposed to do going to the Governor General to remove Dr. Minnis was stupid and ill advised. Why? Because when they went to the Governor General, they could not take the name FNM with them.  The name is owned by the Council and they would have seats in Parliament without the support of the party.  So they realized we thought that they were in effective checkmate.

Further, Edison Key warned them that if they removed Dr. Minnis, he would simply leave the party.

The whole kit and caboodle, the entire doll house would break up.

In the meantime, the intrigue continues down in Long Island at the regatta with some of the players there: Dr. Minnis himself, Dr. Andre Rollins, Hubert Chipman and Tennyson Wells.  The knives are out.

Dr. Minnis has given them what they want.  They now have a second convention in six months. If Dr. Minnis wins, then what?  A portent of that to come was the fact that Dr. Minnis’ forces outplayed and overcame André Rollins forces in Ft. Charlotte at the FNM’s constituency association meeting on Thursday 2nd June. The defeat was said to be 68 in favour of Dr. Minnis’ forces and 5 in favour of Dr. Rollins.  Dr. Rollins’ forces say they are going to court to challenge the result.

As if the courts are not busy enough.

The PLP looks on lovingly and laughingly.

We end with our usual caution to our friends in the PLP; don’t take any comfort in these problems in the FNM.  A day is a life time in politics and you can’t be sure that the people at large are actually paying attention to any of this, or that it matters to them at all.

Let the FNM bury their dead.