THE GOVERNMENT REFUSES TO STAND UP FOR THE COUNTRY 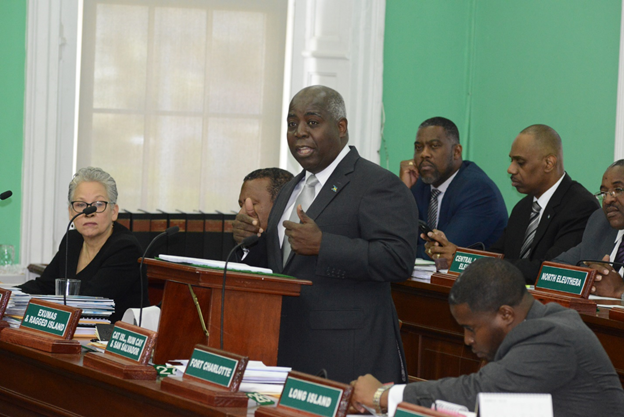 The FNM has proven to be traitors to the Bahamian cause. They stand up for nothing.  They lie supinely on their backs as people come in and walk all over us.  So the Leader of the Opposition Philip Davis stands in the gap and last week he issued a statement outlining what the PLP’s positon is on the Oban Energy Deal in Grand Bahama.  This came after the story spun by the Leader of the Government Dr. Hubert Minis that somehow it was the PLP’s fault that the deal they signed went through.

From The Office Of The Leader of the Progressive Liberal Party

On The Prime Minister’s Oban Energy Statement In The House

I am appealing to all PLP supporters and right thinking men and women of goodwill not to be misled or confused by the mishmash of words and the juxtaposition of rewriting history that was the tale told by the Prime Minister in the House of Assembly on Oban Energy and his decision to conclude an agreement with them. What a web weaved in the House by the Prime Minister on 20 March.

Firstly, this is not about the Progressive Liberal Party. The PLP did not sign an agreement with Oban. The record is clear. It is the FNM who signed a Heads of Agreement with Oban. This is particularly important since the FNM has now circulated a video showing former Minister Michael Darville in Grand Bahama touring the proposed project site. The PLP never signed an agreement because the stringent conditions which we applied were not met.

Secondly, it was the Prime Minister who sat in a room in his Office and watched one man sign another man’s signature on an agreement which he presented to the country as the totality of the agreement between Oban and the Government of The Bahamas.

Fourthly, it turned out that the assertions by the Prime Minister were demonstrably false. The agreement laid on the table was not the totality of the agreement between the parties. The Prime Minister has sought to explain that by saying that the TV camera signing was a ceremonial signing. However, he provides no explanation as to what is the real agreement and where it can be found.

Fifthly, the Prime Minister tells the House that Dhunna was in the country and on arrival the agreement was not ready to be signed. That Dhunna waited around and eventually signed an Agreement on the 10th February. If this is so, then where is this agreement?

Please PLPs and people of goodwill in The Bahamas, keep your eyes on the facts. This is an FNM deal. It was signed with a known fraudster at the table. The Prime Minister misrepresented what occurred at that signing to the nation and then again misrepresented what was done by his words in the House of Assembly. That is called deception. The PLP asks you to think on these things and what they say about the character of the one who now governs us; who seeks to dismiss this deception by saying they were merely missteps.