THE GREAT DIVE ACROSS THE FINISH LINE 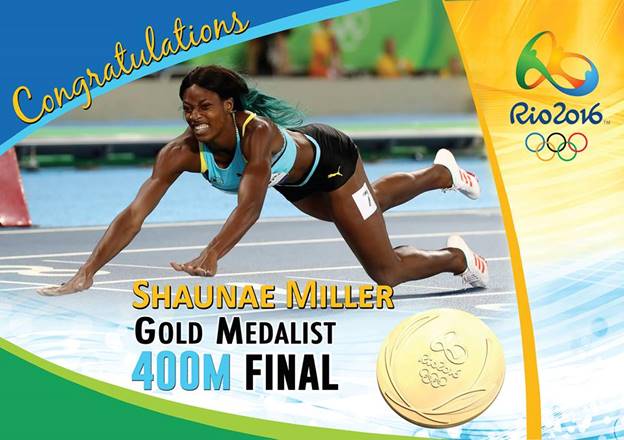 It is interesting how sports can really lift a nation. In the midst of a dreary, generic viagra miserable and broke summer, the poor in pocket and in spirit of The Bahamas jumped for joy as a skinny, tall, giggly woman ran her heart out for her country and dived across the finish line on 15 August at the Olympics in Rio. Bahamians have come to expect medals from the Olympics. We have medalled in very Olympics since 1996. That is a remarkable accomplishment for a small country of 400,000.

What is remarkable is that there was so much publicity about it. This was no ordinary win. This was a win that caused a stir. The American public seemed quite exercised about the fact there was a dive at the finish line. The rules say that the first person’s torso across the line is the one who wins. Unfortunately for the USA’s darling Allison Felix who came second, it was not her torso, so our Shaunae Miller won. Yay!

The Foreign Ministry announced the following in the wake of the victory:

The Minister of Foreign Affairs and Immigration Fred Mitchell has instructed all offices of The Bahamas overseas to put in the front of house today the largest possible photo of Shaunae Miller crossing the finish line in the 400 metre Olympic race in Brazil on 15 August, with the word: CONGRATULATIONS.

We show the results of the order in THE WORK OF THE MISSIONS ABROAD below.

Meanwhile back in America, they wanted to interview Ms. Miller about what happened. Her explanation, she ran her legs off and her legs went dead, and she kept saying to herself that she had to get this gold medal and then everything went dark until she looked up across the finish line. It was not clear who had won she said and then she was declared the winner by seven on hundredths of a second. Great day in the morning.

The country erupted in ecstasy and shouts of joy. The Prime Minister issued his own statement expressing his joy at the moment:

What a magnificent victory by our Shaunae Miller at the Rio Olympics yesterday! It will forever stand as one of those truly iconic moments in Bahamian history.

Shaunae gave it her all and then reached down into the deepest part of her being to summon up new resources of courage, will-power, determination and strength at the exact moment when she needed them most. Shaunae then crossed the finish line in first and in so doing rode into Bahamian history, capturing the admiration of the entire world in the process.

Shaunae’s victory is so emblematic of our greatness as a people. We never give up. We push above our weight. We fight with all our might, and we go for the gold with every sinew at our command. Shaunae showed us, and all the world, the best we are and the very best we can become.

On behalf of the Government and the people of the Commonwealth of The Bahamas, and on my own behalf, I congratulate Shaunae Miller on her great and glorious triumph in Rio yesterday. She has filled me and all of us with an immense pride. May God continue to bless her and all our other athletes at the Rio Olympics.

Shaunae Miller returns to The Bahamas on Friday 26 August at 4 pm. No doubt the country will be out in droves to welcome her home.

Welcome home indeed. A job well done. Bask in the love of the nation!