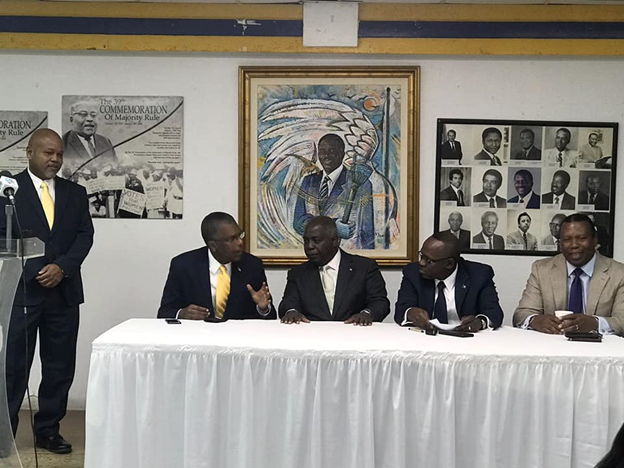 The Leader of The Opposition Philip Davis at Gambier House at the press conference 3 April addressing a range of issues including immigration, the allegations made by the U S about the PLP, BAMSI, the dismissal of Reece Chipman MP , the Bank of The Bahamas. From left Host Terrance Bethel, Senator Fred Mitchell, Leader Davis, Deputy Leader Chester Cooper, Picewell Forbes MP.

Thank you media for participating in our monthly briefing as the opposition PLP continues to constructively engage both the media and the general public on policy issues of national import that impact the lives of Bahamians everywhere.

I will deliver a succinct presentation and open the floor for questions but before I do, I wish to offer congratulations to two of my regional political contemporaries on the occasions of their respective electoral victories. As you know Grenada’s Dr. Keith Mitchell, the longest serving Prime Minister in CARICOM, was sworn in for the fifth time last month. Gaston Browne, Prime Minister of Antigua and Barbuda was also returned to office. On behalf of the PLP, I wish both leaders and their respective governments well.

On a sad note however, we note and express our condolences on the passing of Winnie Mandela, the former spouse of the late ANC leader and President of South Africa. Winnie became a world renown freedom fighter, civil and human rights activist and one of the principal symbols of the anti-apartheid movement in South Africa that eventually led to majority rule. May her soul rest in peace.

I turn my attention to domestic issues:

Immigration matters
Our principle concern on immigration is the protection of our territorial borders, our sovereignty and the preservation of our national identity.
We believe that recent court rulings, and in particular the Jean Charles and Bruno Rufa rulings, were wrong in law as the decision to permit or deny entry into The Bahamas rests with the executive and not the judiciary. In our view, the role of the courts is to ensure that the decision making process of the executive is always fair and rational to all parties involved, not to make decisions as to who could or should remain in the Bahamas.

Since the December 31st, 2017, deadline for all illegal and irregular immigrants to leave the country and a meeting with the Haitian President, nothing has changed. Irregular migration continues unabated with the expenditure of hundreds of thousands in public funds on repatriation efforts, draining our scarce resources that can be used to provide other essential services to our people.

The Bank of The Bahamas to fill the banking void on Islands
We wish to express our continuing concerns that communities are being left without basic banking service; Long Island and Great Harbour Cay in particular.
The Royal Bank of Canada announced earlier within the year of its decision to close four local branches:
Effective March 16, RBC’s Robinson Road and
March 16 – John F Kennedy Drive location
March 30 – Andros Town
April 13 – Grey’s location on Long Island

Again, the government is dragging its feet, appear unfocused and has failed to articulate a national policy in the wake of this economically disruptive exercise. We call on them to do so. Governments have a universal service obligation to all of its citizens as it works to build up the common good and banking services are not excluded.

The Purchase of the new post office
What are the facts on this new arrangement? How much will it cost the taxpayers to cancel the existing arrangements on the Tonique Williams Highway structure?
What is the cost to build and /or refurbish the new building?
Is Gladstone Road the right and convenient location for a general post office?
What will happen to the old post office building in town?

This decision seems to fly in the face of a government who loves to complain about public waste on the one hand, then by their actions, waste public funds, usually without justifiable explanations.

I point out that when we came to office in May of 2012, The Bahamas was designated the status of a tier 2 country in the TIPS category (Trafficking In Persons). The Bahamas was teetering on a tier 3 categorical designation if immediate actions were not taken with tangible results. Our proactive work and bilateral cooperation with the US Government elevated The Bahamas to a Tier One status on trafficking in persons. A Bahamian public official honoured by the US government for her work so we are constrained to ask, what is the basis of this allegation? We wish the US Embassy to name one specific incident where there was no cooperation.

Bahamians recall the public allegation that was never refuted in which the US government used the lawful authority to track drug traffickers to violate the privacy of mobile phone users in the Bahamas. A responsible and sovereign government must stand up for the rights of Bahamians.

The facts are the former Administration the Foreign Minister – Sen. Mitchell – held regular meetings with the United States Embassy and I am advised that such concerns about corporation were never raised by the Charge-d’Affairs.

I served as Deputy Prime Minister and have had regular meetings on matters of national concern and never have such concerns about cooperation been advanced to me. Interestingly the report for 2017, no complaint was made about co-operation or lack thereof.

As Leader of the Opposition, I made note of these comments and I have taken leave to write to the US Embassy to have the matter clarified.

BAMSI
Reports that the government has not built upon but scuttled the plan for agriculture development at BAMSI is disappointing. The Prime Minister was recently in Haiti promoting and offering state support for Haitian agricultural products while refusing to meet with Bahamian farmers. The agriculture Minister talks about a commitment to food security but the executing mechanism to achieve this, BAMSI, is being institutionally undermined. While the staff complement has doubled at BAMSI since 10th May, farming production has not. The valuable work that was done there should not be set aside and the marketing arm of BAMSI must be allowed to do its work as this provides valuable support to farmers and solves the issues of reliability and quality that were at the root of the complaints by grocers for years.

National Honours
The Prime Minister has still not appointed the Committee to begin the work to choose the honours that are to be announced on 10 July.

Appointment of Chief Justice
For some months now this administration has ignored the Bahamas Bar on the Appointment of A Chief Justice. Justice Stephen Isaacs has since served as acting since November 6, 2017. Why is there a delay in filling such an important post? We see in the newspapers this morning that former Bahamas Bar Council President and current State Minister for Legal Affairs has joined his fraternal brothers at the Bar in calling for the immediate appointment of permanent Chief Justice of the Bahamas Supreme Court. The PLP agrees with the Hon. Elsworth Johnson.

Prime Minister Minnis must be forthcoming. He cannot on one hand make the assumption that he intends to weed out corruption wherever it is found. Make the claim to deliver a transparent and accountable government to the people of the Bahamas – and then in this case with Mr. Chipman – cherry pick his decision on whether to explain to the public on what he found with respect to his sacked chairman.

Airspace income follow-up [Controlling our Airspace]
The PLP government signed a landmark agreement with Federal Aviation Authority (FAA) for the eventual operational and management control of our sovereign airspace. We have heard nothing from this government on this matter and we simply seek an update from the government.

The Crisis State of Healthcare – What is the status of NHI?
While the Health Minister goes around describing the problem in healthcare as a crisis for the past ten months, he seems lost as to why he was hired as health minister. The state of healthcare has worsened under Dr. Sands. I offer a few examples:

• Closure of the Coconut Grove Clinic – WHY?

• The Failure of the department to supply needed ventilation equipment for intensive care patients.

• The most recent announcement by the Minister for Health to commence an Audit of the PHA.

As for the audits conducted to date, what are the costs of these audits?
What is the process of bidding to have these audits done?
Is Ernst and Young again the choice auditing firm chosen for the PHA Audit?

The constant borrowing to the tune of $1.7 BILLION since June 2017–

o The layoffs throughout the service continue, the government claims they are saving money but the unsustainable borrowings continue.

o The slashing of services and social assistance [Cancelling of the RISE Programme], but the borrowings continue.

o Notwithstanding an announced plan of fiscal austerity, the borrowings continue so we are obliged to ask – where is these entire borrowed funds going?

o Here is a government that, since coming to power, has borrowed more than 1.7 billion dollars – yet – they are laying off staff, terminating contracts, sending home scores of minimum wage workers like some Urban Renewal teams around the country, and cannot find funds to purchase essential equipment, pay staff on time, supply sufficient beds and medications in the country’s public health system? What are they doing with all of this money?

• The Prime Minister continues to duck questions on Oban
• The financing arrangements, the EIA? The feasibility given the glut in the market
• The Prime Minister also has claimed that Oban principal Satpal Dhunna signed the HOA on– [GET THIS NOW] Saturday February 10th.

• But he announced it knowing full well that Satpal Dhunna had already signed a HOA on the February 10th.

• Mr. Dhunna confirmed that he was not in the country to sign on the 19th and still the Prime Minister caused to be tabled into the records of the House a document, but failed to table the February 10th dated Agreement.

The PM has asserted that they were missteps. Clearly these are not missteps – not on a $5.5Billion dollar investment and the future of Grand Bahama’s ecosystem at stake. These are deliberate actions taken to deceive the Bahamian people. The PM’s actions rank of political payback to his FNM cronies and special interest groups. We believe that the PM misled Parliament and the Bahamian People. We already know the FNM lied during the campaign and it seems they are lying now. We are asking for the deal to be cancelled. We are asking for the PM to come clean on the details surrounding this bad deal, because one thing we know is that “NO LIE LAST FOREVER” and the truth will eventually surface.