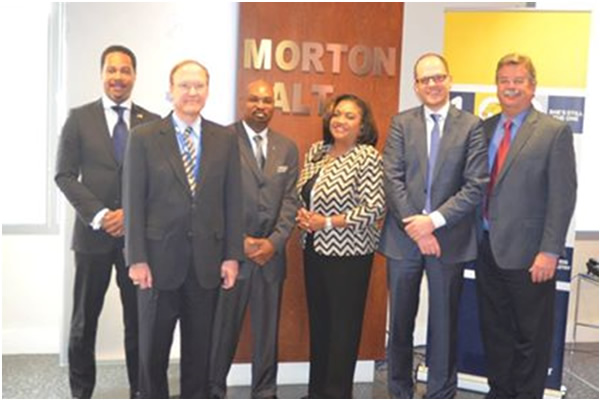 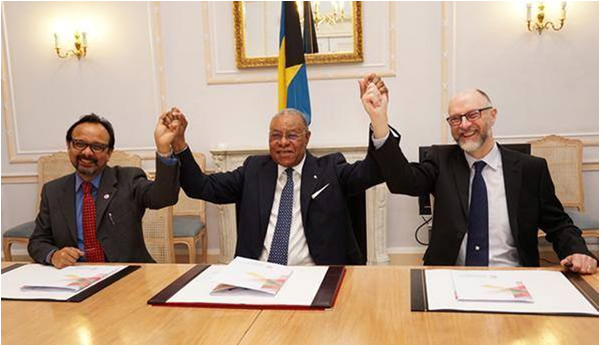 LONDON–Senator Dr. the Honourable Bhoendradatt Tewarie, Minister of Planning and Sustainable Development in Trinidad and Tobago, paid a courtesy call on High Commissioner Bethel at Bahamas House on 2 April 2015 to discuss his candidacy for the position of Secretary-General of the Commonwealth.

Dr. Bhoendradatt “Bo” Tewarie was appointed a Senator and Minister of Planning, Economic and Social Restructuring and Gender Affairs on May 11, 2011 during the 10th Republican Parliament.

Dr. Tewarie was first elected to the House of Representatives in 1986, as a member of the National Alliance for Reconstruction government. He was the member for Caroni East, and served as Minister of Industry, Enterprise and Tourism, in addition to Leader of the House.

Dr. Tewarie would subsequently become Pro Vice-Chancellor and Principal of the St. Augustine campus of The University of the West Indies (UWI). He served as Executive Director of the UWI Institute of Business (IOB) for nine years before being appointed Principal, UWI, St. Augustine in September 2001.

Dr. Tewarie has been a Fulbright Fellow, a Visiting Scholar at the Pennsylvania State University and a Senior Associate Research Fellow at the North-South Centre of The University of Miami. He is a member of the Board of the Trinidad and Tobago National Commission for UNESCO and was for six years Chairman of the National Institute for Higher Education, Research, Science and Technology where he facilitated the creation of COSTAATT (the College of Science, Technology and Applied Arts of Trinidad and Tobago) and the foundation work for the establishment of the National Accreditation Agency. He also developed the rationale for the establishment of the National Training Agency (NTA) and most recently was Chairman of the Committee which formulated a National Policy for Tertiary Education for the Vision 2020 Committee.

Dr. Tewarie is currently a member of the Board of the Caribbean Examinations Council and the Board of the Trust Fund for the Caribbean Court of Justice. Dr. Tewarie is also a member of a number of Private Sector Boards. He has published many articles and book chapters on economic, educational and developmental issues as well as a book on University Governance in the Twenty-First Century (Jossey-Bass) (2004). In 2002 he guest-edited for Caribbean Quarterly a special issue to commemorate V.S. Naipaul’s award of the Nobel Prize and wrote the lead article “A House for Mr. Biswas Revisited: Ethnicity, Culture, Geography and Beyond”.

The appointment of Secretary-General will be decided at the Commonwealth Heads of Government Meeting (CHOGM) in Malta from 27 to 29 November 2015.