THE OBAN DEAL IS RESURRECTED? 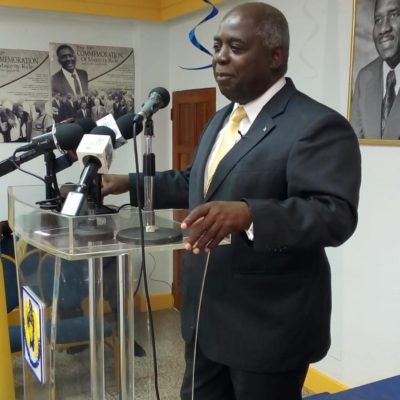 Statement from The Leader of the Opposition

On Oban  being Resurrected

The Progressive Liberal Party is concerned that the Government is seeking to resurrect the Oban Project.  Statements from Dion Foulkes, the Minister who is charged with  the review of the project, indicated last week that the matter may be resurrected.  That is bad news. We do not support this project and the matter should be abandoned. It will be injurious to the environment in Grand Bahama and of little economic benefit.

The Prime Minister still has much to answer for on this policy debacle. He presided over this sham of a ceremony, seeking to fool the public.

To add insult to injury, the Education Minister appointed by none other than the Prime Minister himself publicly admitted that the government broke the law.

None of these acts committed in the full glare of the media and the public has been addressed by the Prime Minister. This shows an incredible disrespect for the rule of law and parliamentary convention.

We say to the Most Honourable Prime Minister who loves to go around the world calling people corrupt, “physician, heal thyself.”

No amount of attempts to obfuscate, mislead and rewrite history can change the facts on the corrupt and fraudulent OBAN mess.

The country wants nothing to do with OBAN; Bahamians have lost all confidence in this government concerning this controversial deal and the public rumblings and din that this is nothing more than a land grab for the FNM oligarchs are deafening.

Additionally, evidence of adequate funding, the source of the funding, the identity of all of the beneficial owners and the requisite baseline environmental impact assessment have not been satisfactorily provided.

The FNM must stop misleading and disrespecting the Bahamian people.

If transparency is the watchword of the FNM then, or so they say, then their actions must match their glib public rhetoric.

Some unsolicited advice to the Prime Minister: lose this controversial and scandalous OBAN project like a bad habit.