THE ONLY PERSON UNHINGED IS CANDIA DAMES 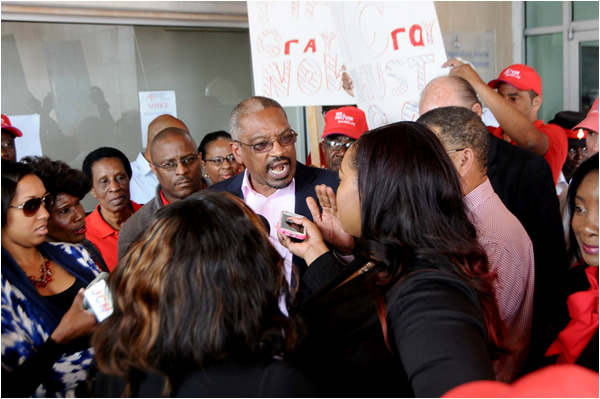 Hubert Minnis, buy cialis ed Leader of the FNM with all 22 protestors on 30th March at Alfred Gray’s office.

Here was the statement spoken by Perry Christie on 26th March to the student journalists of the College of The Bahamas:

“When I was going around Centerville, eight consecutive elections, none of them were there. When I was talking to the people who vote for me, none of the journalists were there with me. When I promised them I going do my best to help them, none of them were there. Their judgment as to whether I’m doing my best, to hell with them. It’s the people with the power, people whose aspirations are for a better way of life for themselves, and their children. You have the right to believe what you believe, to write what you believe. I must respect you for that. But respect me for what I’m trying to do.”

That statement was run with a banner headline the next day in The Tribune in red.  The Tribune is of course in a desperate competition with that piece of dog excrement paper called The Punch.  Such is the state of the market.  But meanwhile over at the Nassau Guardian, you have this lady Candia Dames who is a specialist in vendetta politics.  She is unable to give any objective opinion about the Prime Minister and so she is taking up where the racist opinions of John Marquis of the Tribune left off; she is busy savaging Perry Christie at every turn.  She wrote in her so called National Review on Monday last under the headline UNHINGED.  She wrote that Mr. Christie had lost it because of what he said in the quote above.

With the greatest of respect, the only person who is unhinged in this whole affair is Candia Dames.  She has the challenges on ethics and journalism and needs to go back to that class.  She just has to see Perry Christie’s name and her waters start to flow. We have listed them before.  You cannot be so filled with hatred, anti PLP fervour, that you forget that you have a job to be balanced if not unbiased.  She does not meet that standard and cannot meet that standard.

The whole Christie statement was taken entirely out of context and it shows the problem with what Carvel Francis calls the wutless media.

She is like the FNM. There is a rush to judgment on everything.  Poor Alfred Gray, the minister accused of abuse of authority, now has to lawyer up with Wayne Munroe Q C because he  has done what all Ministers of Local Government do when  they speak in confidential conversations with their   administrators.  Administrators ask for advice from ministers all the time. The discussions are private and confidential.  The fault is in disclosing that such routine conversations go on.

In the meanwhile without any pretense at  balance, the hapless and hopeless FNM leader  Dr. Hubert  Minnis who has no interest in debates with the Prime Minister, for which most people think he is now a ducker and dodger,  showed up on the doorstep of Alfred Gray’s office with 22 people on 30th March ( see photo and count them).  Ah my, the Leader of the Opposition cannot even gather 100 people.   What a shame, what a pity.  This is to force Mr. Gray to resign.  It seems to us that they will be crying out ’til the cows come home.

Here is our take.  We don’t come down on one side or the other on the bona fides of the scenarios: whether it was a good idea to say the hell with them or whether Mr.  Gray should have spoken to the press.  On this occasion and in this setting, we are simply pissed off at the piling on of people who have no objectivity in the matter.  The very last person to talk is Candia Dames who wouldn’t know objectivity if it slapped her in the face.  As for Hubert Minnis, this is a desperate man and desperate men as we all know will do desperate things.