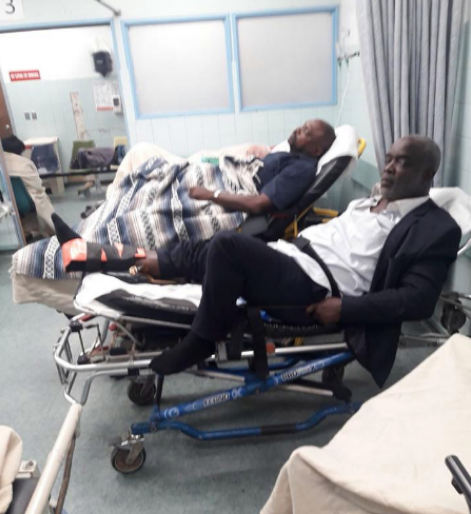 Omar Archer got punched in the face while being restrained by a phalanx of police officers in and out of uniform. There is a video of it that shows the self proclaimed activist being shoved into a wall then seconds later, being sucker punched in the face by a person we assume is a police officer wearing blue fatigues.  A moment after the first punch, the video shows Archer being punched again in the head.

Archer has said and done a lot of things that defy any notion that he is a sane person. He is not. While being prosecuted for threatening former Jr. Minister of National Security Keith Bell, Archer escaped from police and jumped from a third floor window, shattering both legs. It was a completely insane thing to do. Archer has had a long and dangerous relationship with the police, having been arrested or questioned by police for numerous issues ranging from threats of death to domestic violence to just plain dumb shit like posing with a shotgun.

So it’s not surprising that there would be some kind of vibe with police officers. We do not know what the issue was that warranted cops coming in force for Archer or for snatching him up and as much as The Peanut Gallery feels Archer is most deserving of her cut ass, there is something very wrong with the image of police officers violently apprehending him and attacking him physically and in a cowardly fashion. In fact, the images were almost identical to images we have seen coming from the US where white cops have begun hunting mostly Black men. Except the cops were all black and their victim is black also. The cops seem not to understand that in this day and age, everything is subject to being video taped. Their situational awareness is not the best if they can assume that they can grab up Omar Archer in a party session, shove him around, strike him and it’s not viral over WhatsApp or posted on Facebook in five seconds flat. Dumb cops do dumb things. It was wrong what they did. Omar will now feel even more emboldened to stand up as if he is a martyr for all that is good and right despite the fact that he is a bonafide jackass of epic proportions. He has to be hating Minnis right now and it serves him right. He lied and lied and lied on behalf of Minnis during the 2017 campaign. He lied and said Perry owned the condo complex being built on Cable Beach. He lied and said Alex Christie got $10 Million from the VAT money that they claimed was gone before the elections but found right after. He lied about a lot of things because he was one of the fools to “Roc with Doc”. Now look at him. He’s battered and bruised his feet standing in Rawson Square for five days and once again, is in bandages because Doc’s Cops came for him with fists flying.

Serves him right. He is dirty and a shameless mercenary and now he is on the outs with Doc and is hated by the police. His partner in crime Chrissy Love has a jail cell waiting for her whenever she returns to The Bahamas. Oh how the mighty have fallen. At least Omar can be glad that the fall this time wasn’t from three stories but only from grace. Good for him. 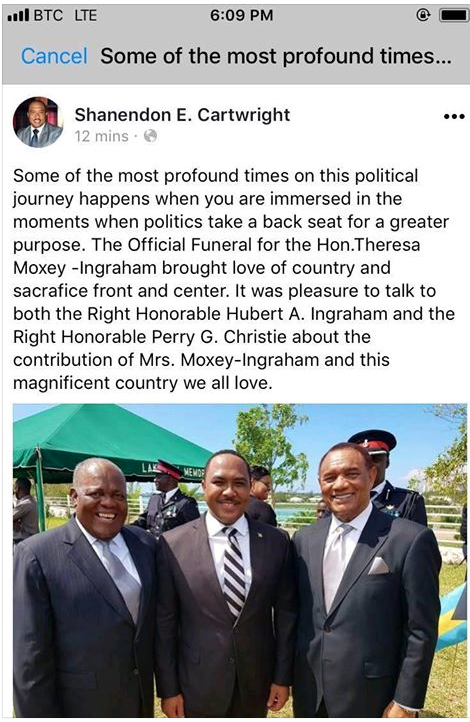 If you watch the media like The Peanut Gallery does, you will notice a trend in how certain members of the FNM side are treated in the media. While the press seems to be confused by the Misadministration’s basic lack of common sense with anything, they seem to be building up quite a love affair with a couple of Minnis’ MPs. One is Minister of Agriculture Renward Wells and the other is Shanendoa Cartwright. Wells has become a fixture in the press. Open an newspaper or turn on the TV and you will see something to do with him or his ministry. Even when it was cleaning up the asinine comment by Misadministration that he couldn’t wait to eat Haitian bananas or ducking Bahamian farmers from a meeting that he agreed to. It was Wells who came behind and smoothed things over. He is the smart one it seems. Keep an eye on that one. Cartwright has less to work with but he does have an eye for self promotion. After hurricane Irma, Cartwright made sure that images of him sitting on a roof top off Market Street made the social media rounds. Then there was the stunt of him riding a bicycle through St. Barnabas, with a photographer to capture it. Then the library in the park. Photo. Then there is his work with the Parks people where he got them tee shirts and has been seen wearing one while working long enough with the laborers to be photographed. So it was no surprise to see Cartwright posted between the Prime Ministers Ingraham and Christie. No Minnis in the shot.

The Peanut Gallery says these two should be careful. Flying too high can cause problems. Just ask Icarus what happened when he started to feel himself and flew too close to the sun. The wax on his wings melted and he fell to his death. Word to the wise.

PrevPreviousARCHDEACON HARRY BAIN TO BE THE NEW DEAN OF THE CATHEDRAL
NextTHE POST OFFICE PROJECT: A REQUIEM OF PUBLIC WASTENext