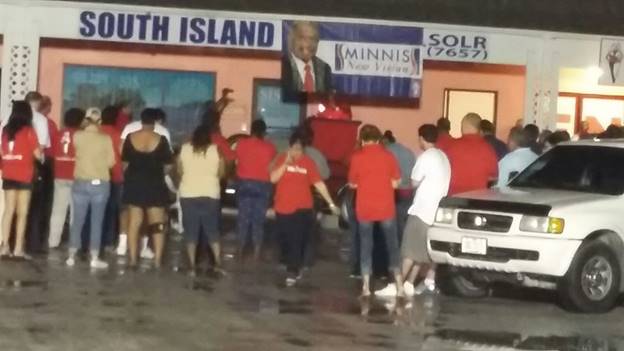 More political posturing in the media from Opposition leader Dr. Hubert Minnis can only be seen as a lame tactic of deflection from the fact that he and the FNM have failed to demonstrate a belief that ALL Bahamians deserve access to quality and affordable health care.

They have no viable plan and have never demonstrated a conviction that the more than 100,000 Bahamians without health insurance need to be insured as a human right because the country’s strength depends on the health of ALL of its citizens, not just the affluent and privileged.

WHERE THE POLICY EVIDENCE THAT MINNIS ACTUALLY CARES ABOUT THE WELFARE OF THESE BAHAMIANS?! OPPOSING?! CRITICIZING?! CALLING FOR A DELAY?! THOSE ARE NOT POLICIES! ANYBODY ON A STREET CORNER OR IN A BAR CAN DO THAT?!

Opposing the governing Progressive Liberal Party for the sake of opposing is not a plan, does not require a modicum of leadership or vision as only lazy people that are bankrupt of ideas posture and deflect to cover up inherent deficiencies. The PLP government for its part has and is executing their plan to enroll over 100,000 Bahamians in a publicly funded and administered insurance plan because it is the right thing to do for Bahamians and it is consistent with our core values and tenets.

Another piece of evidence that is proof positive that the FNM does not believe that every Bahamian deserves access to affordable healthcare is their propensity to keep jumping on both sides of the issue – ensuring that they are always in a position to oppose. Bahamians are fed up with this type of so called leadership. The FNM is now accusing the government of trying to bribe health professionals when the government revealed that given its exigencies, a finite amount of $31 million will be allocated to NHI during the first quarter of 2016.

OUR PLAN IS AN INDIVIDUAL MANDATE AND A PUBLIC OPTION TO COVER ALL BAHAMIANS TO BUILD A STRONGER BAHAMAS BY IMPROVING THE HEALTH OF BAHAMIANS AND DRIVING DOWN THE OVERALL COST OF INSURANCE PREMIUMS. THIS IS A WIN WIN FOR ALL BAHAMIANS INCLUDING EMPLOYERS.

The country is eighteen months away from a general election and Minnis and his FNM not only have no plans for NHI or UHI, but they still do not have a strategic plan for energy reform and the reduction in the cost of electricity. Energy reform is also critical to building a stronger Bahamas. This is yet another example of Minnis’ lack of leadership and vision for the future growth and development of The Bahamas. The PLP government for its part is in the advance stages of executing its plan for energy reform inclusive of power self-generation, alternative energy options, BEC reform, the reduction of electricity costs via PowerSecure and robust legislative and regulatory regimes to govern the entire process.

Minnis’ counter plan to build this so called new Bahamas is to, you guessed it, oppose the government’s energy reform plan because of some risk to BEC, conveniently and dishonestly “forgetting” that many of the terrible and failed policies of the FNM placed BEC in its current untenable position; we can start with the BEC criminal bribe debacle under the governance of the FNM. Obviously totally clueless on how to lead BEC out of its current dire financial and operational straits, Minnis resorts to political posturing and deflection in the press to camouflage his considerable deficits in leadership and vision.

In the end, more than one hundred thousand Bahamians are in need of access to affordable quality health care and thus far, only the PLP government has designed and is advancing a viable model and executing mechanism for delivery of this vital public good.

Minnis and the FNM meantime are busy opposing, criticizing and betting against the best interests of the Bahamian people and unwittingly creating reasonable doubt about their ability to lead this country.