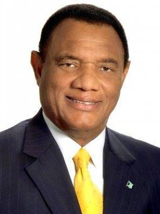 Nassau, The Bahamas — During his Communication to the House of Assembly on VAT (Value Added Tax) Revenues, Prime Minister and Minister of Finance the Rt. Hon. Perry Christie said, on March 29, 2017, that any “financial person or purported financial person” that suggested there was reasonable expectation that debt levels would decline immediately with the implementation of VAT was being “disingenuous at best and deceitful at worst”.

“The world is watching us, let us demonstrate our collective intelligence and not our selfish motives when we discuss our fiscal affairs,” Prime Minister Christie said. “Our general public expects nothing less.”

“To repay debt, the Government must first address the root cause of continued debt accumulation: If we spend more than we earn, we must borrow,” Prime Minister Christie said, as he addressed the topic “Tax Reform, Introduction and Impact of VAT” in his communication.

Prime Minister Christie said his Government accomplished the reduction by developing and introducing early in its term a “detailed Medium-Term Fiscal Consolidation Plan” that is designed to bring order to the public finances and gradually lead to lower levels of Government Debt in a balanced and targeted fashion, with policy action in respect of both expenditure and revenue.

“The Medium Term Fiscal Consolidation Plan includes plans to further enhance revenues, while enabling economic growth and expenditure with breakeven projected for FY 2018/2019,” he said. “Surpluses are projected thereafter and the decline in debt would be observed. If there was deficiency for fully articulating this clearly, the Government accepts this criticism and is now laying out the full account of how VAT would repay the debt.”

In line with the Medium Term Fiscal Consolidation Plan, Prime Minister Christie asserted, the Government had implemented “the most fundamental and progressive reform of the fiscal and tax systems in the history of the nation”.

“This programme of reform has been a resounding success in producing the significant improvement in the revenue yield of our tax system that is vitally necessary to support sound and sustainable fiscal policies, including deficit and ultimately debt reduction, and improving modern governance in The Bahamas,” he said.

Prime Minister Christie said that the cornerstone of tax reform has been the implementation of a Value Added Tax that was thoroughly designed, planned and implemented after the widest public consultation and on the basis of expert international advice, as well as best practice and experience with VAT systems in a number of other countries.

That process of consultation on VAT was the most progressive act of collaboration between the private sector that is the creator of economic activity; the general public that must bear the cost of taxes but ultimately benefit from the programmes that taxes enable the Government to provide; and the Government of The Bahamas that is tasked with enabling an environment for economic prosperity while ensuring that “what is done is be for the least of us is done befitting the royalty among us”.

“The consultations included the provision of time for the private sector to research alternatives that it had proposed, principally payroll tax as well as VAT,” Prime Minister Christie pointed out. “Their own research not only supported VAT, but it was empirically demonstrated to those that had doubts that such implementation would not doom the economy.”

Prime Minister Christie rhetorically asked the question “Is there ever a previous time when such public private sector partnership has been so vibrant?” Adding that his Government maintained responsibility; but employed the collective wisdom of the stakeholders in the country.

“As a result, the Bahamian VAT was introduced in an impressively smooth fashion and the tax has generated a more buoyant stream of revenue than had originally been expected,” he stated.

Over the first two full years of its existence, the VAT had produced some $1.1 billion in gross revenues, he added.

“This, in turn, has contributed to an important improvement, as desired and planned, in the revenue yield of our tax system, from 17.2 per cent of GDP in 2013/14 to a projected 23.7 per cent of GDP for this fiscal year in the last Budget,” Prime Minister Christie said. “Such a level for the revenue yield is more in line with that in other regional and first world economies and more suitable to modern governance in the 21st Century.”

In introducing VAT, Prime Minister Christie said that his Government expressly stated that it would, based on collections experience with the new VAT, introduce reductions in other taxes to the extent feasible.

“We have, therefore, been crystal clear that our programme of tax reform, including the introduction of VAT in 2015, has manifold objectives,” he said.

Firstly, he said, tax reform and VAT per se as a new source of revenue have “unquestionably” been targeted to secure a significant improvement in the public finances of the country through, for example, lower levels of the GFS Deficit and ultimately lower levels of Government Debt.

Secondly, he continued, tax reform, including VAT, has been designed to produce an “appreciable” improvement and stability in the revenue yield of the tax system — enabling the Government to more effectively and sustainably finance modern programmes and services for citizens.

“By stability, I am referring to improvement and consistency in collection rates, as VAT has the highest compliance rate of any tax system in The Bahamas, and by capturing the broadest base to be taxed; no goods or services are excluded with limited exceptions,” Prime Minister Christie said.

Thirdly, he added, the VAT, specifically as a new revenue source, has been instrumental in facilitating reductions in the tax burden of consumers and businesses in respect of the other major taxes.

“Fourthly, VAT was introduced as a central component of our tax reform plan as it has been shown to be more supportive of stronger economic growth and job creation, as compared to other tax policy alternatives,” Prime Minister Christie said.