THE PUNCH UP TO MISCHIEF, THE GOVERNENT RESPONDS 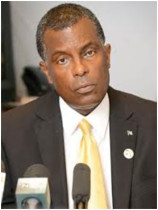 Fred Mitchell, the Minister of Foreign Affairs, delivered the following communication to the House of Wednesday 15th April following a published story in The Punch which alleged the lie that the US government had chosen Jamaica over The Bahamas as a snub to our country and Prime Minister.  Most people know what is in The Punch is a fairy tale and a set of lies but just in case:

Mr. Speaker, I wish to lay on the table the statements made by the Prime Minister in Kingston, Jamaica on 9th April at a summit with the President of the United States  Barak Obama and at the Summit  of the Americas in Panama City in Panama on 11th April.

Both meetings were highly successful and the missions, the aims and objectives were achieved.

The Bahamas has always supported the idea of a continuing conversation with the United States which is our largest trading partner and with which we have so much that we share.  We welcomed the meeting and were integrally involved in all aspects of its planning.

1. The venue for the CARICOM-US Summit was chosen based on the roll-out of a significant US education portfolio initiative, and that the University of the West Indies, Mona Campus, in Jamaica, represented a multinational venue/campus in order to launch such a program for the Americas,

2. Additionally, the venue offered the most suitable and opportune use of the President’s time on the way to the Summit of The Americas which was being held in Panama. The logistics (travel time and air travel etc) to Panama was a contributing factor.

The choice of the venue had nothing at all to do with any domestic issues in The Bahamas.

Any such allegation is patently false.

In June of this year there is to be a summit on Citizen Security to be hosted by The Bahamas in Nassau.   Leaders from around the region and the United Sates are expected to gather in Nassau for that meeting.

There were several commitments made by the U S President at the summit in Jamaica with regard to National Security, Financial Services, Competition and Energy.  The US President indicated that his administration will move quickly on these matters.

It remains only for me to say that the role of the Prime Minister in ensuring that these meetings were a success is unchallenged.  The meetings were an unqualified success.  I would like to thank all the team that supported the meetings at Caricom and in our own Ministry of Foreign Affairs, the Ministry of Foreign Affairs of Jamaica and the Office of Prime Minister in Jamaica for ensuring its success.

In Panama, the Prime Minster was able to put the country’s definitive position on immigration once again saying to the world and the hemisphere that we will not apologize for the actions which we are taking on immigration.  He called on Border States to do their part to stop their citizens from breaching our borders.