THE REACTION TO THE TRANSGENDERS 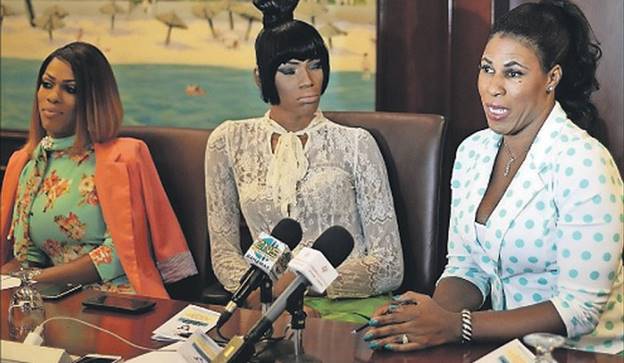 Last week, the Facebook page of Bahamasncensored.com  received an unusual request from Erin Greene, the Head of the LGBT community in The Bahamas and their chief spokesperson.  Now we find her a brave and courageous person.  We were surprised at the request.  Ms. Greene wanted the picture posted here again today, taken down from the site because she believed that this was causing transgender people to be targeted and therefore might suffer violence.

From time to time we have these requests and as a matter of principle we refuse them all.  We cannot rewrite history.  The act is one the individuals in the photo chose to take, taking on a public role, their lives are in the public domain and therefore they take on the risk and benefits and the opprobrium which comes with being public figures.  When they chose to step out as they did, they must have known and anticipated that there would have  been push back from what they said, particularly given the controversial nature of the phenomenon which they espouse.

The last thing this column would want to do is to create harm for them.  We believe of course that this was fed by a piece of wickedness by Philipa Russell who we understand has now been suspended as a talk show host on ZNS.  Ms. Russell is on a campaign of some other kind to inflame the Bahamian public about  the referendum based on a tissue of  untruths.  This has nothing to do with us and transgender people.

Our position is simple.  Bahamians need to understand this and get over their prejudices about people whatever they are.  In this country, all Bahamians have right to their identity, to self-identify and to create for themselves an image for themselves once it does not damage the public interest and the rights of others.  That is ingrained in our constitution.  Therefore people who are transgender have a right to do so what they do and to be what they are without let or hindrance.  No one has a right to denigrate them in a personal way for what they are.  No one should attack them.  They should be free to live, work and act in peace in community with us and with one another.  No one should exclude them from jobs from health care or from any other civic right to which Bahamians generally are entitled. This includes marriage equality.

Now that however is quite a separate question from the issue of the referendum today.  The referendum today is about one thing: giving women the same rights that men now have in the constitution and vice versa.  It is about nothing else.

It is reprehensible that these old preachers who have trouble taking care of their homes businesses in bed and who  are  getting in other people’s home bedroom business have so mixed up this  thing, that it is putting people off the main target.

Then you have people like Dame Joan Sawyer, the former Judge, who just doesn’t know when to shut the eff up.  This is a woman now saying that she is going to vote against women being equal in the constitution. She should be ashamed of her damn self.  No amount of legal mumbo jumbo can change the fact  that what she has said has damaged the cause and is effen foolishness.  She needs to go sit down.

So no we did not take the photo down. Yes we support rights for  transgender people, no more than the rights of all Bahamians.  Yes we are voting yes to all the bills and who doesn’t like that can  take the hind most.