THE SUCCESS OF THE CARNIVAL 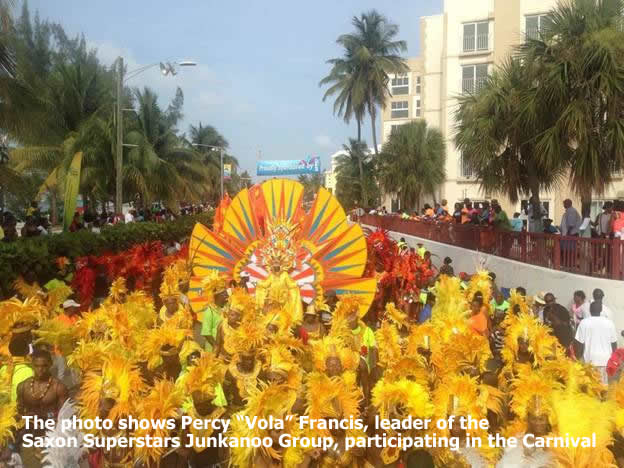 This week, we share with the readers of this column some of the responses of the commentators and pundits about the carnival put on by the Government on 6 May to 9th May.  It was an unqualified success.  It was so successful that you had a slightly tipsy Branville McCartney, the Leader of the extra parliamentary Democratic National Alliance (DNA) congratulating the organizers on TV—couldn’t quite bring himself to be gracious enough to say thank you Perry Christie but what he said would do.  Then the old sour puss Candia Dames, the Nassau Guardian’s editor, was able to run the headline VINDICATED to describe what she said was the vindication of Perry Christie, perhaps using his word, in the face of often withering criticism of the whole carnival effort.  It would have been interesting to see the ample figure of Ms. Dames rollicking, mammary glands a bouncing, in the Carnival but never mind next year. But we digress.

When they had all sobered up so to speak, they were busy talking about accounting for the money spent and yada, yada, yada.

We want to congratulate the government.  In that there is no surprise.  We want especially to congratulate Paul Major who has now cemented the title of the Mr. Go To Guy when you want to get an idea executed and you want to be sure that it will be carried out efficiently and with integrity.  Whatever they taught in junior school, at SAC and working at Citibank, he learned it well and he carried off this one with finesse and directed grace.

Now for those who are still biting iron, sucking sour grapes and other assorted misfits who can’t see the forest for the trees on this one.  In that group we put people like Ian Strachan, more of what we say about him later;  Lincoln Bain—what can you say about him but bitter bitter bitter.  The one we can’t understand is Celi Moss, bright guy but negative, negative, negative.  The leading Mr. Bah Humbug though is the Leader of the Opposition Hubert Minnis.

Tens of thousands of FNM supporters were out there at the Carnival.  No doubt they had a good time.  Tens of thousands spent money, and provided a profit for the scores of vendors who were selling stuff at the event.  One story we found moving and compelling:  a lady who didn’t know how she was going to keep her kid in school, made enough at the carnival to pay her child’s school fees.  To us that made the whole thing worth it.

Nicolette Bethel who used to be the Director of Culture couldn’t quite seem to make her mind about it and maybe she has a point as you will see later.  Here’s our point though.  The late Winston “ Gus “ Cooper and Percy “Vola” Francis, pictured above, stood with Fred Mitchell, the Minister for Foreign Affairs at the Junkanoo parade in  Marsh Harbour, Abaco   in February 2013.  One is the founder of the Valley Boys, arguably Junkanoo’s greatest group.  The other is the leader of the Saxons, the greatest rival of the Valley Boys. The two them said to Mr. Mitchell that it was time to take Junkanoo to another level.  They had just come from Brazil and they saw how Brazil’s Carnival was.  It was an industry which supported the work of artists all year round.  They needed to do the same with Junkanoo and they needed for the government to embrace that vision.

They got Perry Christie to buy into the idea and he sold it to the wider government.  Fast forward Ministers Danny Johnson Obie Wilchombe and Paul Major and his Committee and all the controversy and back and forth.  The end of the day is that from Gus Cooper, bless his departed soul struck that first blow to create the Valley Boys, he had a vision for the future of culture in The Bahamas.  It took from 1955 to 2015 for that vision to come true.  That is 60 years.   Andre Rollins, impatient to succeed, could learn a thing or two about how time passes and how ideas sell.

For our money though the best treat, excuse us ladies, was the sexy “old gals”. We won’t name those who put on their costumes and bared their flesh for our entertainment.  Old age wears well on them.  They are still beautiful gals, that’s the point.  The nation had fun and plenty of husbands will be shelling out next year while their wives are on the road march, and they will be sucking salt back home on the couch watching it on TV. Next year we look forward to Loretta Butler Turner, FNM MP, fully regaled, joining those sexy old gals in the road march.

But fellas hands off these women, they belong to some pretty powerful men in this country.