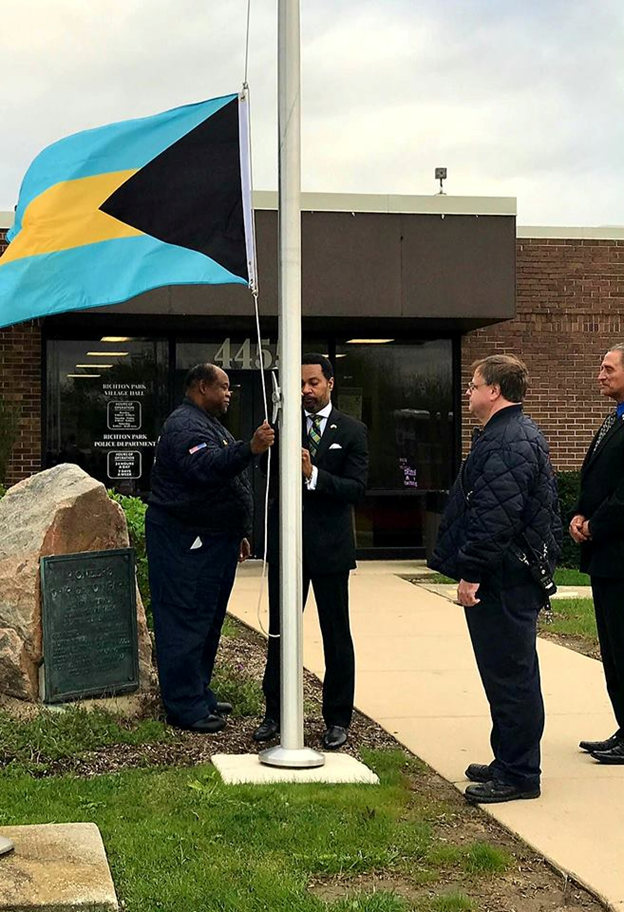 Richton Park, Illinois – The Honorable Michael C. Fountain, Bahamas Honorary Consul to Chicago, celebrated with the Honorable Richard Reinbold, President, Village of Richton Park, the second official flag raising ceremony in his jurisdiction, 27 April 2017. The ceremony was held to install the Bahamas flag for permanent display at the Village Community Center and to officially commemorate the sister city relationship between the Village of Richton Park, Illinois and Cat Island, Bahamas. 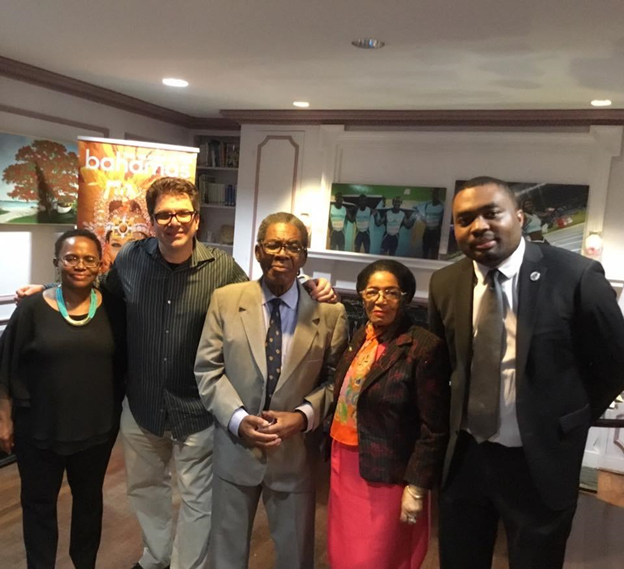 WASHINGTON, D.C. – The Bahamas was again revisited as a focus of an event sponsored by THINGS TO DO D.C. that has become a staple social event for young professionals in the Washington, D.C., area on Friday night April 21, 2017.

Billed as an occasion to introduce D.C. young professionals to the “Spirit of Nassau and Paradise Island,” the event was held at the Embassy of The Bahamas, 2220 Massachusetts Avenue, N.W., and featured an evening of fun, Bahamian food and dancing organized by THINGS TO DO D.C., which describes itself as “the premier social and networking organization for young professionals.” Similar events are periodically sponsored by the organization at various Embassies in Washington, D.C.

Approximately 100 guests were welcomed by Dr. Eugene Newry, Ambassador to the United States and Mexico, and Director General in the Ministry of Foreign Affairs and Immigration, Mrs Sharon Brennen-Haylock,  who both reminded the young professionals present that The Bahamas has one of the closest relations with the United States of any country and  invited them to consider visiting The Bahamas to experience its unrivaled hospitality first-hand.

Guests dined on traditional Caribbean cuisine, including such Bahamian staples as peas and rice, fried plantain and conch fritters and the traditional Jamaican dish curried chicken along with an assortment of deserts. Caribbean dance music was provided by Ryan Browne (DJ PUMPKIN).

The THINGS TO DO D.C. website claims that it has “an active membership of over 175,000 local young professionals” and it “produces original events that enrich your social and cultural experiences while enabling you to meet other young professionals in a friendly environment.”

“Our primary goal is to help enrich the personal and professional lives of professionals of all ages,” the website states. “We accomplish this by producing a wide variety of interactive social, educational, and cultural events that encourage our members to learn new things and meet new people. We are quite proud of what we have built in the past and are continuing to build. With your continued participation, Things To Do® will remain the consummate organization for Washington’s young professional population.”

CAPTION ONE
Pictured from left to right at the social event sponsored by THINGS TO DO DC at The  Bahamas Embassy Friday evening are: Mrs. Sharon Brennen-Haylock, Director General of the Ministry of Foreign Affairs and Immigration; one  of the guests; His Excellency Dr. Eugene Newry, Bahamas Ambassador to the United States; Mrs. Francoise Torchon Newry, the Ambassador’s wife; and Mr. Mikhail Bullard, Second Secretary, Bahamas Embassy. 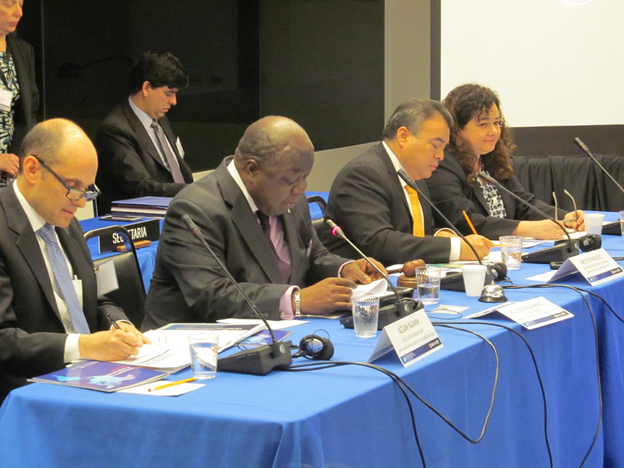 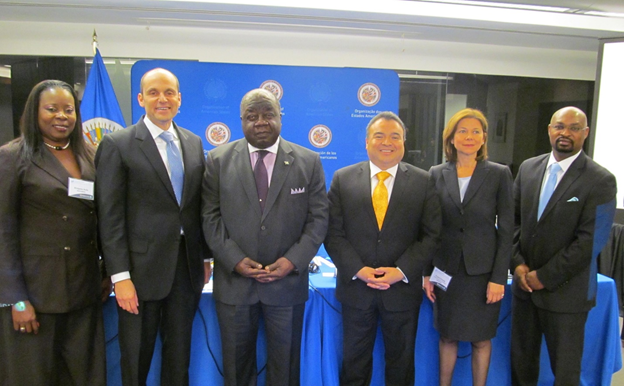 WASHINGTON, D.C., USA – The Bahamas remains committed to supporting the work of the Organization of American States (OAS) in identifying effective ways in which to address the world drug problem, Dr. Elliston Rahming, Bahamas Ambassador to the United Nations and Permanent Representative to the Organization of American States (OAS), said on Monday.

Delivering the opening address at the 61st Regular Session of the Inter-American Drug Abuse Control Commission (CICAD), April 24, 2017, at the OAS General Secretariat Building, 1889 F Street, N.W., Ambassador Rahming told a packed room of delegates that the Government of The Bahamas remains “actively engaged” with international drug control bodies such as the United Nations Commission on Narcotic Drugs (UNCND) and CICAD in addressing the global drug problem and that the country has established a National Anti-Drug Strategy (2012-2016) that provides a comprehensive, integrated approach aimed at countering the drug problem from a national standpoint in The Bahamas.

The Bahamas serves as Chair of the 61st CICAD Regular Session having ascended to the Chair during the 60th Regular Session held in Nassau in 2016. Delegates were applauded by OAS Assistant Secretary-General, His Excellency Nestor Mendez for the large turnout, who noted that the turnout reflected the commitment of Member States to effectively addressing the world drug problem.

“Since ascending to the chairmanship of CICAD, The Bahamas has continued to support and to collaborate with Member States in countering the hemispheric illegal drug trade,” Ambassador Rahming said.

“We look forward to continued engagement with the CICAD Executive Secretariat and are committed to supporting the work of the OAS in identifying effective ways in which to address the world drug problem.”

Ambassador Rahming reminded delegates that the OAS Secretary-General (Mr. Luis Almagro), in his remarks during the 60th Regular Session of CICAD held in Nassau and in recognition of the 30th Anniversary of the Commission, admonished that significant interventions must be taken to curb or eliminate drug trafficking in the region and that all governments must partner in order to discourage drug trafficking.

Dr. Rahming continued: “Our concerted efforts toward the higher goal of winning the war against drugs should therefore serve as the basis upon which we as, Member States, design new policies, update regulatory frameworks and devise effective solutions suitable to the needs of our respective countries and the wider Western Hemisphere.

“Today, we gather as Member States of the OAS to continue ongoing dialogue on the complexity and diversity of the world drug problem, its direct and indirect effects on our societies, and national and hemispheric efforts in mitigating the negative impact of the drug trade.

“The Bahamas, in its capacity as Chair, in conjunction with the CICAD Executive Secretariat, looks forward to a productive three days of dialogue, particularly given the cross-section of drug related issues, strategies and approaches that will be presented during this 61st Regular Session.

“The Bahamas is hopeful that with the expertise shared throughout the Session, the hemisphere will be better poised in improving the effectiveness of our collective responses to the drug problem in the mutual interest of all Member States.”

Ambassador Rahming said an important outcome of the 60th Regular Session of CICAD in Nassau was the successful adoption of the Hemispheric Action Plan on Drugs 2016-2020.

“It is anticipated that this new Action Plan will chart the course of drug control efforts in our region,” he stated. 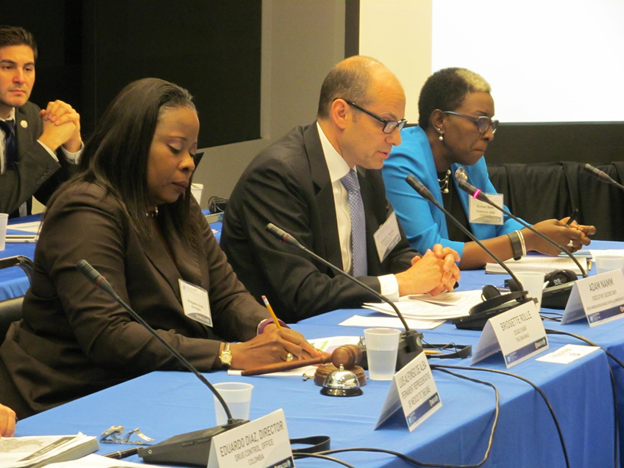 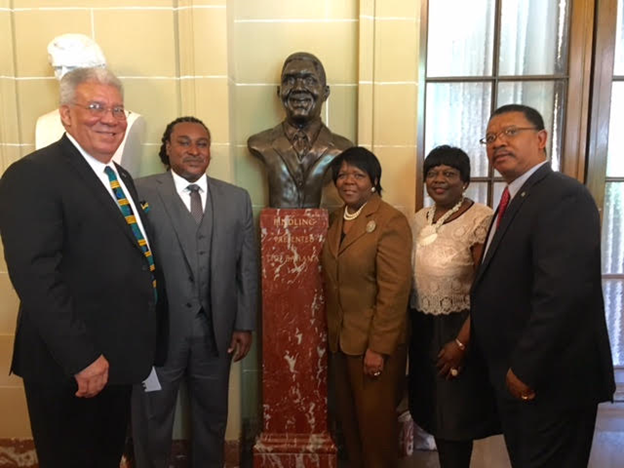 WASHINGTON, D.C. – New York was very well represented at the ceremony held in the Hall of Heroes at the Organization of American States (OAS) in Washington, D.C. for the unveiling of a memorial bust of the late Sir Lynden Pindling, the first Prime Minister of The Bahamas and Father of the Nation, on Thursday, August 20, 2017. Among those present, from left to right: Hon. Forrester Carroll, Bahamas Consul General to New York; Mr. Andret John, the Bahamian artist who sculpt the bust of Sir Lynden; Ms. Mary Sweeting, Chairman of the Bahamian-American Association of New York; and Mr. Andrew Albury, President of the Bahamian-American Association of New York. 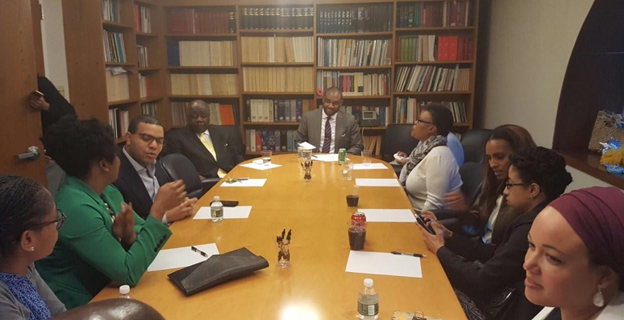 NEW YORK — The Permanent Mission of the Commonwealth of The Bahamas to the United Nations in New York on Tuesday, April 18, 2017 held its second quarterly outreach initiative, engaging members of the Bahamian diaspora from the tri-state area in another vibrant and animated roundtable discussion.

The discussion, titled “Social Challenges: The Implications for Economic and Social Advancement in The Bahamas”, was led by Attorney Rishard Cooper – a native Bahamian, a senior associate at the law firm of Hogan Lovells in New York, and a named top 40 high achiever under the age of 40 in The Bahamas.

Mr. Cooper led the lively and involved group through a conversation and interaction that touched on topics including: the need to improve the standards of the Bahamian public school system to make The Bahamas more internationally-competitive; the rise in prevalence of single-parent homes and absence of involvement by fathers, extended family and larger community; the brain drain phenomenon in The Bahamas; and more.

The stimulating dialogue invigorated participation by all, demonstrating shared experiences in many regards, while also promoting respect for diverging opinions and positions on controversial topics.

The next forum is anticipated to take place later this summer. 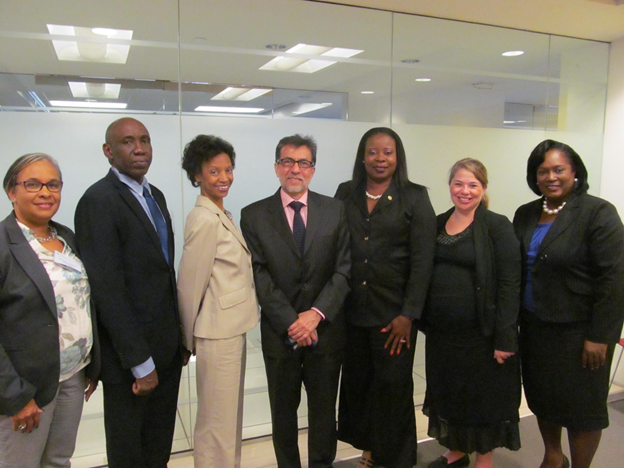 WASHINGTON, D.C. USA (BIS) April 26, 2017 – The Government of the United States of America looks forward to a “continued successful bilateral partnership” with the Government of The Commonwealth of The Bahamas, particularly in the war on the world drug problem, the Principal Deputy Assistant Secretary, U.S. State Department’s Bureau of Internal Narcotics and Law Enforcement Affairs, Mr. Luis E. Arreaga, said Wednesday.

Addressing Bahamian delegates attending the 61st Regular Session of the Inter-American Drug Abuse Control Commission (CICAD) during a Bilateral Meeting held in the General Services Building of the General Secretariat of the Organization of American States in Washington, Mr. Arreaga also congratulated The Bahamas on ascending to the Chair of CICAD and for chairing what he termed a successful 61st CICAD Regular Session.

Mr. Arreaga said the United States/Bahamas partnership has served both countries well over the years and that his country looks forward to continuing that partnership.

Mr. Arreaga said the Session also provided U.S. officials with the opportunity to share its vision for implementation of the UNGASS Document and to alert the Hemisphere of the world opioids crisis.

According to global statistics, 15million people worldwide are misusing opioids. More than five million (5.1 million) are in the United States of America.

Global health officials further say that young adults are one of the fastest growing age groups misusing prescription opioids and that males are significantly at greater risk of substance dependence than females.

Opioids are dangerous when taken other than as prescribed, and combining with other drugs compounds the risks. The new research findings highlight the importance of addressing combined drug use in interventions to prevent substance abuse in young people.

Dr. Bridgette Rolle, Head-of-Delegation, Bahamas, informed Mr. Arreaga that The Bahamas was in the process of establishing Drug Treatment Courts and Community Youth Centres as alternatives to incarceration for young drug users/abusers. Dr. Rolle also addressed a number of other areas during her response.

Just last year during the 60th CICAD Regular Session held in Nassau, Minister of National Security the Hon. Dr. Bernard J. Nottage announced that The Bahamas was in the “critical stages” of establishing Drug Treatment Courts as alternatives to incarceration for drug-dependent offenders through treatment and rehabilitation.

Dr. Nottage said Bahamian officials had also embarked upon a series of other initiatives focused on at-risk youth including the establishment of Community Youth Centres that will provide healthy alternative services and programmes.

“Participating youth will receive training in hospitality, self-esteem building, motivational and personal development,” Dr.Nottage said. “These centres will be spaces where youth can have positive interactions and hopefully be dissuaded from using illicit drugs, joining gangs, or engaging in conflict with the law.” 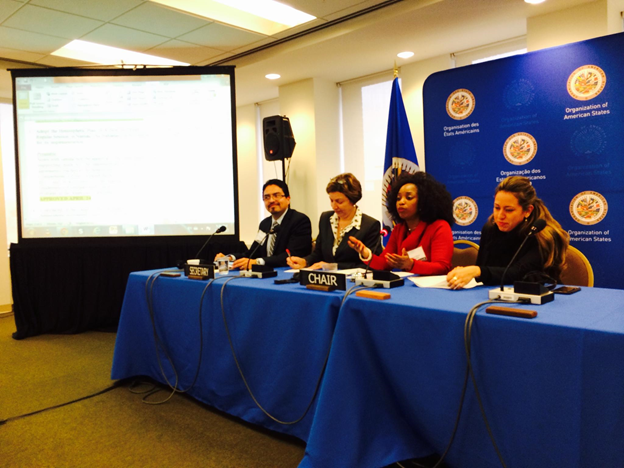 WASHINGTON, D.C. — Ms. Krissy Hanna (second from right),  Second Secretary at The Bahamas Embassy and Alternate Representative of the Permanent Mission of The Bahamas to the Organization of American States (OAS), chairs a working group session during the 61st Regular Session of the Inter-American Drug Abuse Control Commission (CICAD) held from April 24 – 26, 2017 at the General Services Building of the General Secretariat of the Organization of American States, 1889 F Street, N.W., Washington, D.C. 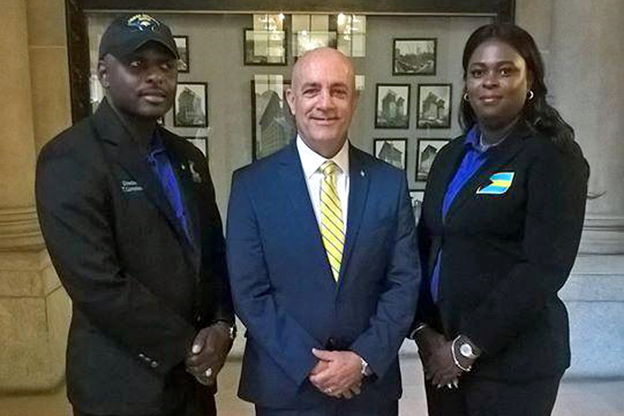 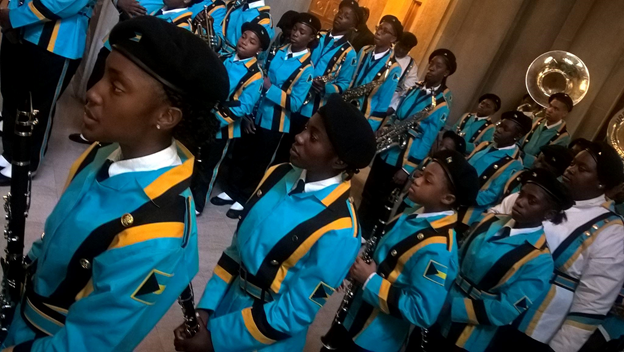 During brief remarks, Deputy Consul General Carey gave highlights about the Consulate’s role and its history and described members of the band as Ambassadors of The Bahamas, noting that they should stand tall and proud to be able to put their talents and culture on display for The Bahamas.

While in Miami the band visited Florida Memorial University in Miami Gardens, where they gave an outstanding performance of Bahamian Music.

The band is instrumental in helping students to improve their academic and musical skills and overall behavioral disposition. It includes students from the Bain Town, Centreville, Englerston East/West, Fort Charlotte, Fox Hill, Kemp Road, Nassau Village and Pinewood communities. Members range in ages from 7 to 18 and play an assortment of instruments, including trumpets, flutes, trombones, alto and tenor saxophones, sousaphones, clarinets, snare and tenor drums, hand bells and steel pans.