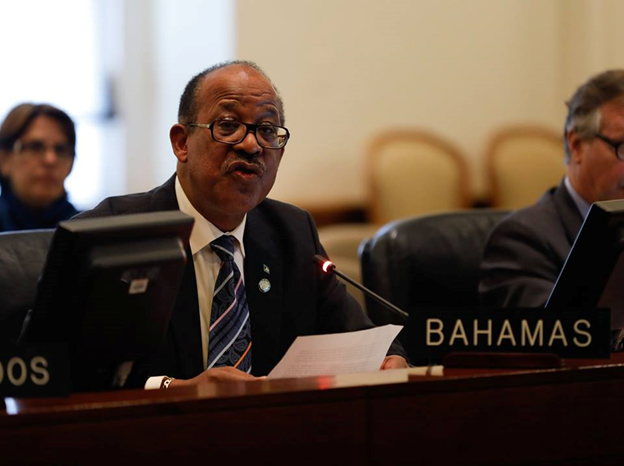 On December 20th, 2017, the Permanent Council of the Organization of American States (OAS) received a report from the OAS Department for Electoral Cooperation and Observation on the OAS mission convened to observe the general elections of The Bahamas in May 2017.

Ms. Sherry Tross, who headed the electoral observation mission, commended The Bahamas on the conduct of the elections on election day, the efforts to expand access to voting to Bahamians overseas and the high turnout of Bahamian voters on election day. The OAS report also recommended reforms to digitize the work of the Parliamentary Registration Department, to regularize the tenure of Parliamentary Registrars and to introduce campaign finance regulations.

Upon receiving the report, Permanent Representative Collie thanked the OAS for its work in electoral observation and donor countries that financed the mission in the instance of The Bahamas.

Further, Permanent Representative Collie underscored that the May 10th elections were consistent with the longstanding democratic traditions of The Bahamas, namely that they were “free and fair and were characterized by a peaceful and civil transfer of power”, and that The Bahamas nonetheless “remains on a quest to ensure that our democratic processes and each successive election exercise is more inclusive and efficient”.

Permanent Representative Collie affirmed that “The Bahamas will in earnest soberly review the report and, where deemed practical, make the necessary reforms predicated on lessons learned, international best practices and recommendations offered therein”. He also called upon the OAS to provide support for reforms that might be undertaken and to continue the valuable work of electoral observation. 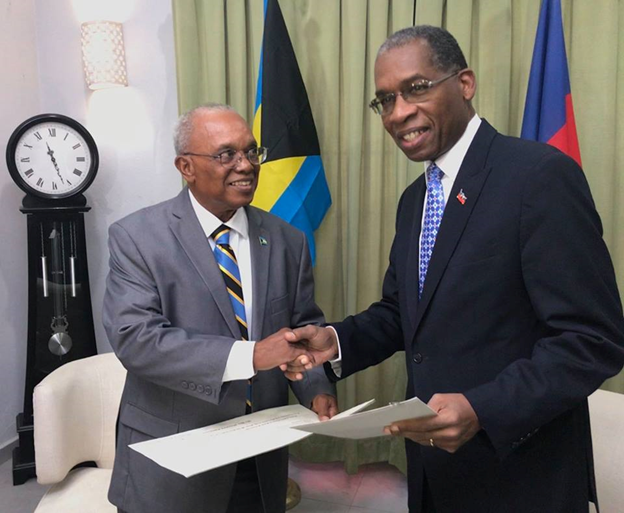 His Excellency Jeffrey Williams, Ambassador of The Bahamas to Haiti, presented his Letters of Credence to the Honourable Antonio Rodrigue, Minister of Foreign Affairs and Worship of Haiti on Tuesday, 19 December 2017 in Port-au-Prince, Haiti.

Following the presentation ceremony, Ambassador Williams and Minister Rodrigue engaged in a brief discussion and exchange of views on cooperation in the areas migration, fisheries, agriculture and investment promotion and protection.Recognizing the very close ties between the two countries, Ambassador Williams and Minister Rodrigue committed to working towards the enhancement and strengthening of that relationship.

Ambassador Jeffrey Williams will present his Credentials to the President of Haiti, JovenelMoise, in January 2018. Ambassador Williams is also the Ambassador designate to the Dominican Republic.

Ambassador Williams is pictured with the Honourable Antonio Rodrigue, Minister of Foreign Affairs and Worship of Haiti. 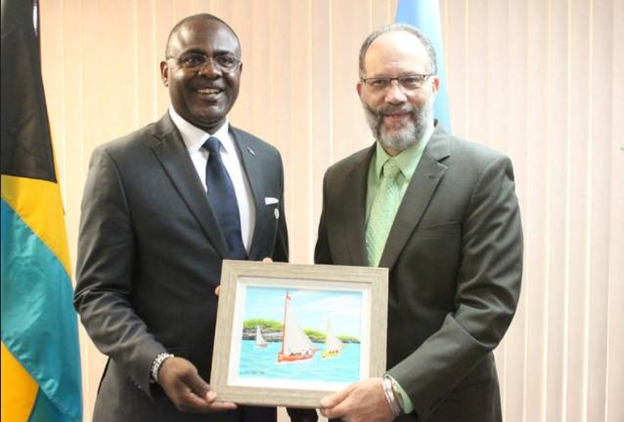 Presenting a gift to the Secretary General of Caricom on the occasion of the presentation of his letters of introduction to the SG, High Commissioner Reuben Rahming  13 December

The Regional Commission on Marijuana, established by CARICOM Heads of Government, will hold a number of focus group with Youth, Faith-based organizations and special interests groups to gather public opinion on the decriminalization of marijuana. The general public is invited to attend Town Hall Meeting on 5th January, 2018 at the Holy Trinity Activity Centre 6pm.

The region-wide consultations are intended to obtain information on the social, economic, health and legal issues related to marijuana use in the Caribbean. The information will aid in determining whether there should be a change in the current drug classification, modeled after the UN Convention on Psychotropic Substances to which many CARICOM members are party to.