“Meeting with the ambassador of The Bahamas accredited in Haiti,  Godfrey G. Rolle, around the planning of the visit to Haiti a delegation of young Bahamians in order to discover the cultural heritage of Haiti and on the participation of his country at the festival of the arts of the Caribbean (# Carifesta) next August in Haiti.” 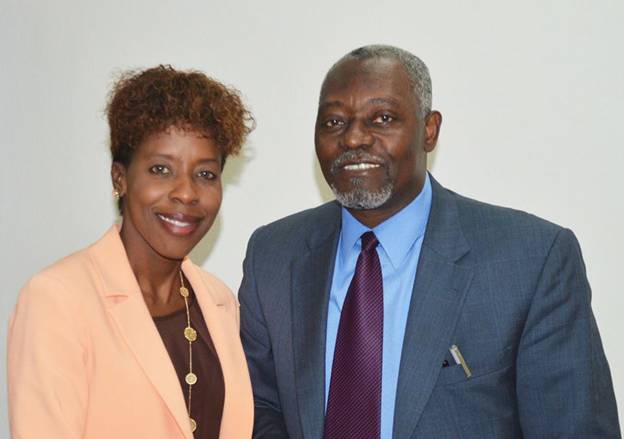 CHICAGO — Bahamas Honorary Consul to Chicago Michael C. Fountain attended the City of Chicago Inauguration Ceremony at the historic Chicago Theatre on Monday, …May 18, 2015. He was accompanied by his wife Mrs. Tanya Fountain. Honorary Consul Fountain was invited as a member of the Chicago Consular Corps to represent The Bahamas as Mayor Rahm Emanuel was sworn in for his second term along with the City Clerk, Treasurer and 50 Aldermen elected to serve Chicago’s 77 communities and 2.7 million residents. Honorary Consul Fountain continues to strengthen his relationship with the Mayor’s office to better serve the needs of Bahamian residents living in the City of Chicago and outlying areas. In the first photo Mayor Emanuel (left) is pictured being sworn in by the Hon. Timothy Evans, Chief Judge of the Circuit Court of Cook County, as Mrs. Emanuel looks on. Honorary Consul Fountain and Mrs. Fountain are pictured in the photo at right. 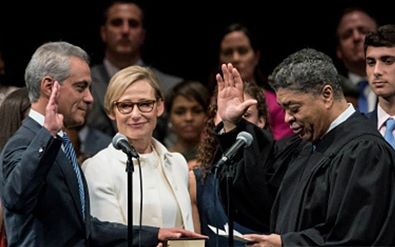 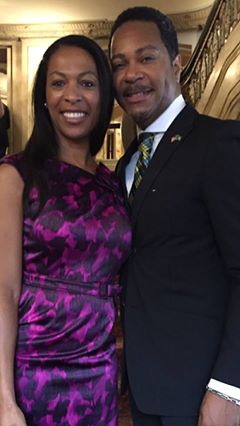 WASHINGTON, D.C. — Mrs. Idena Burrows, President of the Bahamas Communications and Public Officers Retirees Association (BCPORA), presents a gift to Mrs. Paulette Zonicle, Bahamas Consul General to Washington, D.C., during a visit by 47 members of the BCPORA to the Bahamas Embassy Consular Annex, 1025 Vermont Avenue, N.W., on Wednesday, May 20, 2015. The group is on their annual retreat trip, which also includes visits to Baltimore, Maryland, and New York City. Looking on at left is His Excellency Dr. Eugene Newry, Bahamas Ambassador to the United States, who was also presented with a gift, and in the background are Deputy Chief of Mission Chet Neymour and Ms. Faith Maycock, Third Secretary, Embassy of The Bahamas Consular Annex. 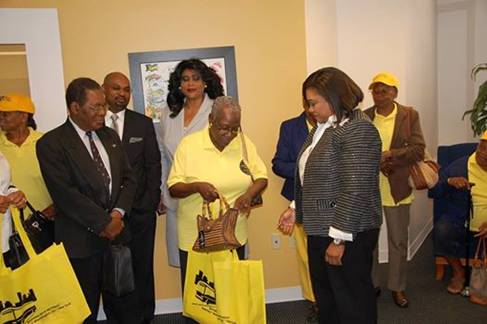 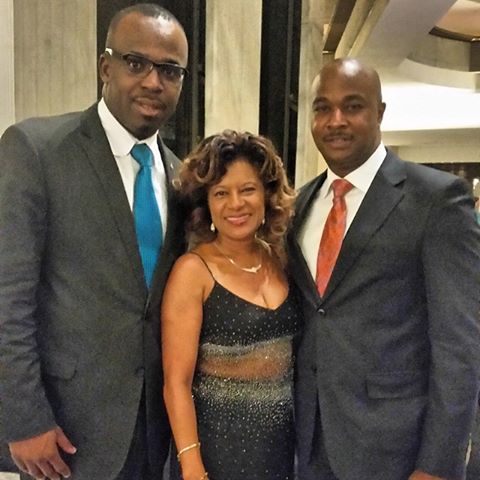 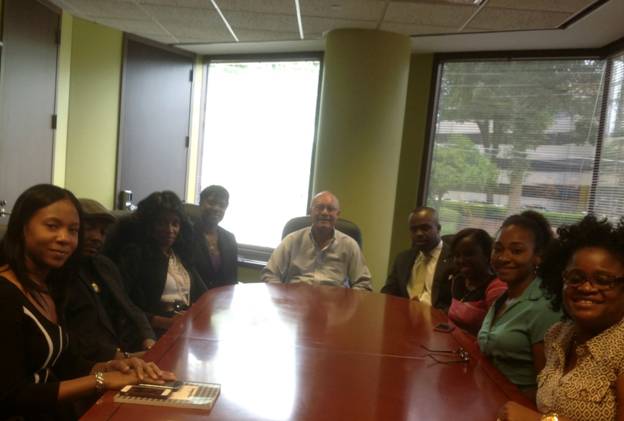 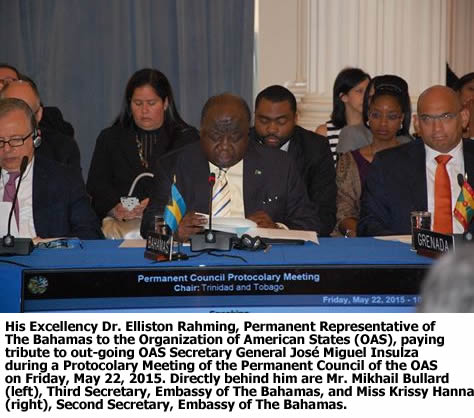 WASHINGTON, D.C. — His Excellency Dr. Elliston Rahming, Permanent Representative of The Bahamas to the Organization of American States (OAS), was among those paying tribute to OAS Secretary General José Miguel Insulza during a Protocolary Meeting of the Permanent Council of the OAS on Friday, May 22, 2015, in the Hall of the Americas at OAS headquarters on 17th Street and Constitution Avenue, NW, to bid farewell to the outgoing Secretary General.

Speaking on behalf of the CARICOM Caucus of Ambassadors, Dr. Rahming, who is also The Bahamas’ Ambassador to the United Nations, said that on “occasions such as this, I often reflect on the burdens of true leadership, the responsibility and obligations that come with executive management, the personal and professional sacrifices that often accompany authority, the thanklessness that is often all too common, particularly in respect of public service.”

“I also pause to consider the past decade and the myriad challenges that have threatened the well-being of the hemisphere and this organization,” Ambassador Rahming added. “Secretary General Insulza, certainly your decade of public service to the hemisphere has proved a testament to the mettle that is required for 21st century leadership in the global forum. You were inheritor of an OAS, and a hemisphere, that would have had to navigate uncertain times with respect to unprecedented threats against security and unforeseen economic recession.”

Dr. Rahming noted that over the course of Mr. Insulza’s decade of stewardship, the OAS “has maintained and enhanced its function as the political forum par excellence of the hemisphere and this has helped the hemisphere emerge from the past decade more secure, more united and more cooperative than before, in spite of the common challenges faced.”

“The strengthening of the focus on multidimensional security, the Secretariat’s tireless work to help defuse numerous political crises within and between member states across the Americas and the willingness to be a first mover on engaging in the necessary dialogue on intractable hemispheric issues such as the drug problem in the Americas and inequality all speak to an Organization whose relevance to our citizenry has been enhanced over the past decade,” Ambassador Rahming said. “The OAS has also been strengthened in areas of clear comparative advantage with other institutions such as electoral monitoring, facilitating economic and social technical cooperation and the provision of scholarships and inter-American training and exchange opportunities, which have all had the effect of bolstering democracy and development in the Americas. Under your watch, finally and historically, all members of the hemisphere sat around the table of the most recent Summit of the Americas, and this has been aided by your support for Cuban reintegration into the inter-American system. This must be commended.”

Declaring that Mr. Insulza “also inherited an OAS, which faced fiscal and structural challenges which threatened its viability, and required focused administrative reform,” Ambassador Rahming noted, “Your steady hands have overseen the historic development of a strategic vision for the Organization, much needed mandate prioritization and rationalization initiatives, and administrative reforms that enhance the accountability of the Secretariat to Member States and the wider public. While this process of reform is ongoing, you have certainly helped build a foundation for a more functional, effective and accountable OAS going forward.”

Ambassador Rahming added, “The CARICOM region, therefore, commends you for your stalwart decade of leadership, and the legacy of necessary reform that has characterized your tenure, the positive effects of which will reverberate throughout the hemisphere for years to come.

“Finally, now in my capacity as Permanent Representative of The Bahamas, I wish to extend the appreciation of my country for your decade of public service to the hemisphere and your penchant for robust, focused and fair-minded leadership. We are particularly pleased that this legacy has been documented for posterity and for reflection in your recently released book. Sir, The Bahamas and the region wish you every success in your future endeavors and, once again, please accept our gratitude for your decade of public service to the Americas.”

MIAMI, FLORIDA — The Hon. H. Ricardo Treco, Bahamas Consul General to Miami, paid a courtesy call on Lieutenant Governor of Florida, Carlos Lopez-Cantera to dialogue about the mutually beneficial opportunities between South Florida and The Bahamas.

Consul General Treco capitalized on the opportunity warm greetings to the governor on behalf of The Government of The Bahamas and the Bahamian Diaspora. He highlighted the great foreign relations and business development of both countries; each country plays a pivotal role by being committed to advancing the economic cooperation and trade between our two countries. 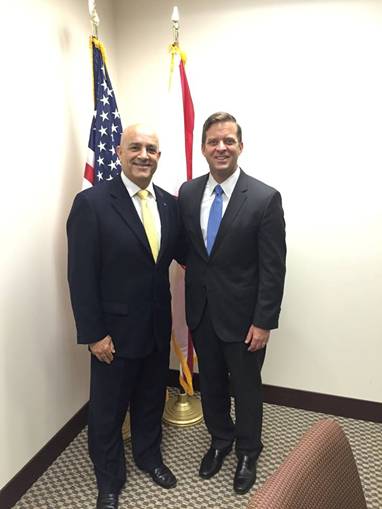 Geneva–Minister of Health, the Hon. Dr. Perry Gomez paid a brief call on The Bahamas Permanent Representative to the United Nations in Geneva, Her Excellency, Rhoda M. Jackson.  The Health Minister led The Bahamas’ delegation to the 68th World Health Assembly, held from 18 – 26 May, 2015.

Among those areas addressed at the Health Assembly were Non-Communicable Diseases, Women and Health, and Anti-Microbial Resistance.  Health Ministers also exchanged views on the matter of Health in the post-2015 development agenda, and Implementation of the International Health Regulations.

Photo shows Ambassador Rhoda M. Jackson and the Hon. Dr. Perry Gomez, Minister of Health, at courtesy call at the Office of the Bahamas Permanent Representative to the United Nations, Geneva. 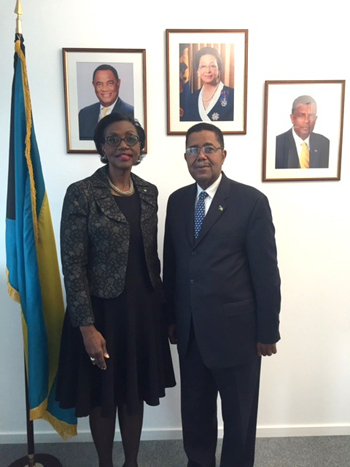