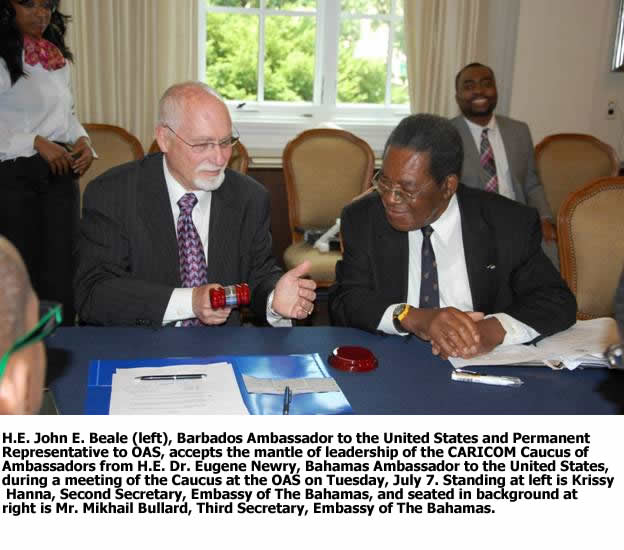 WASHINGTON, D.C.  — His Excellency Dr. Eugene Newry, Bahamas Ambassador to the United States, officially ended his six-month tenure as Chairman of the Caucus of CARICOM Ambassadors in Washington D.C. on Tuesday, July 7, at a Caucus meeting held at the Organization of American States (OAS) main building on 17th Street, N.W.

Dr. Newry passed the gavel, the symbol of leadership of the 14-member group, to H.E. John E. Beale, Barbados Ambassador to the United States and Permanent Representative to OAS, who will serve as Chairman for the next six months, in alignment with Barbados Prime Minister Freundel Stuart serving as Chairman of CARICOM until the end of 2015.

Dr. Newry’s term as Chairman coincided with Bahamas Prime Minister Perry Christie’s assumption of the Chairmanship of CARICOM in January for the first six months of 2015. The Bahamas actually ascended into Chairmanship one month earlier, due to Antigua and Barbuda relinquishing it in December.

Prime Minister Christie officially turned over the Chairmanship of CARICOM to Barbados Prime Minister Stuart at the opening ceremony for the Thirty-Sixth Regular Meeting of the Conference of Heads of Government of CARICOM in Bridgetown, Barbados, on July 2.

In brief remarks prior to handing over the mantle of leadership of the CARICOM Caucus, Ambassador Newry thanked his colleague Ambassadors for the opportunity to serve as Chairman of the Caucus for the past six months.

ATLANTA — Consul General Randy Rolle and Consul Monique Vanderpool marking the support of Popeye’s for the Bahamian Independence celebrations in Atlanta. Next to Ms. Vanderpool is Eddie Archer, General Manager for Bahamas Tourism in Atlanta with Tim Waddell and Ron Whitt of Popeye’s 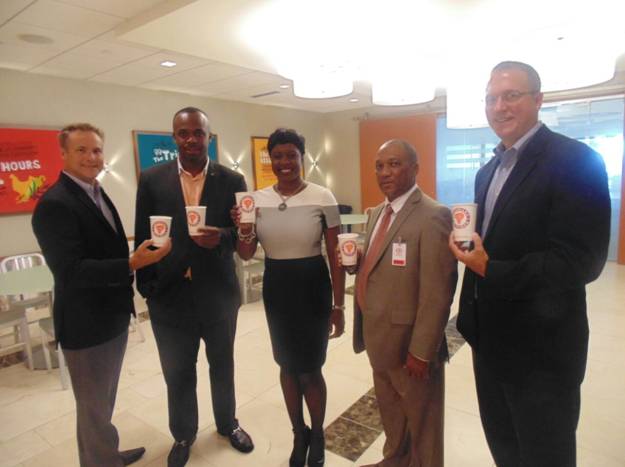 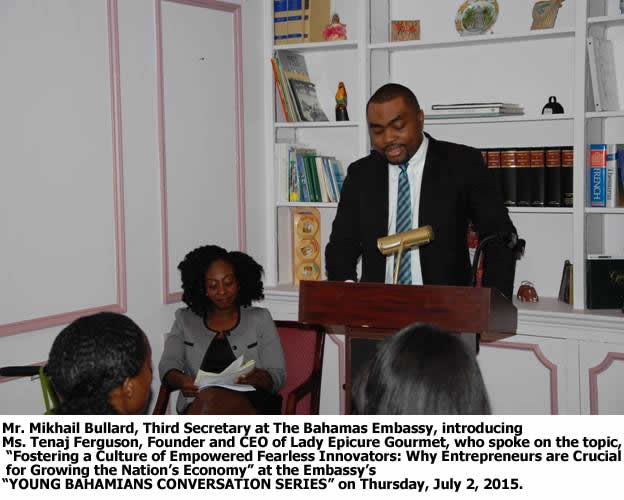 WASHINGTON, D.C. — The Embassy of The Bahamas in Washington, D.C., continued its “YOUNG BAHAMIANS CONVERSATION SERIES”  Thursday evening, July 2, 2015, at the Embassy, 2220 Massachusetts Avenue, N.W., with a presentation by Ms. Tenaj Ferguson, Founder and CEO of Lady Epicure Gourmet, who spoke on the topic, “Fostering a Culture of Empowered Fearless Innovators: Why Entrepreneurs are Crucial for Growing the Nation’s Economy.”

The “YOUNG BAHAMIANS CONVERSATION SERIES” is an initiative aimed at providing a forum for young Bahamians in the diaspora in the Washington, D.C. area “to present and dialogue on their research or work and cultivate ideas for the betterment of The Bahamas.”

It is being presented under the patronage of His Excellency Dr. Eugene Newry, Bahamas Ambassador to the United States, who delivered welcoming remarks.

Ms. Ferguson’s presentation followed a highly impressive presentation on June 12 by Ms. Aisha Bowe, CEO and Founder of STEMBoard, a 29-year-old Bahamian aerospace engineer, who has worked as a researcher at the NASA Ames Research Center.

Ms. Ferguson, who was introduced by Mr. Mikhail Bullard, Third Secretary at The Bahamas Embassy, delivered a more than one-hour highly informative address on her topic.

According to its website, Lady Epicure, established by Ms. Ferguson in October 2013, is “a gourmet treats line specializing in frozen bars” that is “committed to creating natural and organic products with striking tastes to redefine the traditional cold treat.”

Ms. Ferguson holds a Master of Business Administration degree, with concentrations in Brand and Product Management, Innovation Leadership and Entrepreneurship, from the University of Texas at Austin McCombs School of Business, and is also a graduate of the University of Richmond School of Arts & Sciences, from where she obtained a Bachelor of Arts in Psychology.

CHICAGO, Illinois — Bahamas Honorary Consul to Chicago Michael C. Fountain (second from right in back row) attended the 23rd Annual Caribbean International Festival of Life with visiting and local Bahamians on July 4, 2015. As a contributing sponsor, the Bahamas Consulate Chicago was asked to participate in the event’s Carnival of Nations, where Honorary Consul Fountain gave remarks regarding the celebration of Bahamian Independence and asked local Bahamians to register with his office. The Caribbean International Festival of Life was founded as a vehicle to bring nations together promoting arts and humanities as well as providing a platform for people of the United States, Caribbean and Africa to connect through music, arts and crafts, clothing, traditional food and cultural exchange. 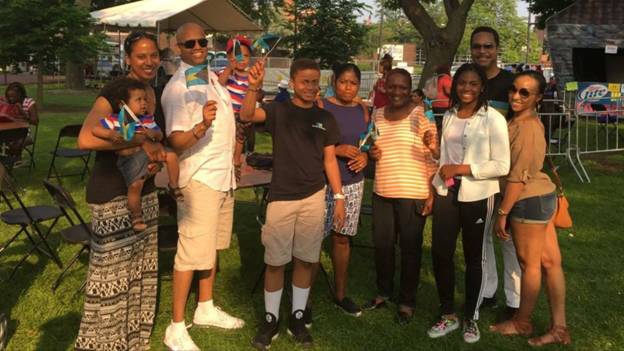 GENEVEA —The Bahamas participates in the Final Preparatory Meeting for Arms Trade Treaty, 6-8 July, 2015, Geneva, Switzerland
Ambassador Rhoda M. Jackson, Bahamas’ Ambassador to the United Nations Office in Geneva, led The Bahamas’ delegation to the Final Preparatory Meeting leading up to the First Conference of States Parties scheduled to be held in Mexico in August, 2015.

The Arms Trade Treaty is designed to combat and control the illicit use of small arms and light weapons. The Final Preparatory Meeting is considering questions pertaining to the financial regulations, rules of procedure, reporting obligations, the Secretariat staffing and its location.

The Bahamas deposited its instrument of ratification to the Arms Trade Treaty on 25 September, 2014, being among the first 50 countries to ratify the treaty. 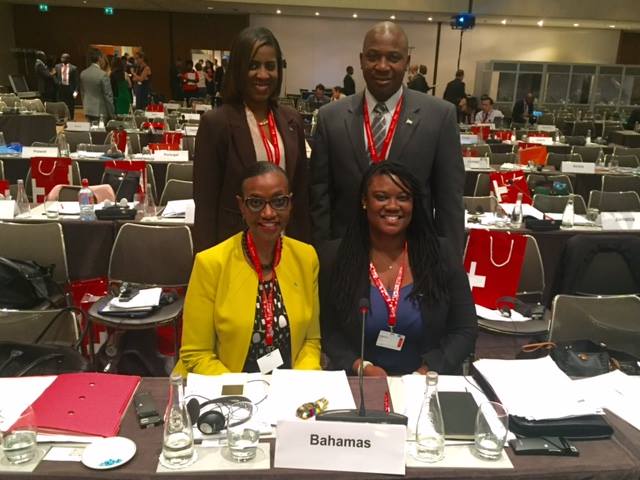