cialis sale advice times;”>LOS ANGELES — Honorary Consul of The Bahamas to California Cedric A. Scott (left) and Sir Sidney Poitier, pharmacy the iconic internationally acclaimed Bahamian actor, are pictured after having lunch at the Four Seasons Hotel in Beverly Hills. At center is Ms. Anolan Dragitch, presenter/producer for Luxe World-TV. 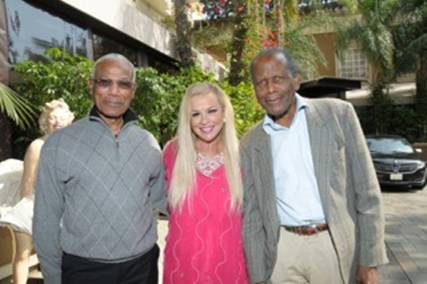 LOS ANGELES, August 3, 2015 — Honorary Consul of The Bahamas to California Cedric A. Scott welcomed The Bahamas’ Special Olympics athletes, their coaches, chaperones and area Bahamian expatriates to an afternoon reception at The Annenberg House on the campus of the University of Southern California on Monday, July 17.

In the warm early Los Angeles evening, with light refreshments and drinks, local Bahamians came and met with the Olympians to show their encouragement, support and pride. A relaxed and enjoyable time was had by all.

In welcoming the Olympians, Honorary Consul Scott stated, “It gives me great pride to welcome our special Bahamian athletes to Los Angeles. I know how hard you have worked to get to this level of competition, I congratulate and applaud you. Your coaches, led by Dr. Keir Miller, support staff and chaperones also must be commended for their efforts to train, support and help these athletes to represent The Bahamas with pride. Remember that for us, you are all gold medalists. We wish you every success and celebrate with you all of your efforts.”

On the first day of competition, the Bahamian swimmers were off to a good start. Medals were won by several of the athletes in swimming. Cornel McClain won both gold and silver medals and Lavontae Clark won a silver. Two other swimmers, Serena Newton and Deron Forbes, won silver and bronze medals respectively.

In track and field on Thursday, July 30, Danier Rolle struck gold in the standing long jump (male); Krystal Clarke got silver in the standing long jump (female); Mario Nottage secured a bronze medal in the men’s 800m; Brenville Dorsett received a 5th place finish in the 800m. In bocce singles, Colette Grant won the gold medal in her division and Tammicka Laing won the silver medal in her division.

On Friday, July 31, it seems like GOLD was the preferred colour of the day for Team Bahamas. Deangelo Bullard won his nail-biting singles division with a 521 pinfall to snatch the Gold medal from Singapore by a mere 2 pin margin; Danier Rolle also picked up a gold medal in the softball throw, to go along with his silver medal, which he earned a couple hours earlier in the 100m walk; and Krystal Clarke also won gold in the 100m walk for females. Other results for the day included a 4th place finish for Zekuumba Major in his tennis singles and a 6th place finish for Amal Johnson in the 100m.

The Special Olympics World Summer Games was held in Los Angeles from July 23 to August 2, with an official opening on July 25. It featured competitions in aquatics, gymnastics, track and field, basketball, football (soccer) and many other summer sports involving 6,500 athletes with intellectual disabilities from around the world.

Bahamians in the diaspora can contact Honorary Consul Cedric Scott at
e-mail: HonConsul.Bahamas@gmail.com or via Facebook: The Bahamas Honorary Consul, California.