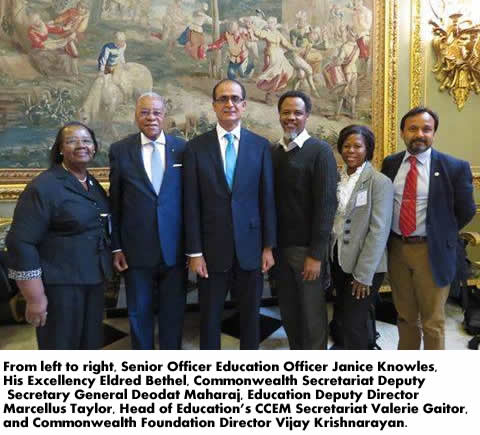 cialis sale cialis times;”>LONDON, viagra canada online England –advice times;”> Officials from the Commonwealth Secretariat, The Bahamas High Commission London and The Bahamas Ministry of Education held a post meeting to evaluate the outcomes of The 19th Commonwealth Conference of Education Minister’s meeting held in Nassau this past June.

The London branch of the steering committee and Commonwealth countries represented at the diplomatic level sung the praises of The Bahamas in hosting a successful conference; from hospitality to on-the-ground organization.

Some fifty-three Commonwealth Education Ministers, senior officials and stakeholders traveled to The Bahamas in June this year for The 19th CCEM. The conference is the second largest Commonwealth meeting after the Heads of Government Meeting, CHOGM.

The post meeting, held at the Commonwealth Secretariat’s headquarters, Marlborough House, covered various outcomes including on-going recommendations that advocate for member countries to provide free quality basic education and opportunities for all youth and adults to develop knowledge, skills and attitudes to participate fully in society and secure decent work.

The forum facilitated Education Ministers as they discuss critical and problematic issues impacting member countries, from a regional and global perspective.

The 20th CCEM will be hosted by the Fiji Islands.

“As The Bahamas hands over the mantle to His Excellency Solo Mara, High Commissioner of Fiji, host of the 20th CCEM in 2018, I wish to emphasise that we attach great significance to our membership of the Commonwealth and to the guiding principles of democracy and good governance. The Bahamas stands ready to offer any advice or guidance Fiji may require as you plan the 20th CCEM in your country. We would be happy to see Fiji build on the many innovations implemented at the Nassau Conference, such as the Regional Caucus of Ministers, the High Commissioners Forum and the Small State forum,” said High Commissioner Bethel. 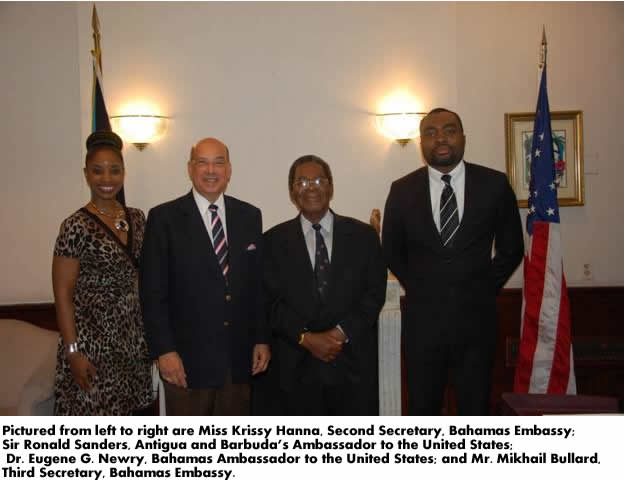 WASHINGTON, D.C. —  H.E. Sir Ronald Sanders, newly appointed Ambassador of Antigua
and Barbuda, paid a courtesy call on H.E.
Eugene G. Newry, Ambassador of The Bahamas, at the Embassy of The Bahamas in Washington, D.C., on Thursday, August 20, 2015. 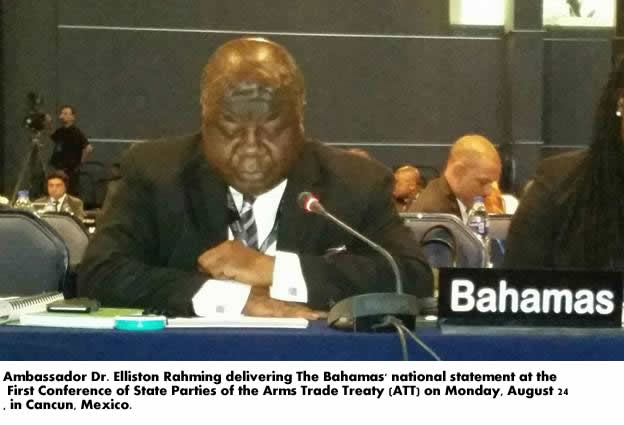 CANCUN, Mexico — His Excellency Dr. Elliston Rahming, Bahamas Ambassador to the United Nations and Permanent Representative to the Organization of American States (OAS), delivered is The Bahamas’ national statement at the First Conference of State Parties of the Arms Trade Treaty (ATT) on Monday, August 24, 2015, in Cancun, Mexico.

The ATT seeks to establish the highest international standards to prevent guns and other weapons from being used by criminals or for other illegal purposes.

Accompanying Ambassador Rahming to the conference, which is being held through August 27, are Miss Joy A. Newbold, Second Secretary and Disarmament Control Expert at The Bahamas Mission to the United Nations; Assistant Superintendents of Police Mr. Damian Robinson and Mr. Adrian Strachan, both assigned to the Ministry of National Security; and Miss Ieshia Deveaux, Administrative and Foreign Service Officer in the Ministry of Foreign Affairs and Immigration.

Following is the full text of Ambassador Rahming’s statement:

Excellencies, Ladies and Gentlemen,
On September 25, 2014, The Bahamas stood proudly with seven (7) other States to trigger the entry into force of the Arms Trade Treaty on December 24, 2014.

By making our contribution towards the fifty (50) ratifications required for the entry into force of the ATT, The Bahamas officially and openly demonstrated its commitment towards fostering peace and security by strengthening the control of weapons transfer.

The constraints of The Bahamas, while many, and notable, are not a deterrent to the efforts of the Government of The Bahamas to tackle the issue of small arms, light weapons, and ammunition trafficking.  To this end, a formal Inter-Agency Working Group was appointed in February, 2015, to coordinate policy initiatives relative to the ATT; oversee its implementation and generate reports. Further steps being undertaken include training for the Inter-Agency Working Group, in terms of seeking to address the reporting aspect and the update of the regulatory framework of The Bahamas.

In pursuit of the full implementation of the Treaty, The Bahamas will continue to draw on the expertise of technical assistance programmes to develop and undergird local programmes as well as deepen collaboration with the regional and international community for the cross exchange of best practices that would be beneficial to the interests of The Bahamas.

The Bahamas reaffirms its endorsement of Trinidad and Tobago, as the seat of the Secretariat for the ATT.  Key to this endorsement has been the influential role that CARICOM States have played toward the ATT process. CARICOM States do not manufacture weapons. We import modest volumes of conventional arms, however we are acutely cognizant of the profoundly negative social and economic impact that an unabated proliferation of small arms and light weapons have had and continues to have on our respective communities.

As the driving force behind the implementation of the ATT and considering what is at stake for the Region most notably drug trafficking and its resultant criminal activities, the Secretariat of ATT would be well placed in the Region.

We anticipate, Mr. Chairman, that the ATT will address, in a systematic manner, the issue of diversion of small arms, light weapons and ammunition through the establishment of international standards and regulations that harmonize international trade in conventional arms.

We also expect, that as a result of what we do this week, we can encourage partnerships, through ongoing dialogue, exchanges and cooperation.

The Bahamas considers this First Conference of States Parties of the Arms Trade Treaty, a landmark accomplishment of the United Nations and this week´s event will undoubtedly contribute not only to peace and security in The Bahamas, but it will also ensure a higher level of safety and security for mankind everywhere.

CANCUN, Mexico, Aug. 26, 2015 — His Excellency Dr. Elliston Rahming, Bahamas Ambassador to the United Nations and Permanent Representative to the Organization of American States (OAS), casts The Bahamas’ vote for the seat of the Arms Trade Treaty (ATT) Secretariat at the historic First Conference of State Parties currently being held in Cancun, Mexico. The conference opened on Monday, August 24, 2015, when Dr. Rahming delivered The Bahamas’ national statement, and will close on Thursday, August 27. More than 100 countries are represented at the conference. 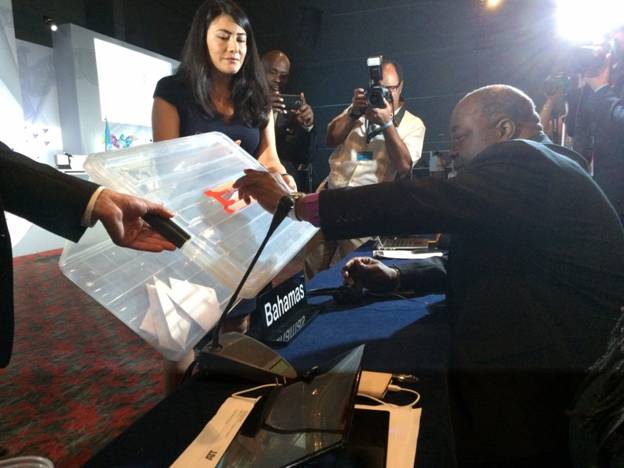 LOS ANGELES, California — Bahamas Honorary Consul to California Cedric A. Scott (left) is pictured having lunch at the Mandarin in West Hollywood with Ms Aryana Roberts (right) and Mr. Derek Palacious, who were visiting Los Angeles last week. Miss Roberts, daughter of Terrance and Lavender Roberts of Freeport, Grand Bahama, is a young filmmaker who recently graduated from Full Sail University in Orlando, Florida. She travelled to Los Angeles to establish relationships and explore film-making opportunities.  Mr. Palacious is a Bahamian fashion model. 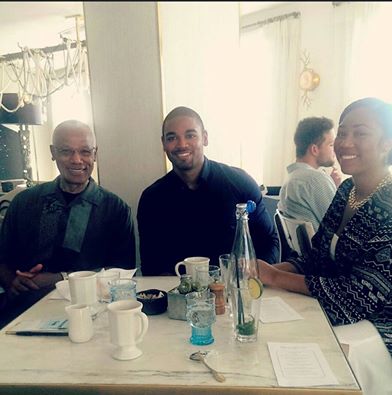