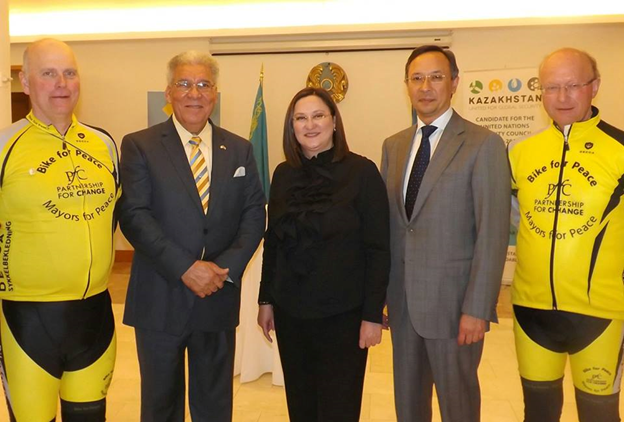 NEW YORK: The Hon. Forrester J. Carroll, Bahamas Consul General to New York, attended an exhibition on Friday, April 24, 2015, at the Kazakhstan Mission to the United Nations. Entitled “ATOM PROJECT: Abolish Testing Our Mission,” the exhibition was hosted by Ambassador Kairat Abdrakhmanov, Permanent Representative of Kazakhstan to the United Nations. It was organized by armless Kazakh painter Karipbek Kuyukov, Honorary Ambassador of the ATOM Project and Nuclear Tests survivor, and held in conjunction with “BIKE AWAY THE ATOMIC BOMB” to commemorate the final part of the “Washington DC – New York” bike ride event, devoted to raising awareness of the horrors and dangers of nuclear weapons testing, organized by “THE ATOM Project”, “Mayors for Peace” and “Bike for Peace.” Pictured from left are Mr. Svein Arne Jerstad, Mayor of Kvinesdal, Norway; Consul General Carroll; Ms. Raushan Yesbulatova, Consul General of Kazakhstan to New York; Ambassador Abdrakhmanov; and Mr. Thore Vestby, Vice President, Mayors for Peace. 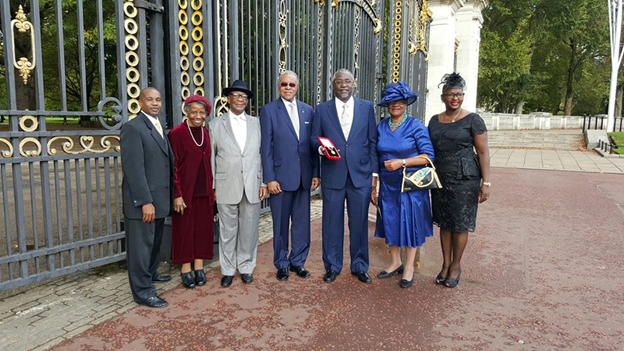 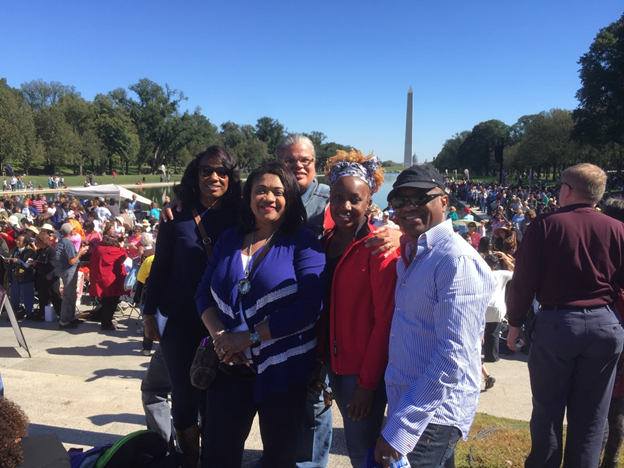 WASHINGTON, D.C. — Mrs. Paulette Zonicle, Bahamas Consul General to Washington, D.C., attended the Columbus Day Washington Prayer Gathering on Monday, October 12, 2015 at the steps of the Lincoln Memorial.  The Washington Prayer Gathering brought together more than 300 Christian churches in the Tri-State area to seek God’s guidance and to pray for the region. First Baptist Church of Glenarden, the Consul General’s church, was one of the churches that participated in this community effort. In the top photo, the Consul General is pictured with several members of the Embassy of the Bahamas Consular Annex staff. From left to right are Mrs. Ken Tucker, Consul General Zonicle, Mrs. Harrison, Ms. Rahming, and Mr. Ken Tucker, a Bahamian author, life coach and leadership expert. 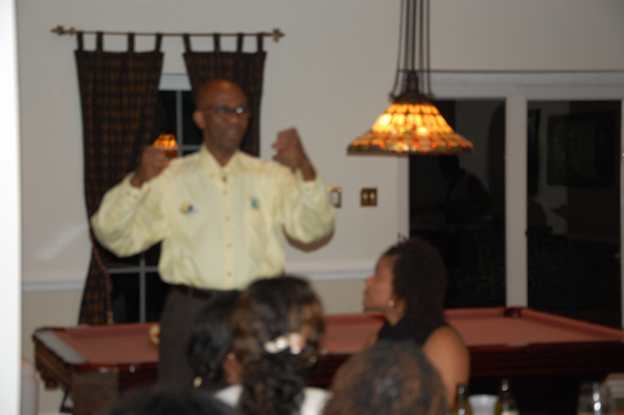 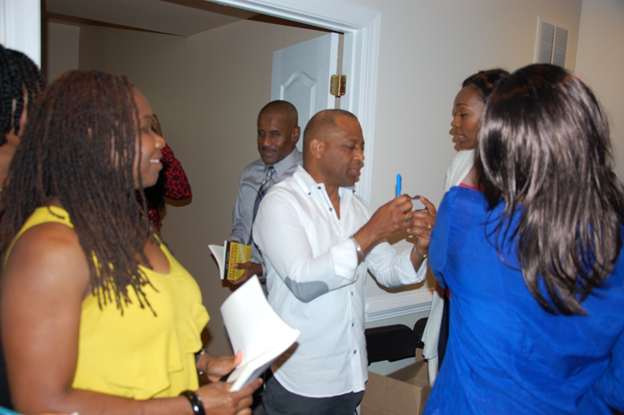 WASHINGTON, D.C. — The “Fall College Forum and Dinner” hosted by Mrs. Paulette Zonicle, Bahamas Consul General to Washington, D.C., at her residence in Fort Washington Maryland, on Friday night, October 9, 2015, for Bahamian college and university students in the Washington, D.C. area who recently returned for the fall semester also featured two guest speakers, Dr. Lincoln Marshall, a Bahamian professor at the University of Missouri, and Mr. Ken Tucker, a Bahamian author, life coach and leadership expert. Dr. Marshall is pictured addressing the group in the top photo and Mr. Tucker is seen signing copies of one of his books in photo number two. 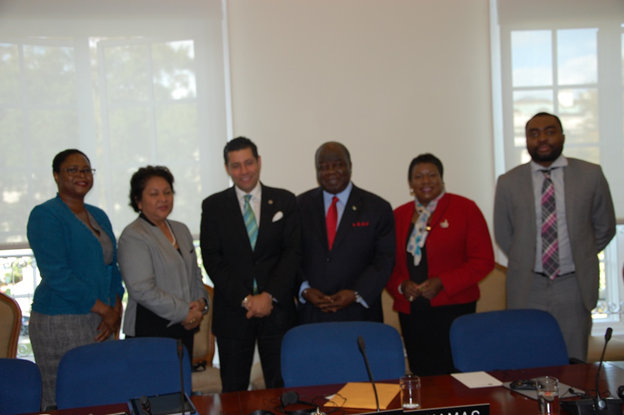 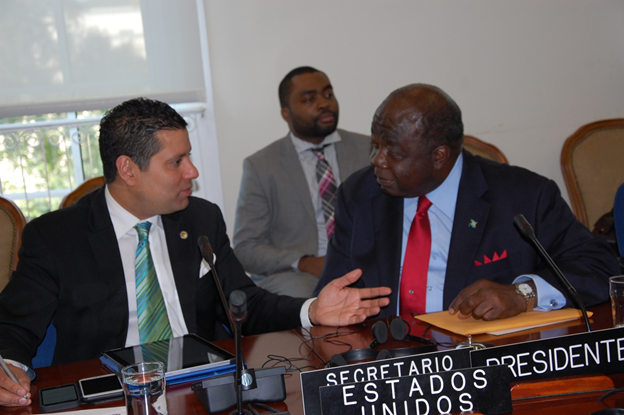 WASHINGTON, D.C. — The Bahamas, represented by His Excellency Dr. Elliston Rahming, Ambassador to the United Nations and the Organization of American States (OAS), was elected Chair of the Committee of the Capital Fund for the OAS Scholarship and Training Programs during a meeting at the OAS on Wednesday, October 14, 2015.

The Bahamas’ nomination was moved by Ecuador and seconded by the United States. The Committee is tasked with managing, investing, mobilizing resources for and identifying potential uses for the Capital Fund for the OAS Scholarship and Training Programs.

The use of the Fund is confined to assisting Member States with their domestic efforts in pursuit of integral development goals by supporting human resource development in the priority areas established by the Strategic Plan for Partnership for Development of the Inter-American Council for Integral Development (CIDI) in response to the Summits of the Americas and the General Assembly of the Organization.

The six-member Committee is composed of The Bahamas, Brazil, Ecuador, Haiti, the United States and the OAS Executive Secretary for Integral Development, Ambassador Neil Parsan, who serves as an ex-officio member.

Election to Chair of the Committee is aligned with the Bahamas Permanent Mission’s goals to engage more intently with fiscal administrative matters at the OAS and help advance the OAS comparative advantage in the area of human development.

Ambassador Neil Parsan (left), Executive Secretary for Integral Development, conversing with Dr. Elliston Rahming, Bahamas Ambassador to the OAS and United Nations, at a meeting held at the OAS on Wednesday, October 14, when The Bahamas was elected Chair of the Committee of the Capital Fund for the OAS Scholarship and Training Programs. Pictured in the background is Mikhail Bullard, Third Secretary, Embassy of The Bahamas. 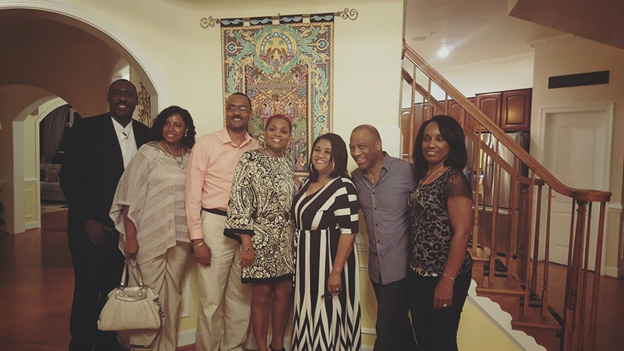 WASHINGTON, D.C. — Bahamian Author Tiffany Edgecombe recently was hosted to a dinner at the home of Bahamas Consul General to Washington, D.C. Paulette Zonicle. The occasion was in celebration of Christian Living Books Authors in the Library of Congress. Pictured from left are Mr. and Mrs. Stewart, Publishers, Christian Living Books;  Elders Adrian and Tiffany Edgecombe; Consul General Zonicle; and Mr. and Mrs. Ken Tucker.