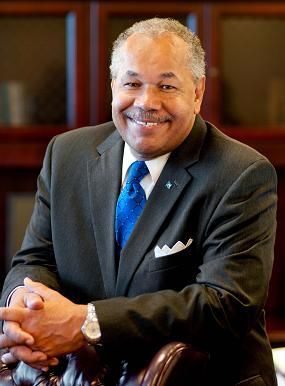 tadalafil there times;”>WASHINGTON, best cialis D.C. — Dr. Rodney Smith, President of the College of The Bahamas (COB), will head a delegation from COB on a working visit to Washington, D.C. from November 8 – 10, 2015. 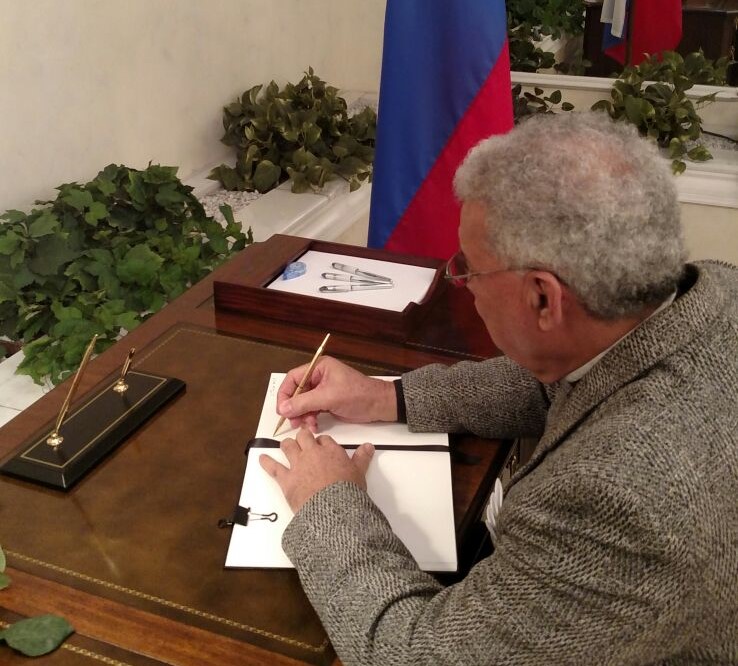 NEW YORK — Hon. Forrester J. Carroll, Bahamas Consul General to New York, signs the Book of Condolences for those who perished in the Russian plane crash in Egypt, at the Permanent Mission of the Russian Federation to the United Nations, located on 136 East 67th Street, on November 2, 2015.

The trip is being facilitated by the Embassy of The Bahamas in keeping with its ongoing mandate to support and bolster the work of Bahamian policy-makers and officials through resources and contacts in Washington D.C.

Following up on decisions made in the margins of the Seventh Summit of the Americas held in Panama City in April, where the COB President attended the 1st University Presidents Forum of the Americas, Dr. Smith and his delegation will meet with officials from the US State Department Bureau of Educational  and Cultural Affairs, the Organization of American States’ Department of Human Development and Education and several education-focused non-governmental entities.

Discussions will focus on potential technical assistance for capacity building in the areas of accreditation, internationalization and expanding online and distance education as COB transitions to a university.  The College also plans to engage on enhanced capacity-building opportunities through scholarships and exchanges for faculty.

Technical assistance and cooperation will be pursued during the visit to enhance efforts with respect to COB’s transition to a university and its enhanced role in the ongoing creation of the country’s National Development Plan.

During the working visit, President Smith will also address Bahamians in the Diaspora on “The Role of the University of The Bahamas in National Development” and make a presentation at the OAS Council on Integral Development (CIDI). 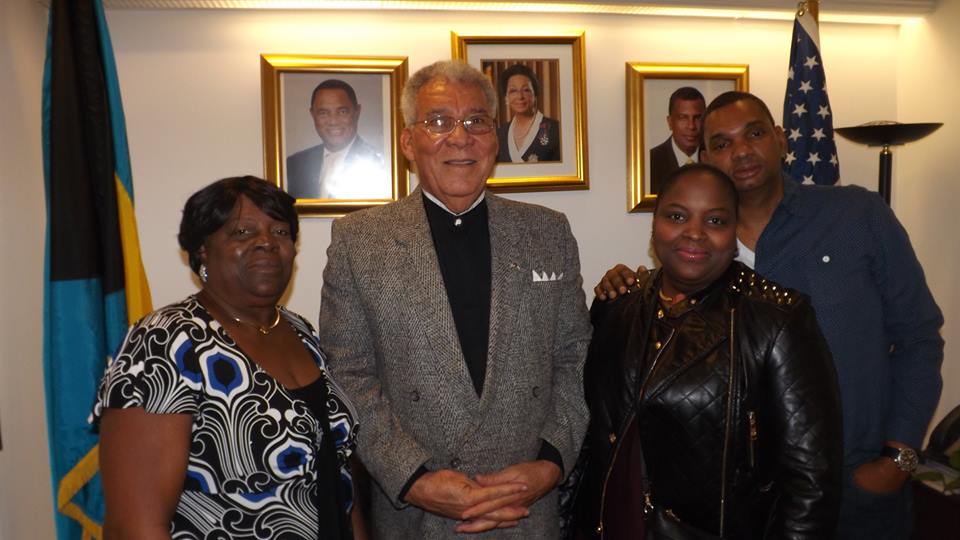 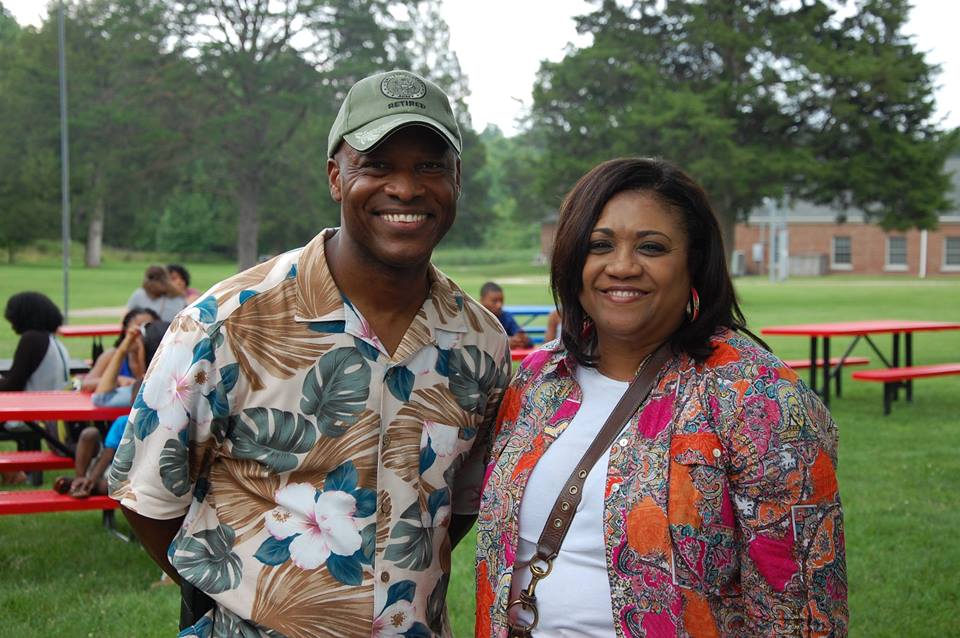 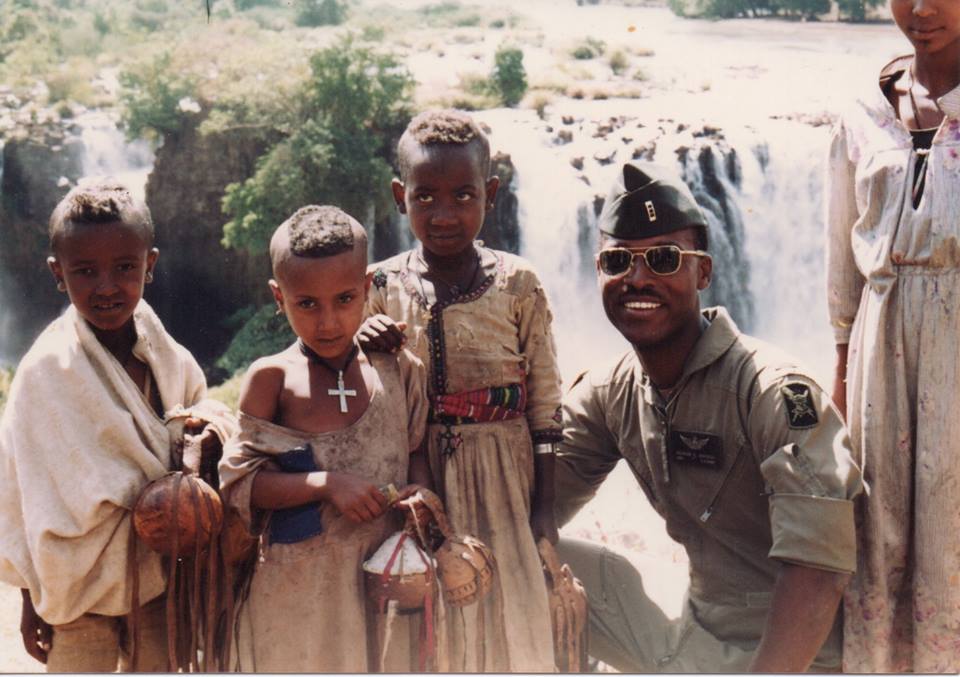 By OSWALD T. BROWN
WASHINGTON, D.C. — One of the highlights of the Bahamas independence anniversary celebrations in the Washington, D.C., area is a picnic held for the past several years on the spacious grounds of the United States Coast Guard Base in Alexandria, Virginia.

Organized by a committee headed by Mrs. Paulette Zonicle, Bahamas Consul General to Washington, D.C., the independence celebrations generally also include a reception and a church service, but the event that most Bahamians in the Washington, D.C. area diaspora really look forward to and attend in huge numbers is the picnic.

The fact that it is held on the grounds of a U.S. military establishment has nothing to with a cooperative agreement between the United States and The Bahamas, but rather because Nicanor E. Davidson and Bernard Colebrook, two of the principal organizers of the picnic, are former members of the United States Military.

Davidson, who is President of the Bahamian-American Association of the Washington Metropolitan Area, is a former U.S. Army Aviator, and he gives credit to Colebrook, a fellow Bahamian and retired United States Marine, for getting him involved in The Bahamas independence celebrations.

“I had sought to get involved in Bahamian cultural activities ever since being assigned to the DC area with the military in 1994,” Davidson said in a recent interview. “I met Bernie at a Bahamian Independence event back in the 90s and have always seen him as trying to do something to lift up The Bahamas in this area. He is absolutely tireless in these efforts.”

Davidson was born in Nassau “in a tiny house in Rupert Dean Lane, between Meadow Street and Ferguson Street, in Bain Town and attended Woodcock Primary School. At age 11, he moved with his family to Greenwich, Connecticut in 1971, and joined the US Army in September 1978, retiring officially after 21 years, on February 1, 2000.

“My first five years in the Army were as a UH-1 helicopter mechanic and crewmember,” Davidson recalls. “My remaining years were served in various capacities as a dual-rated Army aviator, flying both rotary-wing (helicopters) and fixed-wing (airplanes) platforms. My helicopter platforms were the TH-55 (Hughes 300) trainer and Bell UH-1 (Huey). My airplane platforms were the U-21 and C-12 (King Air 100 and 200, respectively) and later the C-21 (Learjet 35) and C-20 (Gulfstream III).”

Davidson received a Bachelor of Science degree in Professional Aeronautics from Embry-Riddle Aeronautical University while on active duty and after leaving the Army, he was “a commercial airline pilot for a bit over five years, serving as a crewmember, respectively on the Boeing 727, the Boeing 737 and finally McDonnell Douglas MD-80.”

“In total, I have been in aviation for approximately 37 years and have flown over 8500 hours,” he said. “I joined the Federal Aviation Administration (FAA) in October 2006, as a Transportation Industry Analyst in the Office of Rulemaking. In August of 2008, I joined the Aircraft Certification Service as an Aviation Safety Analyst, later becoming an Aviation Safety Inspector. I currently work in the Airport Compliance Division as an Airport Compliance Specialist.”

Asked why he decided to become involved with the Bahamian-American Association, Davidson said, “To the best of my knowledge, there have been numerous efforts, some more successful than others, at creating a sustained social organization for Bahamians and friends. Our efforts this time began about two years ago and we are making some headway. We wish to create a self-sustaining organization that regularly unites Bahamians and friends in the DC area for myriad social events, and also an organization that develops a great outreach potential in order to assist those in need.”

In addition to Colebrook, other key members of the association’s leadership are Khandra Sears, Darin Swain, Lincoln Marshall, and “a few others that we can always count on,” Davidson said. “With respect to the Independence celebrations we have always tried as a group to support the local offices with those celebrations as best we can. I would like to recognize Chris Gardiner in DC, who helped greatly with our initial paperwork.”

Suggesting that all Bahamians living in the Washington Metropolitan area should join the Association because “there is strength in numbers,” Davidson added, “There are people with all kinds of talents out there, and we want those people to help us make this a great organization. We have a website under construction at BAAWMA.COM. We also have an email address at BahamiamAmericanWMA@gmail.com and would love to hear from anyone who would like to help us grow the organization.”

Davidson currently lives in Alexandria, Virginia with my wife Mia. They have two adult children, Andrew (26) and Elisa (24), both college graduates.

Oswald T. Brown is the Press, Cultural Affairs and Information Manager with The Bahamas Embassy in Washington, D.C.

CAPTION ONE
Nic Davidson with Paulette Zonicle, Bahamas Consul General to Washington, D.C., at The Bahamas independence celebrations picnic held on the spacious grounds of the United States Coast Guard Base in Alexandria, Virginia, on Saturday, July 11, 2015.

CAPTION two
Nic Davidson is pictured with some children in this photo taken at Blue Nile Falls (Lake Tana) in Ethiopia Springtime 1994. He had flown an Army General from Nairobi to several locations in Ethiopia on this trip.