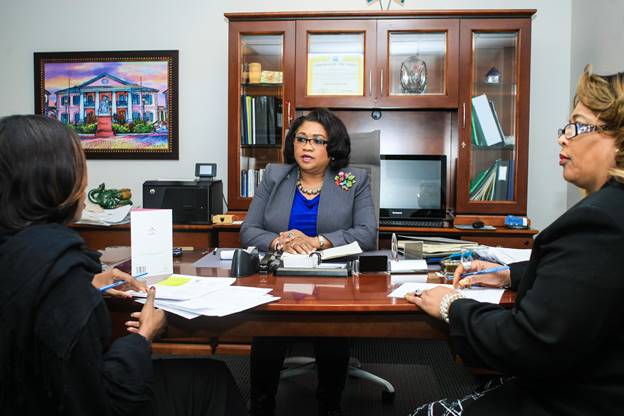 Consul General Zonicle was informed of her appointment in a letter from Katherine H. Moss, Director General of the Consular Corps College, on Wednesday, February 10, 2016.

“Over the last two years, your keen support of the CCC’s mission and work has been palpable,” Ms. Moss noted in her letter. “With your encouragement, all of your career and honorary consular officers have joined the CCC, and many have attended the Annual Symposia.  No other country is as well represented in the membership as the Bahamas.”

Ms. Moss added: “We know that you will bring that same strong commitment to your leadership.  Your energy and enthusiasm will be infectious, too.   We look forward to working with you and to continuing successes under your tenure as Dean.”

Consul General Zonicle said she was extremely pleased and honoured to have been appointed to such a prestigious position, noting that as Dean of the Consular Corps College she will have the opportunity to promote The Bahamas while helping to shape the quality of the training provided to both career Consuls and Consuls General and the Honorary Consuls and Honorary Consuls General.

The Dean also presides over the Board of Chancellors, which is comprised of the Dean, the Vice Dean, Director General, and 13 Chancellors from all across the United States, one of whom is Bahamas Honorary Consul to Chicago Michael Fountain. 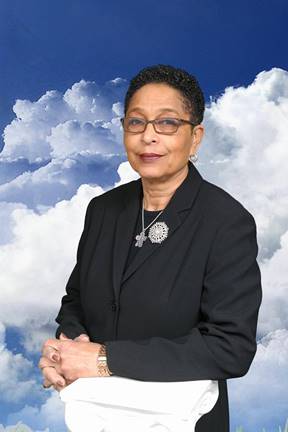 WASHINGTON, D.C. — Maria K. Sealy grew up on Shirley Street east of Mackey Street in New Providence near an area known as The Pond which produced a number of successful and industrious Bahamians in a variety of professions. Indeed, her sister, Patricia Mortimer, is one of The Bahamas’ most successful female entrepreneurs.

So it is not surprising that Maria has also successfully established herself as a business woman and is currently co-owner of Sealy Cuyler Funeral Home, LLC, located on Pacific Street between Franklin and Classon Avenues in Brooklyn, New York.

Born in Nassau, she recalls that she was very athletic. She was a member of the Bahamas National Softball team and played basketball at the Charley Major Stadium, St. Francis Grounds and Paul Adderley Gym.

Maria has been involved in funeral service for over thirty-two years, starting her career in Miami under the guidance of the legendary Anthelia Range, Funeral Director and Owner of the Range Funeral Home, the number one funeral home in southwest Florida.

Upon completing her training in Florida, Maria returned to the Bahamas. In 1989 she started her own funeral service business, and from 1989 to 1993, she was owner, manager and funeral director of the Good Shepherd Funeral Home.

In 1993 out of desire to further advance in funeral service, she relocated to the United States. From 1993 to 2005 she worked for several funeral establishments in the New York Metropolitan area.

In November of 2006, Maria teamed up with Renaye B. Cuyler to open a state-of-the-art facility built from the ground up, the first women of color to do so in the state of New York.

“This facility captures your eyes as you turn on to Pacific from Franklin Avenue as you can see the home’s green exterior beckoning to you,” Maria proudly says. “Outside it has two flags flying: The American Flag and the other flag representing the home country of the deceased (e.g. Trinidad, Guyana, Jamaica, Puerto Rico, etc).”

Since opening in 2006 Sealy Cuyler Funeral Home, LLC, has served over 500 families and has become known for providing personalized service that is tailored to the unique needs of each family. In 2008 and 2015 Maria was given Business Visionary Awards by the Caribbean American Chamber of Commerce and Industry (CACCI)

Maria is the mother of two sons, Mario and Marcian, and has five grandchildren: Mason, Kaelep, Ariel, Ashanti, Angel, and one great grandson, Jewzl.

She visits The Bahamas at least three times a year and keeps abreast of what’s happening in her country.

Asked what are her hopes and dreams for the country of your birth, she said, “I really hope that there is a decrease in crime, particularly murders, and that the Baha Mar Resort soon opens to create more job opportunities.”

Oswald T. Brown is the Press, Cultural Affairs and Information Manager with The Bahamas Embassy in Washington, D.C.

CAPTION ONE
Maria K. Sealy has established herself as a successful business woman and is currently co-owner of Sealy Cuyler Funeral Home, LLC, in Brooklyn, New York.

CAPTION TWO
Sealy Cuyler Funeral Home, LLC, is a state-of-the-art facility that comprises over 5500 square feet of interior space and over 4000 square feet of parking at the rear of the building. 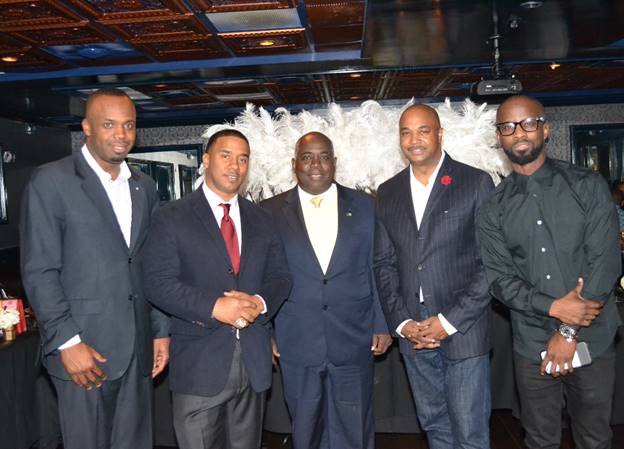 ATLANTA, Georgia — En route to Tokyo, Japan, at the invitation of the government of Japan, Deputy Prime Minister the Hon. Philip Davis had an overnight layover in Atlanta, Georgia, where he attended a reception with Bahamas Consul General to Atlanta Randy Rolle in honour of Kawan K.P. Pratjher, a producer who has been nominated for a Grammy Award. Pictured from left to right: Consul General Rolle, Kawan K.P Prather. Deputy Prime Minister Davis, Atlanta City Councilman Kwanza Hall and Producer Bryan Michael Cox, former Grammy Award winner, with roots are in Acklins and Crooked Island, who was involved in last year’s Talent and Modeling show that was promoted by Pia Rolle. 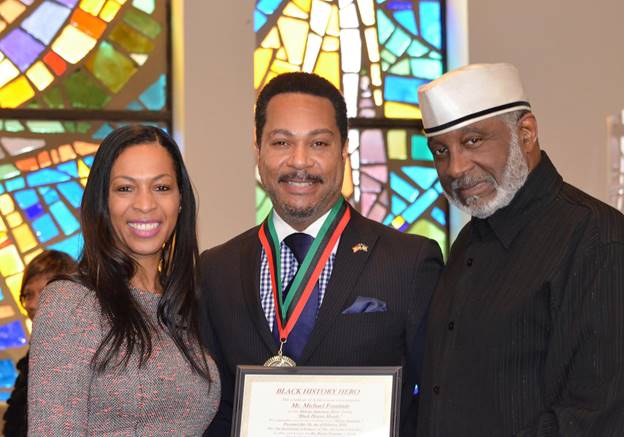 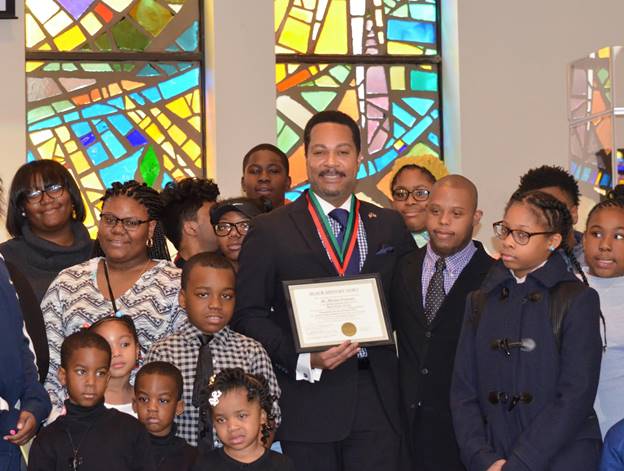 CHICAGO, Illinois — The Hon. Michael C. Fountain, Bahamas Honorary Consul to Chicago, was honored as the first African American Hero award recipient for their 2016 celebration of Black History Month by The Life Center Church of God In Christ on February 7, 2016. In accepting the award Honorary Consul Fountain expressed gratitude to Pastor T.L. Barrett, Jr., Assistant Pastor Dr. Wynetta Frazier and Life Center congregants for their love and support over the last twenty years. Further, he promised to continue the work to make himself worthy of their very special acknowledgement. Pictured from left in the first photo are Mrs. Tanya Fountain, Honorary Consul Fountain and Pastor T.L. Barrett, Jr. In the second photo Consul Fountain is seen with members of the Life Center Children’s Church. 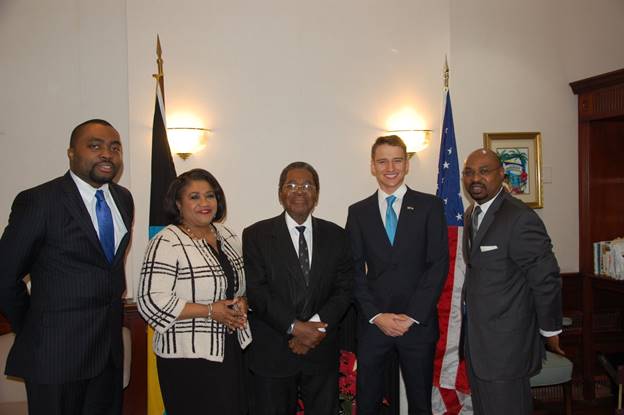 Mr. Knowles is currently a freshman student at Georgetown University’s School of Foreign Service and has a concentration on International Politics. During the Call, he underscored his enthusiasm for study and work in the area of foreign affairs, particularly  with respect to The Bahamas’ place in the global arena,  and committed to close engagement with the Embassy  and Consular Annex  while in Washington DC, where possible, so as to enhance his studies with more applied experience.

Ambassador His Excellency Dr. Eugene Newry, Bahamas Ambassador to the United States, and Mrs. Paulette Zonicle, Bahamas Consul General to Washington, D.C., both cited Mr. Knowles’ past extracurricular activity and chosen field of study as evidence of his passion for public service and expressed hope that he would continue to engage with the work and activity of the Embassy and Consular Annex going forward. 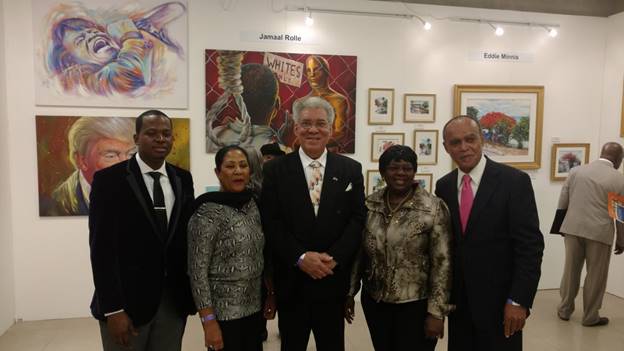 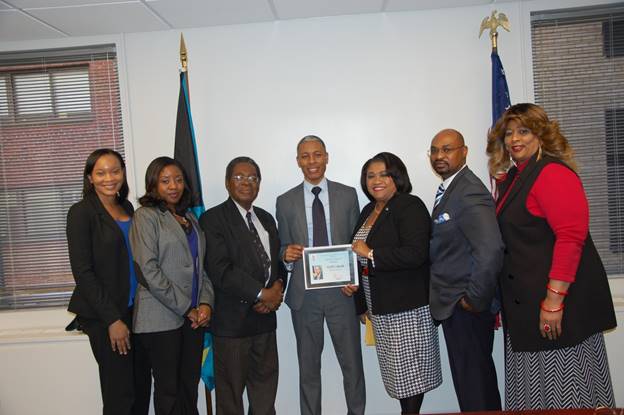 WASHINGTON, D.C. — Bahamas Consul General to Washington, D.C. Paulette Zonicle has introduced a new annual initiative at Bahamas Embassy Consular Annex to show her appreciation for the hard work that her staff does on a daily basis.

At a staff luncheon held on Friday, February 5, 2016, at the Consular Annex, 1025 Vermont Avenue, N.W., Administrative Assistant Felipe Major was named Employee of the Year for 2015.

Mr. Major, who began working at the Consular Annex in April of 2014 and is assigned to the visa and passport section, was presented with a certificate and a monetary gift.

Describing Mr. Major’s output of work as exemplary, Consul General Zonicle said he is dependable and “his willingness to work hard and go beyond the call of duty should be applauded.”

“Mr. Major ensures that prompt and courteous service is given to the general public every day,” Consul General Zonicle said, and encouraged him “to continue his good works and assist in generating revenue for our beautiful Bahamas.”

His Excellency Dr. Eugene Newry, Bahamas Ambassador to the United States, and Deputy Chief of Mission Chet Neymour also congratulated Mr. Major and encouraged him to continue to excel in doing his job to the best of his ability. 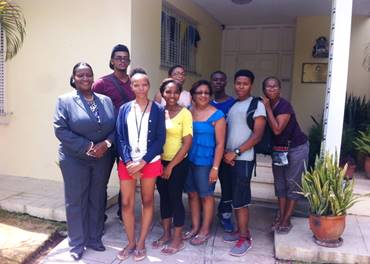 Ambassador Alma Adams welcomed a group of Bahamian Medical students at the beginning of the fall term. The students are currently pursuing careers in the field of Medicine at the Latin American Medical School (ELAM) which is located in Santa Fe, western Havana. The Embassy of the Commonwealth of The Bahamas extended its wishes that the students will have another successful school year. 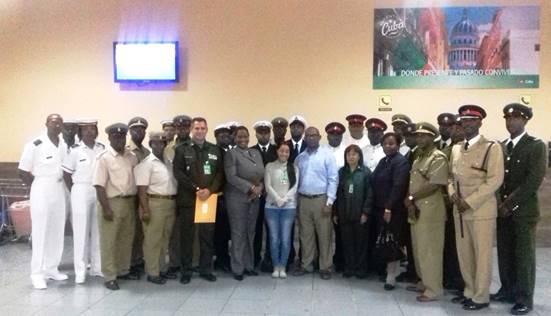 Ambassador Alma Adams and Consul Deborah Saunders of the Embassy of The Bahamas in Havana, Cuba and representatives from the Cuban National Canine Institute received the Delegation upon arrival at the Jose Marti International Airport, in Havana.

The Course, which is scheduled to end on 30th June, 2016 will serve to certify the candidates as internationally certified K-9 handlers and/or trainers. The Course signifies another milestone in continued bilateral relations between the Commonwealth of The Bahamas and the Republic of Cuba.

Pictured above: The arrival of the Delegation of Bahamian Law Enforcement Officers headed by Mr. Carl Smith of the Ministry of National Security at Jose Marti International Airport. They were received by Her Excellency Alma Adams, Ambassador of the Embassy of The Bahamas in Havana, Cuba and Officials of the Cuban National Canine Institute. The officers represent: the Royal Bahamas Defence Force, the Royal Bahamas Police Force, the Bahamas Department of Correctional Services, the Bahamas Immigration Department and the Bahamas Customs Department. 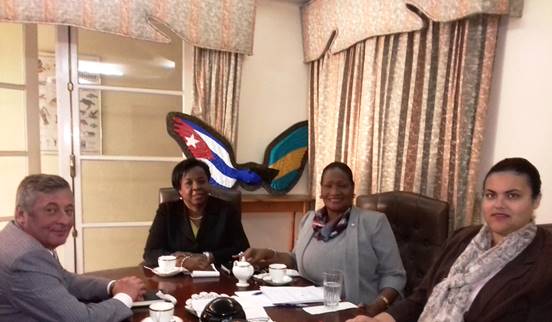 On 19th January, 2016 Mr. Sergey Y. Reshchikov, Minister Counselor of the Embassy of the Russian Federation in Havana, Cuba called on Her Excellency Alma A. Adams, Ambassador of the Commonwealth of The Bahamas in Havana, Cuba to discuss highly pertinent bilateral matters, namely, in the sphere of international candidatures.

During the meeting Ambassador Adams also expressed The Bahamas’ solidarity with the international community in the fight against global terrorism in light of the crash of Metrojet flight 9268 which carried mainly Russian passengers. Minister Counselor Reschchikov conveyed his appreciation in that regard and also expressed a great interest to visit The Bahamas and requested details regarding Diplomatic Week which is held annually in October. Ambassador Adams was delighted to share details regarding Diplomatic Week and hopes that Officials from the Embassy of Russia will join other non-Resident Ambassadors and High Level Officials stationed in Cuba with non-Resident accreditation to The Bahamas, who are already active in Diplomatic Week. 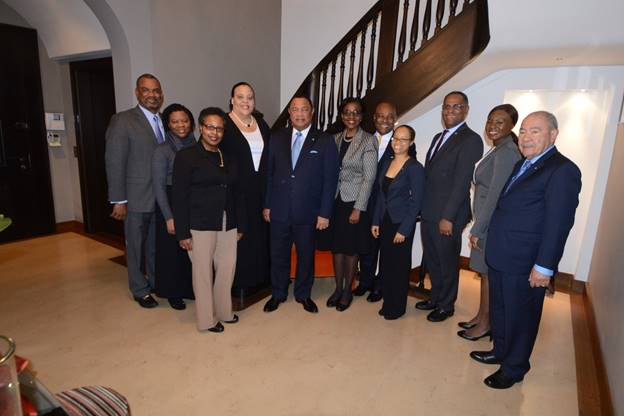 PrevPreviousWHAT’S GONNA HAPPEN TO FREEPORT?
NextTHE PRESS IN THE BAHAMAS GETS WORSENext