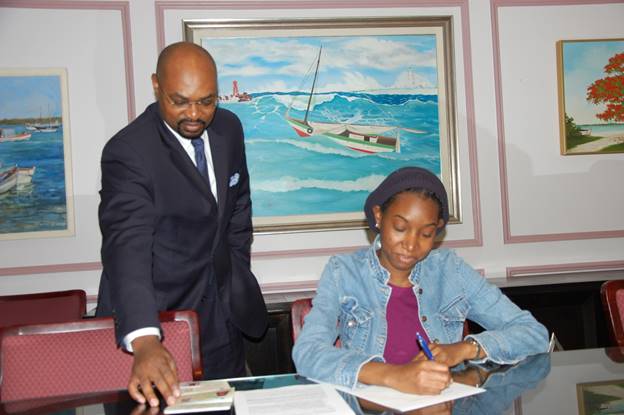 WASHINGTON, D.C. – Preparations have been made for eligible Bahamian citizens to register and to vote overseas in the upcoming Constitutional referendum in an Advanced Poll on Tuesday, May 31, 2016. Jennille McDonald, a student at American University here is D.C., decided that she wanted to be among those Bahamians in the diaspora who took advantage of the opportunity provided to vote abroad and visited The Bahamas Embassy, 2220 Massachusetts Avenue, N.W., to register for the upcoming poll. Jennille is the daughter of Mr. and Mrs. Barrett McDonald of Nassau and the granddaughter of Rev. Norris H. McDonald. She is seen registering in the board room of the Embassy as Mr. Chet Neymour, Deputy Chief of Mission/Revising Officer, looks on. Advanced voting will commence at the Embassy on May 31 precisely at 8:00 a.m. (EDT) and will close at 6:00 p.m. (EDT). 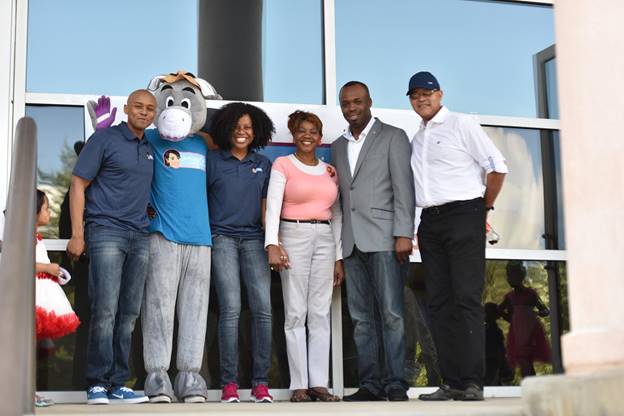 ATLANTA, Georgia — A young Bahamian-born entrepreneur and his wife are having tremendous success with a company they launched in Atlanta four years ago, so much so that last year they expanded their business to the Kansas City, Missouri, Metro Area and have now moved into Omaha, Nebraska.

Tyrone Sawyer II and his wife Jemima co-founded Jemima’s Playhouse LLC, a new age educational company, through which they have “introduced a fun, innovative way to reach children between the ages of two and 12 years old.”

“We have seen a tremendous growth in business since we started in Atlanta in 2012,” Mr. Sawyer said.  “We are now expanding into Omaha, Nebraska, our fourth state. Our goal is to continue to grow, have fun with the children, and continue to lead though implementing new, innovative teaching skills.”

“Jemima’s Playhouse is a cultural children’s program that teaches music, foreign languages, and geography through its original songs and unique characters,” according to a press release on the company’s latest presentation.

Among those in attendance was the Hon. Randy Rolle, Bahamas Consul General to Atlanta, who had high praise for the event.

In describing Jemima’s Playhouse’s exciting approach to teaching, the press release notes: “Just imagine a four-year-old student in Atlanta, Georgia, Kansas City Metro Area or Omaha, Nebraska singing, ‘I’m a cool donkey!’, at the top of her lungs with a blissful smile upon her face and her pony tails wagging out of control. But it is happening.  And it is happening with increasing frequency at a variety of kindergarten and elementary schools across Atlanta, Kansas City and Omaha.”

The release notes that “I’m A Cool Donkey!” is the “signature song for the flagship costumed character, Senor Burro©, created by Tyrone Sawyer, a former standout track and field athlete, and his wife Jemima.”

“The choice to teach students through innovative characters has given the Sawyers an interesting platform to introduce each topic,” the release adds.  “Through Jemima’s Playhouse there is Senor Burro© the walking, talking donkey from Mexico who teaches students Spanish.  There is Madame Belle©, the shy cow from France who teaches the children French.  BahamaMan’s© calling is to teach the children social responsibility by engaging them in a fun-filled environment that makes them want to learn.   Each character has its own personality and its own story to tell.  This has made Jemima’s Playhouse a good-choice option for schools that seek new and exciting ways to mold their students and to keep them actively engaged.”

The release adds: “Jemima’s Playhouse has changed the way students learn in a constantly shifting global environment. This ‘cultural appreciation method’ has caught the attention of many schools as they have invited the company to become a part of their schools’ instruction. This has also begun to get the attention of School District Supervisors and many parents who have requested this program for their children. Jemima’s Playhouse has also built close relationships in communities that it serves by offering pro bono services to underprivileged children through its Jemima’s Loving Hearts Foundation©.”

The teaching approach being used by Jemima’s Playhouse was lauded by Mr. Jay Bryan, owner of The Goddard School in Sandy Springs, Georgia.

“I have seen the positive, rich learning environment Jemima’s Playhouse has created with the students,” Mr. Bryan said. “The innovative characters and foreign languages bring joy to my school and that makes it easy for me to support Jemima and Tyrone in this venture.”

Tyrone Sawyer II is the son of Tyrone Sawyer, Senior Director of Airlift for The Bahamas Ministry of Tourism, and the late Caroline Sawyer. He attended Gambier Primary School and graduated as Head Boy in 1997, then went on to St. John’s College High School in Nassau, from where he graduated in 2003 as Head Boy.

In 2009 he graduated with a Bachelor of Science from the University of New Haven (New Haven Ct) and Nova Southeastern University in 2012 with a MBA.

CAPTION
Tyrone Sawyer II (left), his wife Jemima Sawyer (second from left) are pictured with the Hon, Randy Rolle (second from right), Bahamas Consul General to Atlanta. At right is Tyrone Sawyer Sr., Senior Director of Airlift for The Bahamas Ministry of Tourism. 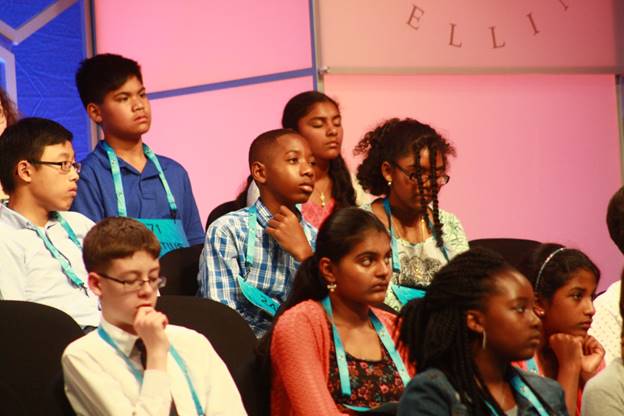 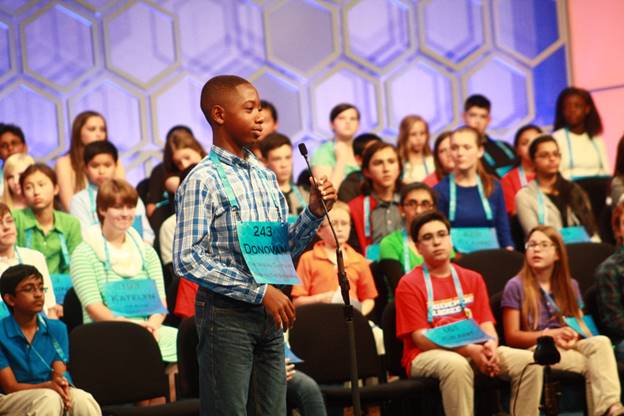 WASHINGTON, D.C. — Although he did not advance to the finals of the 2016 Scripps National Spelling Bee, Bahamians have every reason to be justly proud of the remarkable performance of Bahamas National Spelling Bee Champion Donovan Aaron Butler in the highly competitive annual competition held at the Gaylord National Resort and Convention Center in National Harbour, Maryland, near Washington, D.C., May 22 – 27.
An indication of just how challenging is the longest running educational promotion in the United States is the fact that among the 284 spelling champions that participated in this year’s competition, one was competing for fourth time, there are eight three-year repeaters, and 61 two-year repeaters.
Donovan did extraordinarily well in spelling the two words given to him in the preliminary spelling rounds, but he did not score high enough in the written test to be included among the 45 finalists after the scores of the written test were combined with the scores from the two spelling preliminary rounds.
Since it was introduced by the Scripps National Spelling several years ago as part of its elimination process, the written test has been the Achilles heel of Bahamian spellers, as was the case last year when Bahamas champion Charles Hamilton also correctly spelt his two preliminary words, but did not make the finals because he did not score high enough in the written test.
However, Hamilton’s outgoing personality and witty on-stage comments, one of which resulted in him being featured on the “Good Morning America” television show, has enshrined him in Scripps National Spelling Bee folklore, with a photo of him promoting this year’s Spelling Bee in the hallway outside the convention center where this year’s spelling bee was held.
Given the fact that Bahamian spellers are having a hard time doing well in the written test, as the individual responsible for introducing the Scripps Spelling Bee to The Bahamas when I was Editor of the Nassau Guardian in 1998, I would like to suggest that the Ministry of Education make a serious effort to implement a proposal I made while I was still involved in helping to stage the Bahamas National Spelling Bee.
What I suggested at the time was that the Ministry establishes Spelling Bee Clubs in all of our public schools as an extracurricular activity and organize end-of-term spelling competitions for them. If it is true, and I certainly think it is, that spelling encourages students to read more, surely such an activity would vastly improve the anemic “D” average performance by far-too-many students in our schools. What’s more, as my journalistic mentor Sir Arthur Foulkes repeatedly told me while encouraging me to read more when he was City Editor at The Tribune in the early 1960s and I was a young reporter, “Reading is the basis of all knowledge.”
Of course, there is a body of opinion that many of today’s teachers are not as committed to imparting knowledge to students in their classrooms as teachers in The Bahamas once were and would not volunteer their time to supervise Spelling Bee Clubs for an hour or so after school. Assuming this is true, then the Ministry should make a commitment to pay them for their after-school work. If there is no money in the budget for such an activity, then an organized appeal should be made to caring people in the business community to raise the necessary funds for this effort on an annual basis.
Everyone involved in education agrees that the National Spelling Bee has had a tremendous impact on the educational system in The Bahamas over the years, and every year we have produced some excellent spellers, but none of our champions has yet to make it to the finals. By contrast, Jamaica’s champions have made it to the finals just about every year and actually its 1998 champion Jody Anne Maxwell was the overall winner.
At the very least, I hope that Minister of Education, Science and Technology Jerome Fitzgerald meets with the persons at his Ministry who have responsibility for organizing the Bahamas National Spelling Bee and get their input into whether they think Spelling Bee Clubs would help to more The Bahamas’ program to another level.
The Scripps National Spelling Bee is administered on a not-for-profit basis by The E.W. Scripps Company and local spelling bee sponsors in the United States, American Samoa, Guam, Puerto Rico, the U.S. Virgin Islands, and Department of Defense Schools in Europe; also, The Bahamas, Canada, Ghana, Jamaica, Japan and South Korea. Its primary purpose is “to help students improve their spelling, increase their vocabularies, learn concepts, and develop correct English usage that will help them all their lives.”
Oswald T. Brown is the Press, Cultural Affairs and Information Manager with the Embassy of The Bahamas in Washington, D.C.

CAPTION
Bahamas National Spelling Bee Champion Donovan Aaron Butler is seen waiting for his turn to spell during the third round of the Scripps National Spelling Bee at the Gaylord National Resort and Convention Center in National Harbour, Maryland, near Washington, D.C., on Wednesday, May 25, 2016. (Photo by Elisabeth Ann Brown) 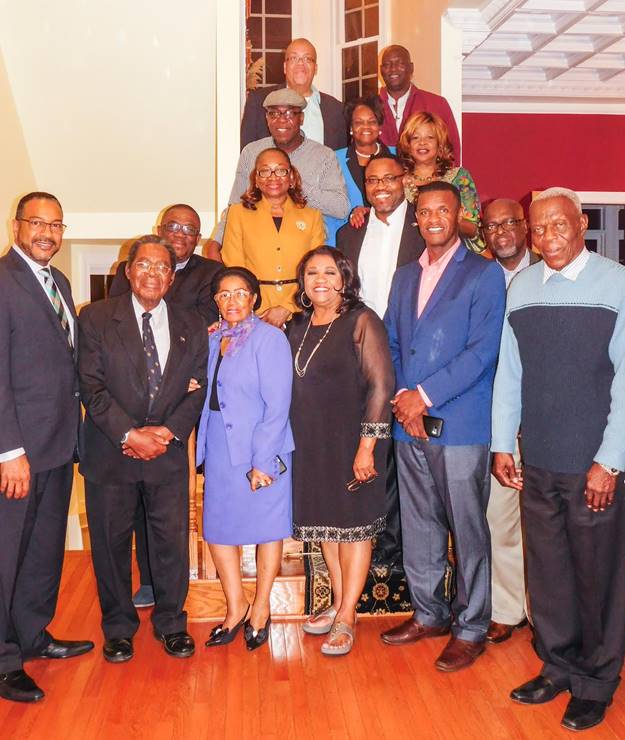 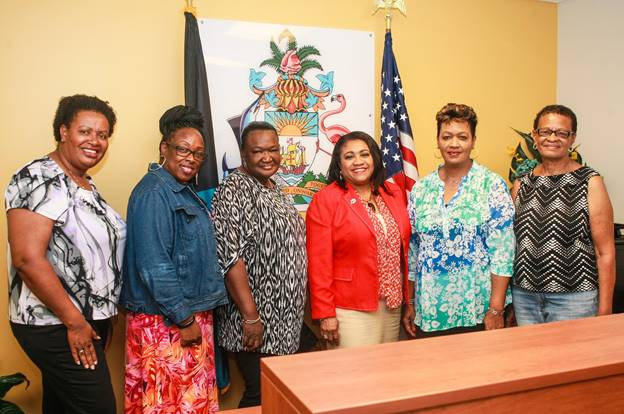 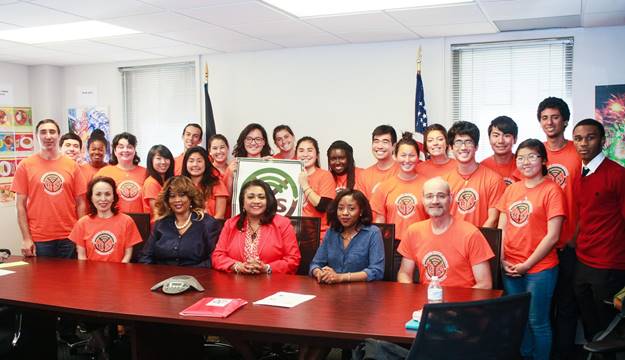 WASHINGTON, D.C. — Religious Youth Service, sponsored by the Universal Federation of Peace (UPF), made a courtesy call on Mrs. Paulette Zonicle, Bahamas Consul General to Washington, D.C., on Thursday, May 26, 2016, at the Bahamas Embassy Consular Annex, 1025 Vermont Avenue, N.W. UPF chapters organize Religious Youth Service projects that offer service-learning opportunities with a special focus on developing personal leadership and peacemaking skills. Through living together and providing altruistic service in a community, participants demonstrate that it is possible for our global human family to come together in peace for our mutual wellbeing. Pictured seated from left are: Tomiko Duggan, Director of Public Relations for UPF; Faith Maycock, Third Secretary/Vice Consul, Bahamas Embassy Consular Annex; Consul General Zonicle; Janine Gibson, Second Secretary, Bahamas Embassy Consular Annex; and one of the organizers for the student group. 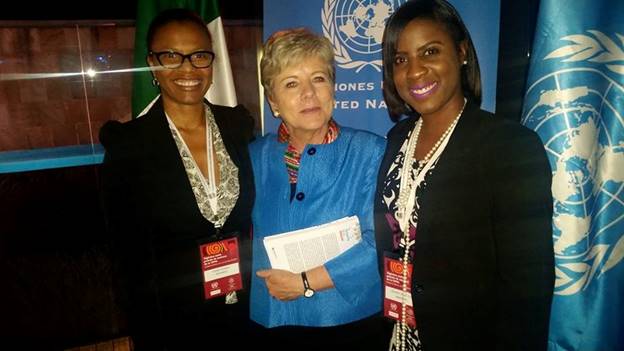 Bahamas UN Mission DPR and AC Ieshia Deveaux with Executive Secretary of ECLAC at the 36th ECLAC Session in Mexico City, 26 May 2016.