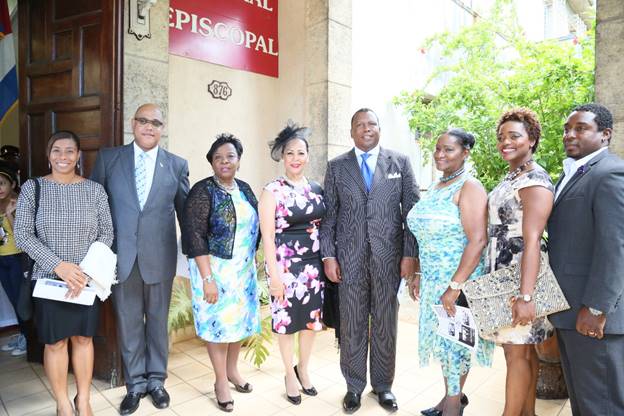 Her Excellency, Alma Adams, Ambassador of The Bahamas to Cuba received our nation’s First Lady Mrs. Bernadette Christie, who led a delegation to Cuba as patron of these celebrations. Mrs. Christie was accompanied by H. E. Mr. Picewell Forbes, Member of Parliament and High Commissioner of The Bahamas to CARICOM Member States, Mr. Leon Bethel, Senior Assistant Commissioner and SuperintendentDennis Sturrup of the Royal Bahamas Police Force (RBPF) and officers of the RBPF Pop Band.  On hand also to participate in these festivities were Mr. Edison Sumner and members of the Bahamas Chamber of Commerce, as well as a number of Bahamian Medical doctorswho recently graduated from The School of Medicine of Cuba, located in the Provinces of Artemisa, Santiago de Cuba and Camaguey.

The Re-enactment of the Flag Raising Ceremony was a spectacular and momentous occasion for The Bahamas, painted against the backdrop of the prestigious 5th Avenue, better known as President’s Way, which is also the centre thoroughfare of pomp and circumstance for all things government and diplomatic.

It was here that a brand new Bahamian flag was commissioned and presented to Corporals Treco Johnson and Vernon Thompson of the RBPF by Mrs. Christie, and hoisted proudly to the melodious sounds of “One God, One People, One Bahamas” by the Pop Band, and in the presence of Cuban Government Officials including H. E. Mrs. Ismara Vargas Walter, Ambassador of Cuba to The Bahamas, members of the Diplomatic Corps, other Bahamians, family members and friends of The Bahamas.

In true Bahamian style, this event was immediately preceded by a glorious and invigorating Service of Thanksgiving held at the Historic Episcopal Cathedral of the Most Holy Trinity in Vedado.  The service was presided over by the Rev’d. Jose Angel Gutierrez, Dean of The Cathedral, and featured the presentation of colours by the RBPF. Remarks were offered by Mrs. Christie, Ambassador Adams and H.E. Forbes, and a musical rendition by Mr. John R. Darville, former Youth Ambassador to CARICOM.

“It was a remarkable moment” Ambassador Adams noted, “today a new and exciting era has been embarked upon and as a people we are well poised to engage in the further strengthening of ties between The Bahamas and the Republic of Cuba.”

The festivities culminated with an evening of grandeur, as over 200 guests were in attendance at the Official Residence of The Bahamas, located in Siboney, Playa, namely, the Minister of Justice of Cuba, Maria Esther Reus Gonzalez who led a contingent of high-ranking Cuban officials present at the event. The RBPF Pop Band erupted with rich Bahamian music and everyone danced all night long, concluding with the electric slide and The Bahamas’ National anthem.

The lush décor, presented in the national colours of The Bahamas provided an appropriate ambiance for the celebrations; the menu which included rich Bahamian dishes and a special cake cutting, set the agenda for the evening’s celebrations.  Mrs. Christie was on hand to present awards of appreciation to all employees of the Embassy, including special recognition awards for the staff members who would have served from the inception of the Embassy.

The Embassy of The Bahamas in Cuba maintains a very important role in the diplomatic community, providing access to more than one hundred Missions of other countries and some thirty (30) international organizations present in Cuba.  Ambassador Adams is the first woman Ambassador to the Republic of Cuba and succeeded Their Excellences Dr. Davidson Hepburn, Sir. Arthur Foulkes, Mr. Carlton Wright and Mr. Vernon Burrows. 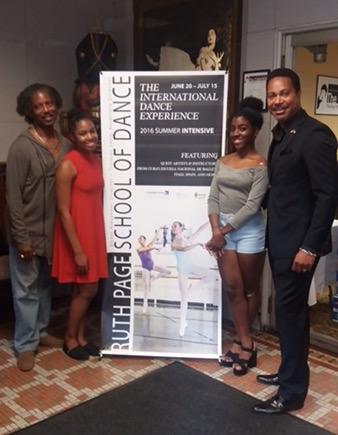 Bahamian dance students Cai Strachan and Kennedy Lightbourne were in Chicago with their instructor Lawrence Carroll, of the Lawrence Carroll Dance Academy in Nassau, to participate in this annual exhibition for developing artists.
Shawna Strachan, who was also in Chicago with her daughter Cai, Shawna Strachan noted that the 2016 performance was the third consecutive year of successful auditions, intensive training and international dance experience for 14-year-old Cai, who has been working with Mr. Carroll since the age of three.

The Ruth Page Foundation and its arts centre has since 1971 committed its resources to creating a dance destination in Chicago, ensuring that children and dance artists the world over have a place to study, work and perform at the highest level of excellence. 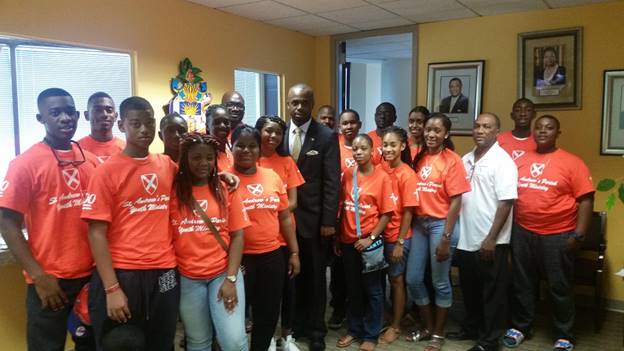 ATLANTA, Georgia — During their recent visit to Atlanta, 14 students from Exuma, under the leadership of Father Ethan Ferguson of St. Andrews Parish (back row near coat of arms), paid a courtesy call on the Bahamas Consulate, where they met with Consul General Rolle (centre) and Mr. Edward Archer (third from right) of the Ministry of Tourism as part of their visit. While in Atlanta they also visited Coca Cola, Georgia Aquarium, did a college tour and took part in The Bahamas independence celebrations. 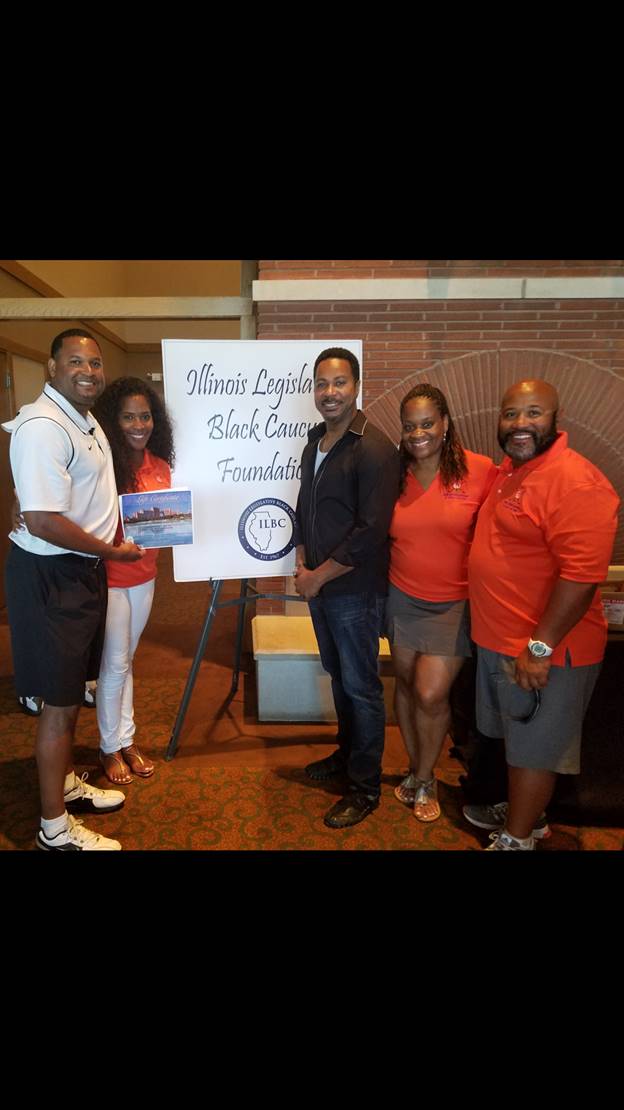 CHICAGO, Illinois — Hon. Michael C. Fountain, Bahamas Honorary Consul to Chicago, working closely with the Bahamas Ministry of Tourism, supported the work of a key stakeholder in his jurisdiction by donating a gift certificate stay to the iconic Atlantis property at the Illinois Legislative Black Caucus Foundation Scholarship and Golf Outing on Tuesday, July 19, 2016.

Since 2002, the ILBCF has given deserving students scholarships to assist them in advancing their academic and career goals. This year the ILBCF presented 62 students $1000 each, providing more scholarships in 2016 than any previous year, bringing its disbursement total to over $420,000 in awards since the organization’s inception. In addition, one of the application requirements mandated an updated voter registration file, which registered over 340 students to vote.

Established in 1968, the mission of the Illinois Legislative Black Caucus is to ensure that the interests of all Black citizens are given equitable representation in the Illinois General Assembly. 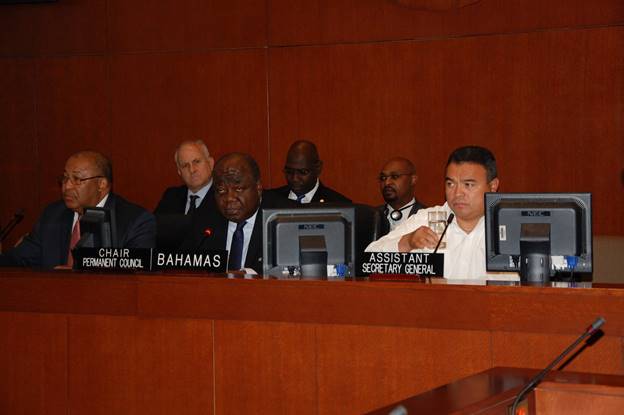 WASHINGTON, D.C. — In response to a request from the Government of Haiti, His Excellency Dr. Elliston Rahming, Bahamas Ambassador and Permanent Representative to the Organization of American States (OAS) and Chair of the OAS Permanent Council, convened a special meeting of the Permanent Council on Wednesday, July 20, 2016, in the Simon Bolívar Hall of the OAS headquarters at 17th Street & Constitution Avenue, NW

Haiti requested the meeting so that its Minister of Foreign Affairs Pierrot Delienne could provide the OAS with “a better understanding of the evolving political and electoral situation” in his country.

The request came in the wake of a statement on July 15 by OAS Secretary General Luis Almagro expressing deep concern over the demonstrated inability of Haitian parliamentarians to meet in the National Assembly to decide on how best to guarantee institutional stability and encourage the continuation of the electoral process.

“Given the importance of the challenges and the serious risks to the country’s stability, it is particularly troubling that the meeting of the National Assembly set for yesterday, July 14, was cancelled, once again, due to a failure to reach quorum,” Almagro said in his statement

“Haiti can no longer afford to be the hostage of dilatory tactics and other ploys,” the OAS Secretary General added. “The situation is critical. It is time to make a decision that should have been made long ago. It is imperative for Haitian political stakeholders, including Parliamentarians and those provisionally governing the country, to fully assume their responsibilities towards the nation. The interests of the Haitian people must supersede partisan interests. Every effort should be made for the presidential, legislative and local elections to be held without delay and in a calm atmosphere.”

In his 17-plus minutes address at Wednesday’s special meeting, Foreign Affairs Minister Delienne highlighted the “significant progress that has been made” and the “tangible results” that have been achieved, noting that the process for an election is now solidly on track.

Among other things, he revealed that there are 27 presidential candidates representing all the major parties and an election date has been set for October 9, 2016, with a second round of voting set for January 8, 2017, if necessary. He said the Electoral Council “is doing all it can to stick to the timetable.”

Ambassadors and Permanent Representatives to the OAS from the various member states took turn welcoming the Haiti Foreign Minister and expressing support for the democratic process in Haiti.

He noted that The Bahamas, for its size, is the country in the world with the largest percent of its population of Haiti origin, some 20 percent, adding that “some of our most distinguished citizens are of Haitian origin.”

“We Bahamians have daily commerce with our neighbour,” Dr. Newry said. “One must pose the question as to the root causes of the political instability. Among the principal of these is Haiti being economically the country with the greatest amount of natural resources of any country in the region and therein lies, in part, it being manipulated, resulting in political instability.”

It is in the region’s interests, Dr. Newry said, that the “Organization of American States use all of its instances and agencies to come to the aid of our sister Caribbean country and founding Member State.  The Bahamas associates itself with these goals.”

CAPTION ONE
His Excellency Dr. Elliston Rahming (centre in front row), Bahamas Ambassador and Permanent Representative to the Organization of American States (OAS) and Chair of the OAS Permanent Council, presiding over the special meeting of the OAS Permanent Council on Wednesday, July 20. At left is Haiti’s Minister of Foreign Affairs Pierrot Delienne and at right is OAS Assistant Secretary General Nestor Mendez. At right in back row is Mr. Chet Neymour, Deputy Chief of Mission, Bahamas Embassy. 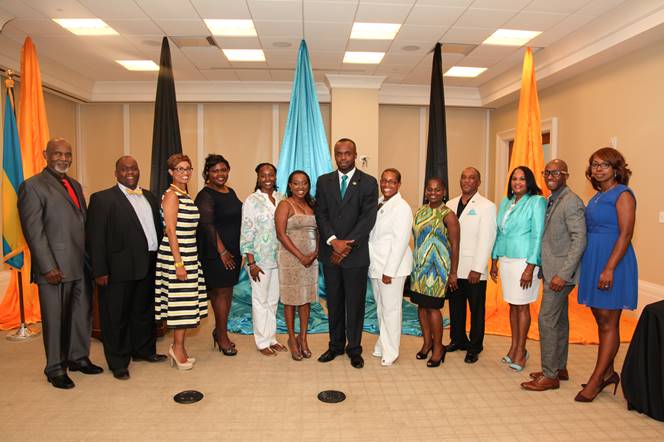 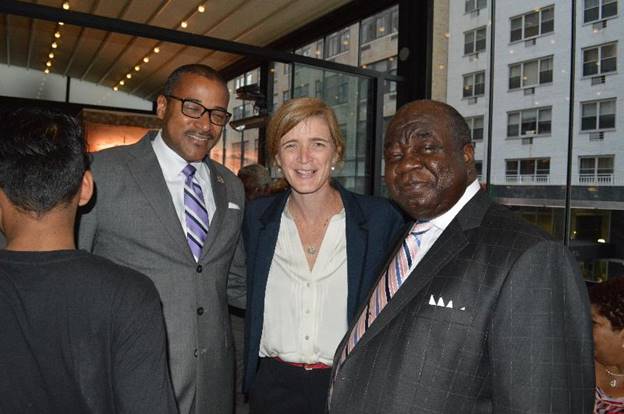 LOS ANGELES — The Bahamian Diaspora in California, their families and friends celebrated the 43rd anniversary of The Bahamas’ attainment of independence from Great Britain with a picnic and flag-raising ceremony in Griffith Park, the largest park in Los Angeles, on Saturday, July 9, 2016.

The event brought together about 75 Bahamians from across the greater Los Angeles area along with a few who travelled quite a distance from Northern California. This was the first Independence Day celebrated under the auspices of the Hon. Cedric A. Scott, Bahamas Consul General to California, who said the occasion will be used annually for Bahamians in Los Angeles to come together and celebrate their common culture.

The event started with the singing of the Bahamian national anthem followed by a moment of silence for those whose lives were lost to terrorism and gun violence, their families and loved ones in Turkey, Bangladesh, Iraq, Yemen, Jordan, Lebanon, Saudi Arabia, Malaysia, Indonesia, Israel, Nigeria, Minneapolis, Barton Rouge and Dallas.

The festivities included the sharing of Bahamian home cooked dishes, culminating in a first ever cook-off contest. The dishes ranged from macaroni and cheese, conch salad, chicken souse, peas and rice, curry chicken, spiced chicken, and many other wonderful dishes.

Three equal prizes were awarded. One prize was won by Amalaye Oyake for his chicken souse. He also contributed some beautiful fresh picked greens from his garden for a sumptuous salad.  Another prize went to Gregg White for his authentic peas and rice. Also winning an award was Yuki Scott, who made a peas and rice and crab dish and introduced her Bahamian finger jello, representing the colours of the Bahamian flag.  An honourable mention went to Jackie Edwards for her delicious Jamaican/ Bahamian chicken dish.

The day was warm and filled with laughter and talk. Although living in a distant land, Bahamians abroad love to gather and share their commonality. The air was filled with Junkanoo drums aptly played by Adrian Lunn and spontaneous dancing erupted; children playing and grownups sharing — a good day for all