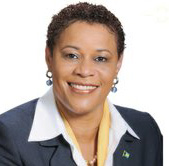 NASSAU, The Bahamas – As the Financial Services sector seeks to find ways to bring innovation to the industry, several new initiatives are in the pipeline for implementation. One such initiative is the development of the country as a trade hub in Chinese Currency. This, according to the Minister of Financial Services, the Hon. Hope Strachan would give the sector a major boost. The Minister spoke of the move during her contribution to the 2016/2017 Budget Debate, June 8, 2016.

Minister Strachan said that the success of this project would “translate into an entirely new frontier” of financial services and trade business for the country and would be a “monumental achievement” in making The Bahamas the Renminbi (RMB) Trading Hub for the entire region.  She said that the hub would facilitate financial transactions and eliminate reliance on the US Dollar.

“The rationale is that the Bahamas Government, Bahamian businesses, financial institutions as well as those throughout the region would have the ability to engage in less costly and less time-consuming processes related to transactions involving the direct clearing and payment of the Yuan currency in The Bahamas,” she said.

“It would eliminate reliance on the U.S. Dollar and the transacting of business through the United States.  The creation of a platform for the Yuan to trade freely with the Bahamian Dollar will allow for international trade finance, and trade and investment to increase significantly.“

She said further that as foreign businesses set up shop in the country, the potential to increase business activity would be further enhanced. It would also allow for an efficient business framework, underpinned by factors ranging from The Bahamas’ position as a well-respected international financial centre to its strategic geographic location to North American and Latin American markets; and it would facilitate trading without the hurdle of an additional layer of foreign exchange cost and currency risk, and have transactions settled within a favorable time zone (Eastern Standard Time).

“An increase in international trade finance, trade and investment would create jobs for Bahamians and strengthen the Bahamian economy.  Economic slowdown in the United States magnifies the importance of the need to diversify cross-border trading with other markets around the world.  Further, new financial institutions would be established in The Bahamas, including the introduction of the first Chinese bank to the country. The establishment of the RMB Trading Hub in The Bahamas would help to further diversify our financial services sector and position The Bahamas favourably, from a global perspective, as an even more appealing place to invest and do business.”