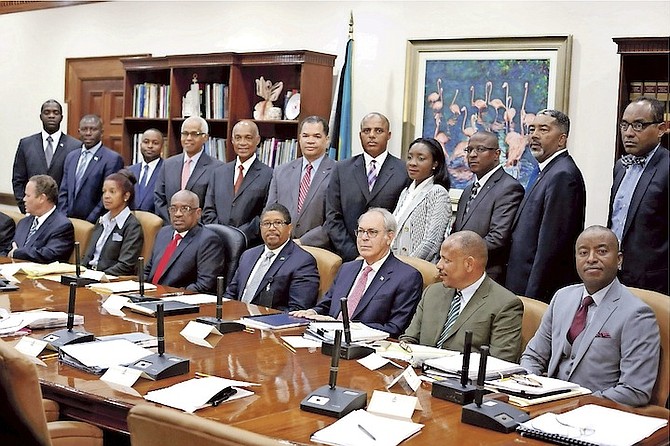 They are descendants of slaves, all of them.  Even Brent Symonette, who passes for white in this society, is the descendant of a slave.  How then can these descendants of a slave, using the power vested in them under the National Honours Act, make Sir Roland Symonette, the Leader of the racist United Bahamian Party, a national hero of the Bahamian nation.  They are all Uncle Toms.

You can one supposes forgive Brent Symonette; that was his daddy, so one supposes that he was so blind that he could not see.  He of course is not one who stands very much on the principle of the rule against self-dealing.  After all he was fired for it before by Hubert Ingraham.  We are offering him that out because he should not have sat in Cabinet and given an award to his pa.  Even if he could not see how his pa was the leader of the group that opposed the march from slavery to majority rule.

The Chairman of the PLP made a very legalistic point.  Senator Fred Mitchell sits on the Advisory Committee for National Honours.  So the first thing that the FNM tried to pull was that Mr. Mitchell was complicit in the recommendation. That is a lie.  Mr. Mitchell said that the fact is in law the appointments are the Prime Minister’s appointments.  So the person who owes an explanation to the country is the Prime Minister.

You will remember that the Prime Minister campaigned to become leader of the FNM by saying he would not allow Bay Street to dictate what happened in the FNM. He lied.  Even if up to now he was able to fool the Bahamian public, it is clear with this appointment of  Roland Symonette as a National Hero, Mr. Minnis is the Chief Uncle Tom.

There are others who one cannot understand: Elsworth Johnson, the Minister of State for Legal Affairs.  He was always boasting about his daddy Oscar Johnson.  If you knew Mr. Johnson, he would not have stood for this.  The man who on the debate on the speech from the throne called Sir Gerald Cash, a roasted breadfruit.  Black on the outside but white on the inside.  One wonders what he would say about his son Elsworth today.

The problem is that you have legitimate black UBPs like Mark Humes, MP for Ft. Charlotte, who comes from a grandfather who was a pure and unadulterated UBP.  Mr Humes was raised by his grandfather and so cannot help himself. He probably thinks that Lynden Pindling was a mistake for this nation, even as he enjoys the fruits of the nation which Lynden Pindling built and created and which Sir Roland Symonette fought to stop.

The same can be said for the hapless, hopeless Chairman of the FNM Carl Culmer. He claimed that the UBP was responsible for taking the country to independence and that the PLP oppressed Black people before Majority Rule.  You have never met a dumber, and deliberately obtuse public figure.

So there we have it.  The people that Clarence Bain dreaded: the weak kneed apologetic Negros are in charge,

They have made a national hero of a man who fought independence.  Supported the movement in Abaco that wanted to break up The Bahamas.  Fought every step along the way: majority rule, the lowering of the vote to 18, the vote for women. You name it. He opposed it. Fundamentally he opposed the creation of the nation.  A National Hero is a hero of the nation. He did not want a nation. He wanted us to remain a colony. That was Sir Roland Symonette.

The expression for that ladies in gentlemen is not National Hero. The word for that is TRAITOR.